The attorney hired by the Lafayette Parish School Board for a special investigation of Superintendent Pat Cooper has submitted his final report, though it may be another week before the findings are made public.

[Editor's note: This story had been updated to reflect corrected information that LPSB members Kermit Bouillion, Shelton Cobb and Mark Cockerham all met together with the attorney investigating Superintendent Pst Cooper.]

The attorney hired by the Lafayette Parish School Board for a special investigation of Superintendent Pat Cooper has submitted his final report, though it may be another week before the findings are made public. 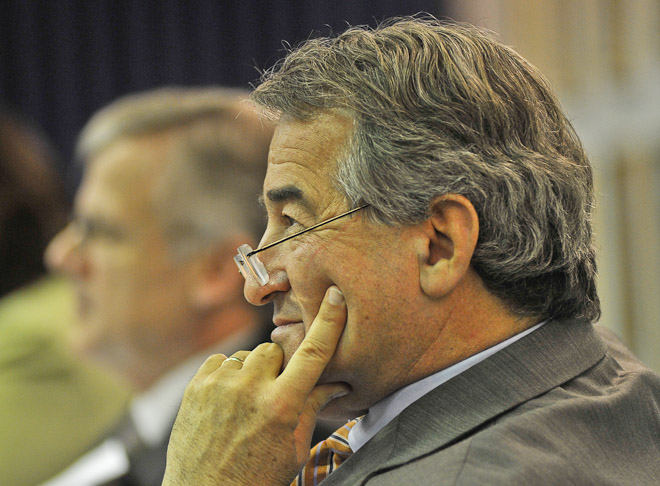 In an email sent to the board Monday afternoon, Cooper says he was contacted earlier that day by the investigating attorney, Dennis Shelton Blunt, requesting a meeting, presumably to discuss the contents of his finished report. Board president Hunter Beasley, in an interview with The Advocate, confirms he's received a copy of Blunt's findings, but did not disclose any particulars, only that he had called for a special meeting to discuss the matter Tuesday night.

"This is concerning [Cooper] and as far as I'm concerned, I'm keeping the information confidential," Beasley tells the Advocate. "It's up to him if he wants to release the information. I'm going to instruct the board members when they get the report that it's confidential information."

Cooper, in his email, requested Beasley reschedule the special meeting since he'll be out-of-town until Wednesday, and cited a provision in his contract that grants him the right of attendance at all board meetings.

"I cannot attend the meeting on Tuesday night and also this cannot be considered an emergency allowing for a meeting to be called within 24 hours," writes Cooper. "I am requesting that the meeting be cancelled as is called for in my contract ... Additionally, I just got a call from Mr. Blunt ... to set up a meeting with him on [Tuesday], but I cannot as I will be out of town. I would be happy to talk to Mr. Blunt on Wednesday so this could be taken up on Wednesday night."

At the time of his interview Monday evening with The Advocate, Beasley wasn't sure whether Tuesday's special meeting would go on without Cooper, saying he was awaiting an opinion from the board's legal counsel, attorney Bob Hammonds. As of this morning [Tuesday], the meeting calendar on the board's web site had no listing for a special meeting, though according to the Advocate, the item did appear last night, indicating that Beasley has likely postponed the board's discussion on the special investigation to allow for the superintendent's attendance.

Board member Kermit Bouillion, who spoke by phone Tuesday morning with The IND, says he feels out-of-the-loop with what's been going on with the superintendent's investigation. Bouillion has remained one of the board's few loyal supporters of Cooper's since his arrival as superintendent in 2012, and that, he says, is likely the reason the board's anti-Cooper members - this includes Beasley, Mark Allen Babineaux, Tommy Angelle, Rae Trahan, Tehmi Chassion and Greg Awbrey - have been so tight-lipped on all things concerning the special investigation, including even their reasoning for approving and funding a probe that many have called an overly-expensive "witch hunt" aimed at terminating Cooper. Those board members have even refused to share their reasoning for the investigation with Bouillion and Cooper's other two supporters on the board, despite repeated requests during board meetings over the last few months asking for some disclosure.

Even a state law requiring public bodies to cite a specific set of reasons for hiring special legal counsel to conduct such investigations hasn't phased the school board, leaving the public also scratching its head as to what's going on in the minds of the anti-Cooper board members. Despite their unwillingness to divulge their complaints, the main reason for the investigation, arguably centers on the superintendent's refusal to fire Thad Welch - who was hand-picked by Cooper as the special assistant to the superintendent for facilities, maintenance, grounds and transportation - over his lack of a high school diploma.

While it's unclear what will come from the release of attorney Blunt's investigative report, Bouillion says based on emails received between last night and this morning concerning the probe's completion, he expects the special meeting will be rescheduled for sometime next week, either on Wednesday or Thursday.

One issue of concern, adds Bouillion, is that when the special meeting agenda was originally posted Monday evening, it also included a resolution calling for the board to take action on Blunt's investigation. For Bouillion, that item, which as we've noted has since been removed from the board's meeting calendar, could be an indication that an attempt may be in the works to use Blunt's findings as a step toward Cooper's termination.

As far as Cooper's concerned, the fact that Blunt has already finished his work is a pretty big surprise, especially considering that he never consulted with the superintendent during the course of the investigation.

"I don't know how Mr. Blunt can even have a report if he hasn't talked to me and gotten my side," says Cooper in an interview with The Daily Advertiser. "How can you have a report if you haven't gotten both sides of the issue?"

Regardless of the report's findings, Cooper's termination, if that is indeed the board's end game, will not come without a fight thanks to a federal lawsuit filed two weeks ago by Cajundome Director and longtime education advocate Greg Davis, which calls for the disqualification of board members Tehmi Chassion and Mark Allen Babineaux from voting on any measures involving Cooper's future employment with the school system. The suit, which also addresses the ongoing budget stalemate, provides detailed documentation of each board member's bias toward Cooper with examples stretching back over the last two-plus years.

For more on the lawsuit, and a look at why neither Chassion nor Babineaux should have any say on Cooper's future, click here and here.