The intimate documentary Pete Seeger: The Power of Song re-introduces the pioneering musical radical just when we might need him the most. Pete Seeger never shied from being the center of a song circle. As an 8-year-old kid, he used to bring his ukulele to school and get the kids to sing along with his versions of 1920s pop songs. Eighty years later, he’s still conducting sing-alongs in classrooms, at street-side protests and in concert halls. “He was a show-off from the beginning,” recalls Pete Seeger’s brother John with a smile. 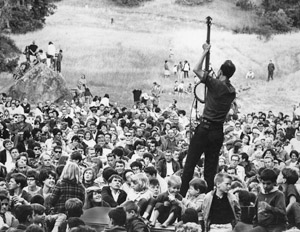 Yet being the center of media attention — that’s another matter. The much-lauded documentary Pete Seeger: The Power of Song — which receives its national and local television premiere this week as part of the PBS American Masters series — took years to get off the ground. Director Jim Brown, who’s known Seeger since Brown was a teenager, had been trying to talk the musician into the project since the early 1980s.

“He’s a little bit of a contradiction,” Brown says, speaking by phone from his New York office. “He wanted to be inspirational, he wanted to have a platform for his message, but he’s terribly shy about being a celebrity and everything that goes with it.”

A frustrating pattern developed: Brown and others would get funding to make a film, and Seeger would back away. In the meantime, Brown earned three Emmy Awards for related projects, including movies about Pete Seeger’s former group The Weavers and the song “We Shall Overcome,” which Seeger helped adapt into the anthem of the Civil Rights movement. Finally, in 2003, Brown was interviewing Seeger for a PBS documentary about Peter, Paul and Mary, when he noticed something unusual.

“He started talking a lot about himself,” Brown recalls. “So I’d let it roll. Bush had been elected and he said, ‘You know, I’ve been rethinking the idea of the biography.’”

The result is a revealing and affectionate portrait of a musician and activist. Forget the soppy four-part harmonizers a la the mockumentary A Mighty Wind — the brand of folk music practiced by Seeger is as gritty as it is idealistic. The Power of Song follows Seeger into demonstrations and riots, reveals a one-time assassination plot on his life, and includes archival news footage that shows him standing up to the House Un-American Activities Committee in 1955 and refusing to name names.

That last action meant that Seeger wouldn’t appear on American commercial television for more than 17 years. Even after the blacklist was lifted, the censors kept at it: Tommy Smothers appears in the film to recall how Seeger’s performance of an anti-Vietnam War song on the Smothers Brothers’ variety show initially landed on the cutting room floor.

Another Seeger legacy might be less controversial but is no less radical. “His message both musically and politically was to participate,” Brown says. “That making music was part of the human condition and somewhere along the line in the 20th century, we lost the ability to use songs as a way of making community and family, and paid other people to do it for us.”

This belief led Seeger and others — including his brother Mike Seeger, Peter Yarrow, and Ralph Rinzler — to transform a nascent music festival in Newport, R.I., into a showcase for traditional sounds. Recalls Brown: “They had a meeting at Pete’s house and had several meetings with [festival producer] George Wein. They said they needed to use the popularity of commercial folk music to put young audiences in touch with the real music of America. So in conjunction with Peter, Paul and Mary and the Kingston Trio, you had the real blues singers, and real fiddle players from Appalachia and, later, from Cajun Country.”

It was following Dewey Balfa’s enthusiastic reception at the 1964 Newport Folk Festival that the Cajun fiddler became a cultural advocate and a crucial early figure in the Cajun renaissance. Brown calls Seeger the “front man” for such revivals. Seeger himself has a more organic description, calling himself a “planter of seeds.”

Today, the 88-year-old musician can’t sustain a note so long, but he still performs, visits classrooms and quietly keeps a regular roadside vigil against the Iraq war. In addition to Pete Seeger: The Power of Song, his legacy is being reconsidered in the new re-issue of David King Dunaway’s biography How Can I Keep From Singing: The Ballad of Peter Seeger (Random House), along with Bruce Springsteen’s recent “Seeger Sessions Band” recordings and performances, with covers of songs written or performed by Pete Seeger — a project likely inspired in part by Springsteen’s viewing of a rough cut of The Power of Song.

Why the sudden rediscovery of an octogenarian banjo-playing radical? The answer, Brown says, might be the times. “He’s an incredibly truthful voice. He also reminds us what being an American can really be about. And I think we’re all a little bit desperate for that right now.”