Jumper loves its teleporting twentysomethings but leaves script and artful acting far behind. 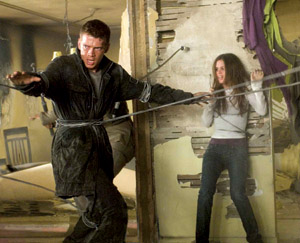 The movie Jumper has as much wasted potential as its super-powered protagonist. Both possess something valuable — the movie’s underlying idea, the main character’s overarching ability — but fritter it away in unexamined self-indulgence.

One snowy afternoon, Michigan high schooler David Rice (Max Thieriot) accidentally discovers that he can “jump,” or teleport, when he plunges into an icy river; trapped under the frozen surface one moment, David suddenly finds himself sopping wet and face down in the stacks of the Ann Arbor library. A few breathless jumping experiments later, and the unhappy kid takes the chance to remake his life, running away from hard-drinking father William (Michael Rooker), leaving behind childhood sweetheart Millie (Annasophia Robb) and growing into a pretty-boy thief (Hayden Christensen) absorbed with his own abilities and how much fun he can have with them.

In his New York City lap-of-luxury penthouse apartment (paid for by in-and-out bank jobs and pilfered poker chips), David kicks back and flicks through the channels on his flat screen, not even registering a news report of stranded flood victims and the reporter’s lament that rescuers may not be able to reach them in time. Gee, if only we knew someone who might jump in and save the day. But the possibility of using his power for the greater good never even punctures David’s bored passivity. Instead, he pops over to London to spend quality time atop Big Ben, then picks up a girl in a pub, leaving her place bright and early to chase down the perfect wave. Fiji, it is.

Consequence, however, is catching up with David. And it comes not in the expected form of law enforcement, but in the unexpected form of cosmic warfare. David’s not the only jumper, it seems, and jumpers have serious enemies: the Paladins, humans who have learned to use technology to track, trap and eliminate teleporters. The Paladins are led by Roland (Samuel L. Jackson), a white-haired zealot who speaks venomously and carries a rather large knife. God, he is fond of observing, is the only one who should have the power to be in all places at once. Roland and his minions have taken it upon themselves to right this genetic aberration, developing electric-shock weapons that tether the jumpers in place so that Roland can dispatch them.

David manages to slip Roland’s grasp in their initial encounter without fully understanding that he is now at war. Our oblivious hero still thinks he can surf time and space solo. And so he jumps home to Michigan to see Millie (Rachel Bilson), inviting her to Rome and unwittingly dragging her into his world. In the Eternal City, David meets fellow jumper Griffin (Jamie Bell), a hunted-turned-hunter, and it finally starts to sink in that this battle between jumpers and Paladins has been waged for centuries. He won’t be able to slip away forever. And yet, new to this whole war of two worlds, David commits a series of missteps that soon has Roland hot on the trail of all three of them.

Interesting idea notwithstanding, Jumper’s script is a mess. Four writers wrestled with the original book by Steven Gould, and still the movie feels like nothing more than the underdeveloped set-up for the inevitable sequels to come. Almost everything that matters story-wise is left unexplained or open-ended. Director Doug Liman (The Bourne Identity, Mr. and Mrs. Smith) obviously lavished time and attention on the special effects, which are seamlessly executed; David and Jamie have one long intercontinental disagreement that could have been the centerpiece of a snappy, creative action film had there been anything of substance wrapped around it. But apparently not even a three-too-many coterie of scribes could craft a compelling, involving storyline out of Jumper’s complicated mythologies. They just end up twisting events and dialogue around Liman’s computer-generated eye candy.

The shaky screenplay is further weakened by the movie’s casting. David isn’t written sympathetically, which is a shame because an unwilling warrior forced into fighting for a cause can be such a classic cinematic archetype, full of vinegar and inner conflict. But as user-unfriendly as David is on paper, he gets worse with Christensen’s one-note performance. It was easy to blame George Lucas for Christensen’s Star Wars shortcomings, but the brutal truth is that the kid just can’t act. He’s matched in his clumsy characterization by the perkily awful Bilson (The O.C.). Until they grow into interesting actors (and that’s giving them quite the benefit of the doubt), these two belong in a music video or a fashion spread, not at the heart of a proposed sci-fi trilogy.

Bell (The Chumscrubber, King Kong) is the cast’s lone stand-out. His wary and world-weary Griffin is effortlessly interesting, quietly overpowering Christensen at every turn. It’s hard not to wish he had somehow taken over the movie, jumping into the lead role and carrying the audience right along with him.