The Iberia Parish Coroner responded Monday to the attention surrounding the questionable shooting of Victor White III, a black man from New Iberia who died April 2 while in the custody of local law enforcement. 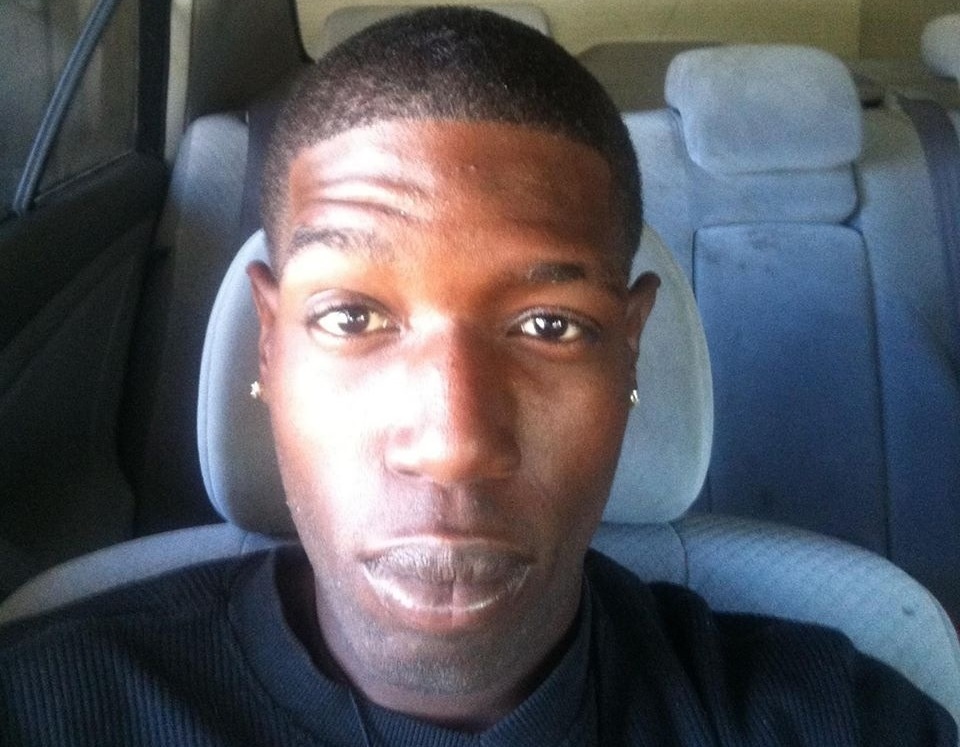 The Iberia Parish Coroner responded Monday to the attention surrounding the questionable shooting of Victor White III, a black man from New Iberia who died April 2 while in the custody of local law enforcement.

White's case has recently experienced a renewed surge of attention in the wake of the protests sparked by the police killing of a black teen in Ferguson, Missourri.

Monday's statement from the parish coroner, Dr. Carl Ditch, comes after the partial release of White's autopsy last week and his determination of suicide as the 22-year-old's official manner of death. Although Ditch only released one page of White's autopsy, the information included on that page was enough to immediately resurrect questions and public scrutiny over the circumstances surrounding the night of April 2.

Responding to what could easily become an ugly issue for the parish, particularly the sheriff's office, Ditch addresses the renewed focus on the case, saying Monday's press release has now become a necessity. 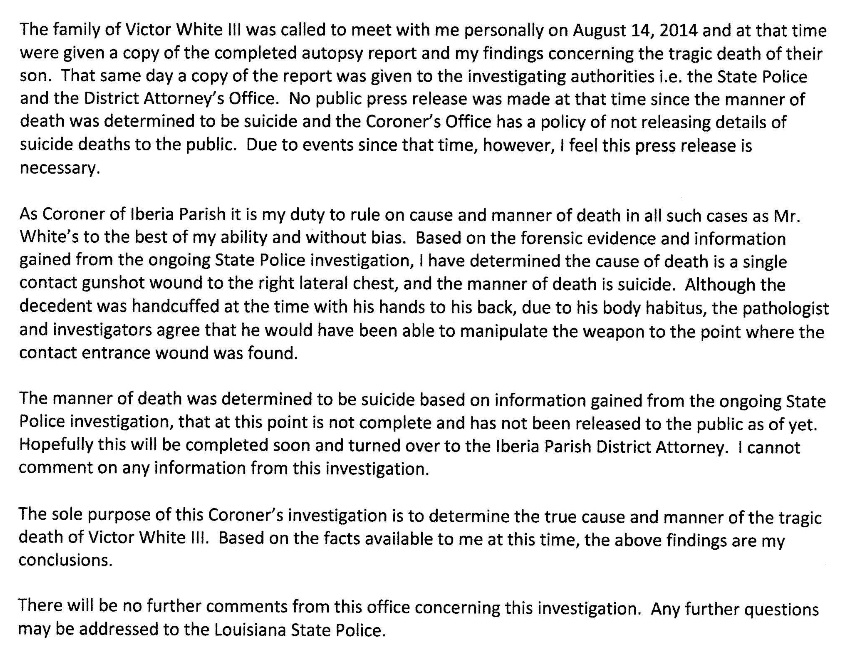 The only account from the sheriff's office of what happened to Victor White III while in its parking lot inside the back of a cruiser on the night of April 2 came from a press release issued by State Police, which immediately stepped in for an investigation as is customary for all in-custody deaths. 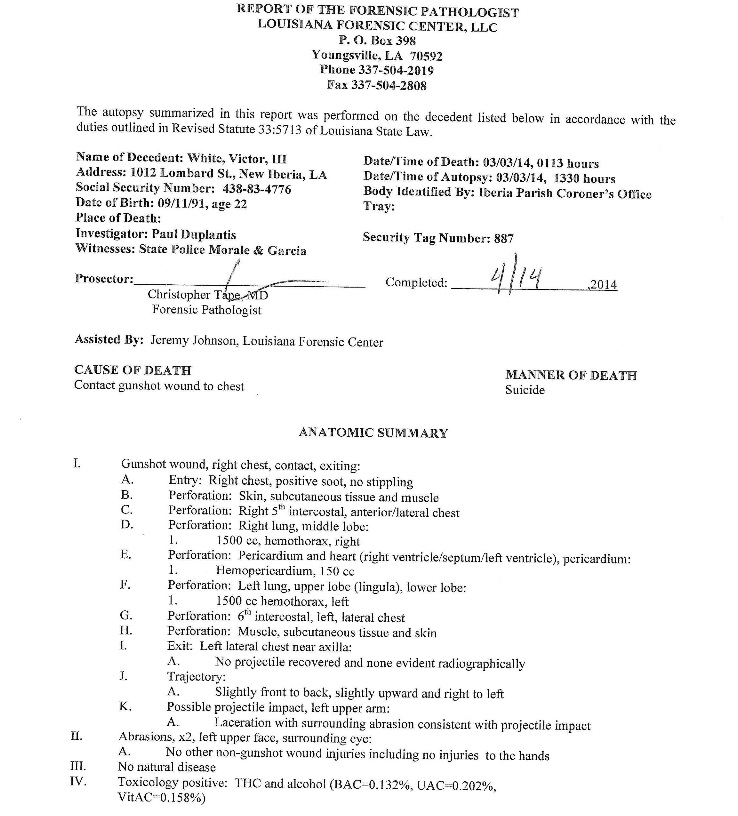 As reported to state police investigators by the deputies involved, White was arrested in connection to a Sunday night fight reported in the parking lot of a convenience store near his home. White was arrested, likely the result of being frisked by a deputy due to their alleged discovery of illegal narcotics. Charged with possession, White was cuffed, behind his back, according to the account from deputies. White went into the backseat of a cruiser and was then taken in for processing. Upon arrival at the sheriff's office, White is said to have become hostile, refusing to exit the vehicle, claims the arresting deputy, whose name has been shielded from the public.

In the account given to state police investigators, the deputy says he then went for help, but returned to find White holding a gun of mysterious origin, a gun that he was somehow able to produce from somewhere either hidden on his body or from within the backseat of the cruiser. White's feat, deputies told state police, was all accomplished with the limited use of his hands, which not only were in cuffs, but were also restrained behind his back. The story given by deputies ends with White pulling the trigger and firing a round into his back, killing himself in the process. Initially, the sheriff's office listed White's manner of death as accidental.

While the coroner differed on White's manner of death, ruling it a suicide, his report also reveals other differences from the account given by deputies, including the direction that the gun was aimed, and what originally was cited as a shot fired into White's back was changed to a shot entering the front of his body, on the right side of his chest.

The report states no projectile was discovered, yet, the bullet isn't the important part missing from the story, it's the gun from which it was fired, and where that gun came from. Was it police-issue, but somehow taken by White without the deputy' knowing? Or, did the deputy who obviously frisked White - we're basing this on the notion that he was charged with drug possession, indicating drugs were located somewhere on his person - somehow overlook a gun in the process of his pat-down?

The origin of the gun is important, and raises what's possibly the most important of the unanswered questions surrounding this case: Was the gun White's or was it the deputy's?

That's now resting on the shoulders of state police investigators, and while it's likely they already know the answer to the question of the gun's origin, it's unclear when or if they'll ever say. All we know so far is that it's an ongoing process.

For the latest in our ongoing coverage of this story, click here.