The attention surrounding Victor White III has spiked with the release of last week's autopsy report, which has raised a number of serious questions about the night of his death and has put the Iberia Parish Sheriff's Office under an increased wave of scrutiny as more national media outlets are jumping on the story, most recently seen on MSNBC's The Rachel Maddow Show.

The attention surrounding Victor White III has spiked with the release of last week's autopsy report, which has raised a number of serious questions about the night of his death and has put the Iberia Parish Sheriff's Office under an increased wave of scrutiny as more national media outlets are jumping on the story, most recently seen on MSNBC's The Rachel Maddow Show. 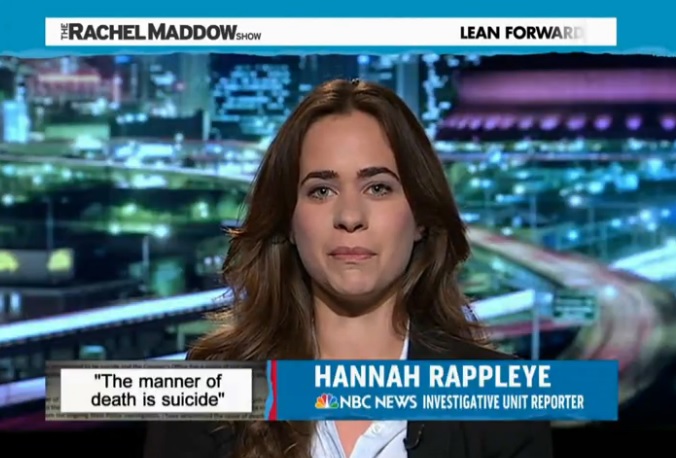 From the start, White's death in the back of an Iberia Parish Sheriff's cruiser on the night of April 2 was big news, but, like all big stories, it didn't take long for the attention to fade.

Then came Ferguson, Mo., and with the death of a young black killed at the hands of a policeman, unrest ensued, and it wouldn't be long before the story of Victor White III would return to the spotlight. And all it would take would be the release of White's autopsy last week.

On Wednesday, the story hit The Rachel Maddow Show and featured a discussion with Hannah Rappleye, an NBC News Investigative Unit reporter, over several big discrepancies between the coroner's report and the account originally given by the sheriff's deputies on-scene the night of White's death.

Rappleye says her interview requests with Iberia Parish Coroner Dr. Carl Ditch were denied. His autopsy, however, says a lot, as does the information she received by talking with White's family and friends, including several who were with him on the night he died.

"One thing that particularly struck me about the report is that the coroner noted Victor White had lacerations on one side of his, but the Iberia Parish Sheriff's Office had told me he had not been in an altercation with police that night," Rappleye told Maddow, adding that she also spoke to one of White's friends who says he was with White at the time of his arrest and there wasn't a scratch on his face as deputies took him away.

"The coroner also noted that investigators told him that Victor White said I'm gone' before the officers heard the gunshot, which indicated it was a self-inflicted wound, that it was a suicide to him [the coroner]," said Rappleye.

For unknown reasons, the autopsy didn't include a gunpowder residue test of White's hands, which could have helped in determining who fired the fatal shot. The autopsy, however, did show gunpowder residue on the entrance wound located on White's upper right chest.

Even more questions are raised by the location of White's wound, as arresting deputies claimed he was handcuffed behind his back. The arresting deputies also originally claimed that White shot himself in the back, accidentally. The coroner, on the other hand, ruled White's death a suicide. The coroner also addresses the issue of White having his hands restrained behind his back, but still being able to shoot himself in the upper right area of his chest.

According to the coroner, White was by all means capable of pulling off such a flexible stunt, crediting it to what he calls White's "body habitus."

The coroner's meaning? According to Rappleye, that's up for interpretation due to the coroner not talking. White's family, however, is, and in an interview with Rappleye, here's what White's father, Victor White had to say:

You can't make me understand how my son took his left hand, when he was handcuffed behind the back, and shot himself. I don't believe a thing they're saying at this point. The only thing we want back is our son.

Check out the full MSNBC segment below, and click here to read more from our coverage of this story.