A replacement is expected by January to fill the vacancy left when Greg Roberts resigned after allegedly pointing a fake gun at an engineer during a June meeting.

A nationwide search is under way to replace Lafayette Regional Airport Director Greg Roberts following his resignation over an incident in which he allegedly pointed a fake gun at an engineer during a meeting in June. 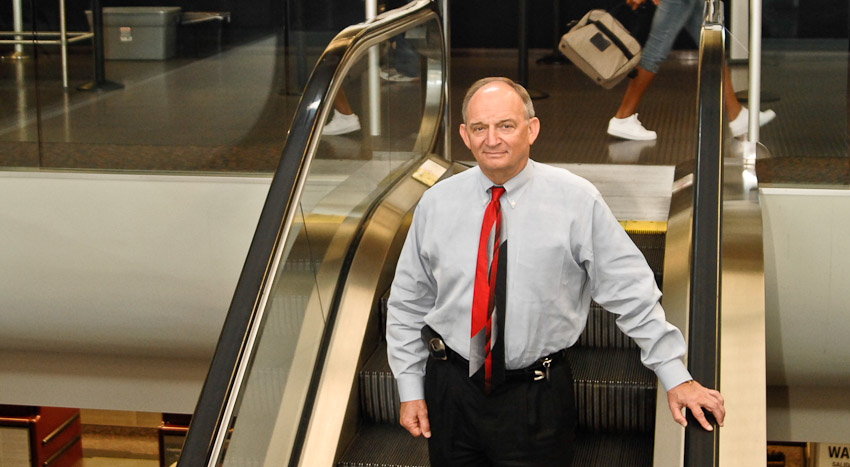 The incident, first reported here by The IND, occurred June 11 during a meeting in Roberts' office with engineers from Domingue, Szabo & Associates, the firm hired for the new Bell Helicopter facility at the airport. According to a report from the Lafayette Parish Sheriff's Office, a dispute ensued over who was responsible for the costs of an environmental impact study, prompting Roberts to grab a fake gun from his desk and point it in the direction of the engineering firm's president and CEO George Glaubrecht, saying "notice my finger was not on the trigger."

No one in the meeting knew the gun was actually a mock pistol used as a TSA training device. The incident prompted Roberts' retirement several days later, and an investigation by the sheriff's office soon followed. By the time the case was turned over to District Attorney Mike Harson's office, Glaubrecht had decided against pressing charges.

Now, the airport is looking to fill the vacancy left by Roberts, who led the airport for the last 21 years.

According to this report from The Advocate, a nationwide search was launched Aug. 15, and applications will be accepted through Sept. 26.

"We have already received applications from all over the country," Airport Commission Chairman Matt Cruse tells the Advocate.

Fifteen candidates have stepped forward so far, including five from Louisiana and 10 from other states, and the names will be handed over after the Sept. 26 deadline to a search committee made up of Commissioners Paul Guilbeau, Valerie Garrett and Tim Skinner, as well as Lafayette City-Parish Councilman Kenneth Boudreaux and Stone Energy President and CEO David Welch.

The committee will whittle down the list to a group of top prospects, and will then travel to the communities of the applicants for a first-round interview. The next step, according to Larry Sides of Sides & Associates, the airport's PR firm, will bring the top applicants to Lafayette for a second interview. The list will be whittled down more, and the remaining top applicants will then be forwarded to the Airport Commission for one last round of interviews before a final decision is made.

The position will carry a salary of between $100,000 and $150,000, and the only requirement for the job is a four-year college degree and some experience in leadership, though the desired applicants would also have 10 years experience in senior airport management, accreditation from the American Association of Airport Executives  and a degree in either business management, aviation management or engineering.

A final selection is expected by January.