An attorney signs up to run against LPSB's Mark Cockerham, and within a week a lawsuit is filed by a former LPSS employee in an attempt to disqualify him. Coincidence? 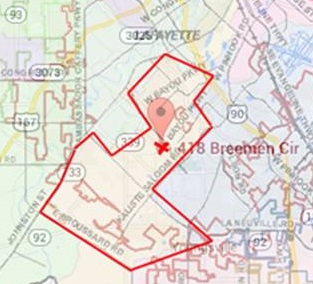 Zooming in on the current political district map for Lafayette Parish clearly shows LPSB's Mark Cockerham still resides within the boundaries of his District 7 seat. Combined above are a Google map for 418 Breemen (the red x) superimposed over a council district map found at LCG's website. District 7 is rougly outlined in red.

A local attorney steps forward on the first day of qualifying to run against Lafayette Parish School Board member Mark Cockerham, and within a week a lawsuit is filed, not by an attorney, but by a former school system employee claiming, inaccurately, that Cockerham no longer resides in the district he was elected to represent.

The suit was filed late Friday in the 15th Judicial District by Nancy Cech, who claims she's a District 7 resident. Cech is a former school system administrator who worked under former Superintendent Burnell Lemoine, and from the looks of it, has issues with his replacement, Pat Cooper, as well as his supporters on the board.

Cech alleges that the address Cockerham used in qualifying for re-election is not in District 7. The problem with that allegation is that it's flat-out wrong.

Instead of using an up-to-date map of Lafayette Parish's political districts, Cech bases her allegation on a 2002 map that was made obsolete shortly after the 2010 census.

Cockerham doesn't deny that he changed residencies during his term, but 418 Breeman Circle, the addressed he listed recently on qualifying papers, is without question inside the boundaries of District 7.

What's even crazier about Cech's suit is that based on the new district maps, she's the one who no longer lives in District 7, as a slight shift in the 2010 redistricting turned her into a resident of District 8, which means she'll be voting on the heated contest between board president Hunter Beasley and challenger Erick Knezek come Nov. 4.

(The Greater Lafayette Chamber of Commerce has a handy tool on its website - the Advocacy Action Center - that allows users to enter address and zip code to find out who their elected officials are. Cockerham's address, 418 Breemen Circle, shows he lives in District 7. Cech's address, based on her lawsuit, shows she resides in District 8.)

So, if the race between the incumbent Cockerham and attorney (hint-hint, wink-wink) Dawn Morris has nothing to do with how Cech will be voting in November, what's her motive for filing suit? Is it plausible that she really was unaware of the map change, and filed an ill-researched lawsuit? Or did someone put her up to filing an intentionally inaccurate lawsuit in an effort to focus negative attention on Cockerham? Perhaps an attorney with a vested interest in the outcome of the District 7 election?

That all remains to be seen, as Cech filed the suit in proper person, meaning she filed it as a non-attorney. But from the looks of her petition, we're betting she had a little help, probably from an unknown lawyer who for some reason didn't want his/her name attached to the document.

These answers may be forthcoming: A response was filed in district court Tuesday on Cockerham's behalf by attorney Gary McGoffin - who's also legal counsel for The IND - denying Cech's claims and calling for an opportunity to determine "the underlying methods and motives for [her] petition," which means she could be deposed and required to testify under oath.