The art and craft of Paul Hebert 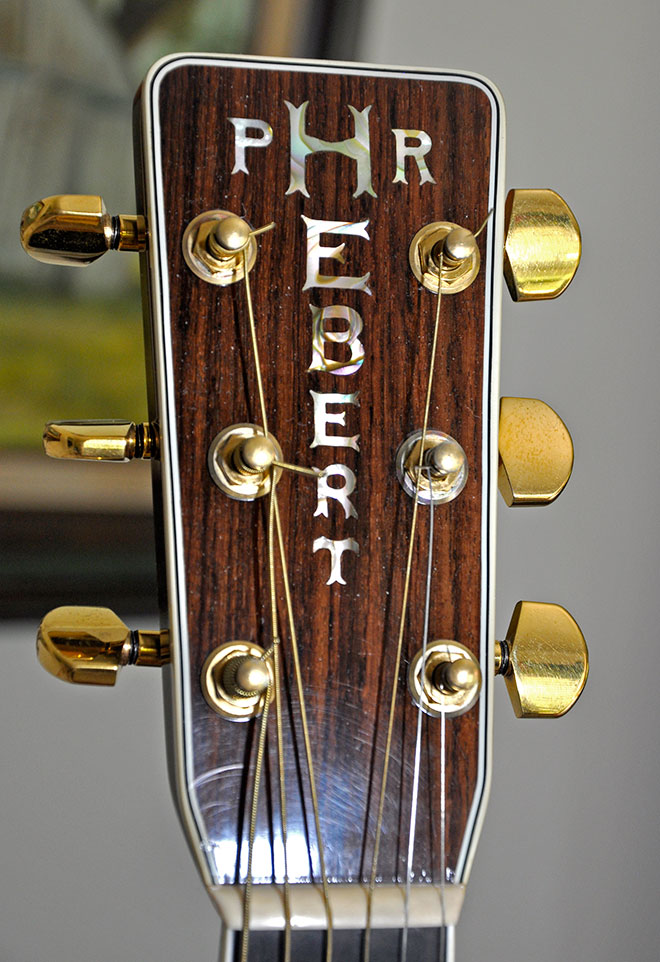 "Martin guitars are perfect," 84-year-old Paul Hebert says slyly, "but mine are more perfect - as perfect as these little hands can make them."

Since 1980 Paul has meticulously constructed 17 Martin-style and -quality guitars in a small workspace at his home. Entirely by hand. No power tools. (See a photo gallery below this story.) Through a craft he calls "just a hobby," Paul uses the finest woods and methods honed over decades to create one-of-a kind masterpieces. He applies a lifelong perfectionism to a hobby that began when his son challenged him to make a guitar. 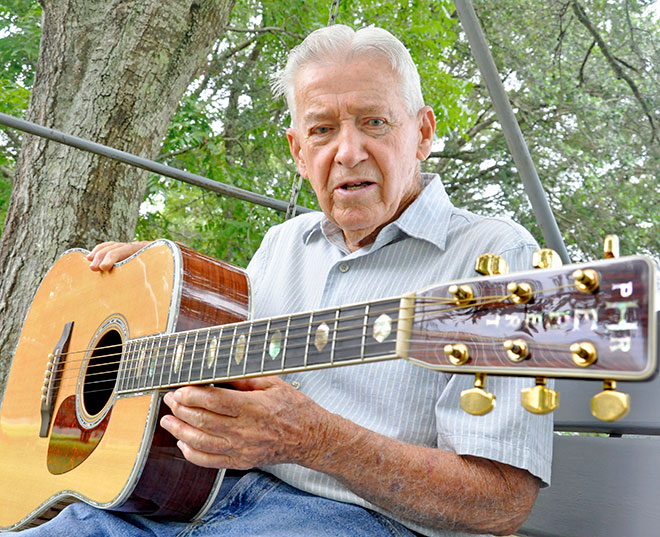 "I saw the incredible capacity he had for detail. I wanted to repay him for all the sacrifices he made for us," son Allen Hebert says of his dad, who by 1980 had developed a local reputation as an expert at repairing stringed instruments. So Allen contacted C.F. Martin & Co. in Pennsylvania and they put together a set of supplies and raw wood. Allen presented the gift to his father, challenging him to make a guitar. Father and son even took a trip to Pennsylvania to tour the factory and learn how the guitars are made. Seventeen guitars later, Hebert believes his instruments stand up to the best of Martin's.

"I've always been a fixer and a maker," Paul notes, citing a necessity growing up during the Great Depression. A natural patience and attention to detail made him a great craftsman. Those skills led him to draftsmanship and engineering and, after serving in the Korean War, Paul landed a job with the city of Lafayette, then seven square miles in area, where he worked from 1958 to 1992.

"My father couldn't carry a tune in a bucket," Paul recalls of his early years. But the family gathered around the radio on Saturday nights to hear Ernest Tubb, Roy Acuff, Carl Smith and Hank Snow on the Grand Ole Opry. Paul sang those songs everywhere he went. "The urge started to come on when I was about 15," he says. That urge to play and sing led him to sell a calf for $25 and buy a Montgomery Ward guitar for $24.95.

His Montgomery Ward guitar came with a music book, but Hebert didn't read music, so his dad took him over to the oil-loading dock to meet Joey Leblanc. "T-boy, watchu got there?" Leblanc asked him. He picked up Hebert's guitar and began playing. "I'm gonna show you how to make some chords and how to keep time," Leblanc promised.

Once he got pretty good at it, Paul was invited to sing in the mornings on KANE radio in New Iberia. He picked up some fans who called him the Teche Troubadour and sent him hundreds of cards and letters. One of those fans was Nita Adams. When she heard Paul Hebert was going to be playing with B. Romero and the Teche Playboys one Saturday night at Palumbo's near Abbeville, she made sure to go and see what this Teche Troubadour looked like. 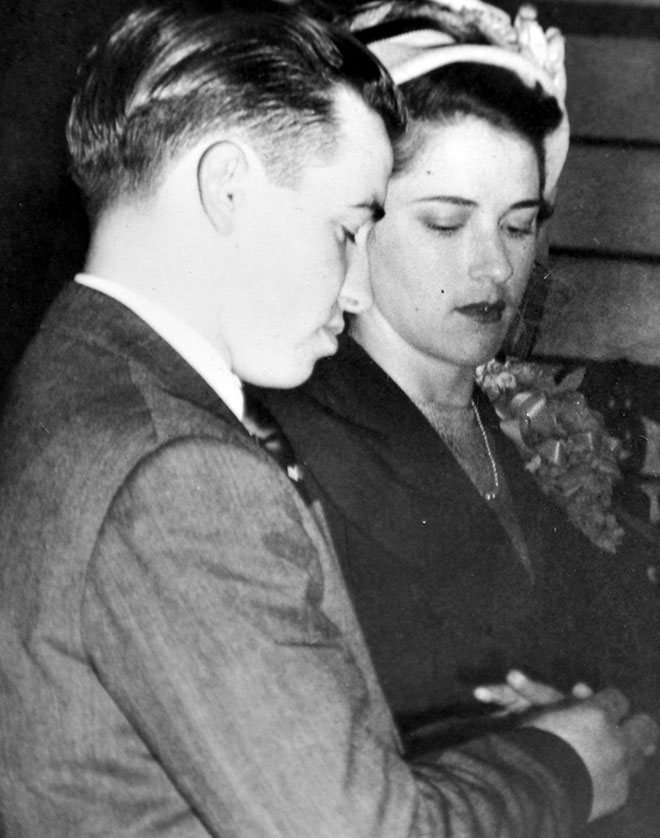 Paul remembers the moment he laid eyes on her: "In walked this gorgeous girl wearing black and smiling. I saw her and said, Oh God! Who is that?'" He inquired about her to a friend, and the next Saturday Nita returned and walked right up to him. Sixty-three years later, you can still the see spark between them.

Hebert had a close call with a record deal once, but by the late 1950s, his family was growing fast and a life in music didn't harmonize with raising a family. Instead, music became a part of family life. He eventually acquired a Martin guitar, his ideal, after insisting that Harold Romero of Romero Music get the Martin franchise. His children played and harmonized with him, and the Heberts became something of a South Louisiana Von Trapp family. Allen remembers his father standing against a certain part of a paneled wall in the house to get the best sound when he played. They went to festivals in Mississippi, the Carolinas, Georgia and Oklahoma with a family friend who introduced Hebert to bluegrass music. Each of the eight children went on to become musicians in one way or another; some composed, others played professionally and some just for fun, like their father.

The person most proud of his work is his quality control manager. "No two are alike," Nita Hebert says proudly. Paul calls her an essential part of the process. "If I did something that wasn't down to the hundredth degree, she'd say, You're not going to leave it like that?' So, I'd do it over. See those hawks flying over? Her eyes are just like that."

Allen remembers his dad setting up two sawhorses on a piece of carpet in the driveway as he worked on a guitar. "People would stop and ask what he was doing. He made a lot of friends that way."

The key to the tonal quality, Paul explains, is the wood, the cleanliness inside and out, and the precise spacing of the pieces. He uses Adirondack red spruce for the fronts and mahogany, Indian or Madagascar rosewoods for the backs and sides. For the finishing, he watches the muggy, South Louisiana weather, waiting for dry days to stain. Keeping a log of his hours, Hebert has spent a minimum of 275 hours and a maximum of about 450 on one guitar. The lettering alone can take over 18 hours as he slowly hand cuts the abalone, then routers out a thin negative space in the veneer to drop the letters into. 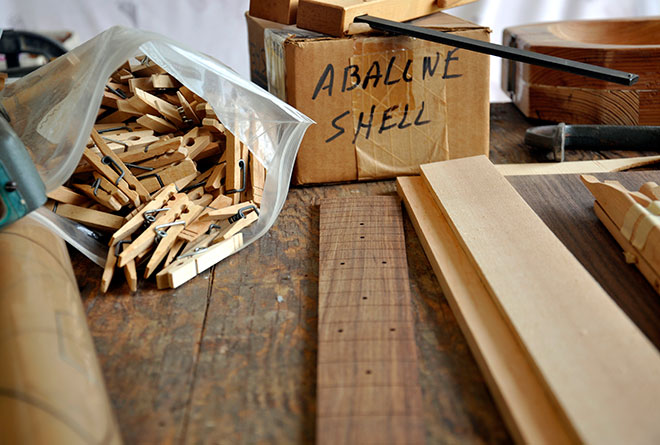 He knows each guitar by it's creation order. No. 1 took him nine months to make, allowing him to hone his method and create his own tools and molds for the tasks. Everything is hand cut and methodically pieced together with a ritual-like process.

The Heberts usually take at least one guitar with them to festivals where they've befriended many bluegrass and country musicians who've played some of the guitars. "When Jimmy C. Newman played one he said, Boy, that thing is true,'" Paul remembers.

There are only two people outside of the Hebert family who own one of Paul's 17 masterpieces. No. 1 is promised to Allen, but his dad is hanging on to it for now. It's special to Hebert - the first one, and the most ornate. "I didn't know how to make them, so I put everything into it," he confesses.

Paul continues to repair instruments, including his own creations. He calls it warranty work. He just fixed a neck injury in No. 11 for his grandson. But it's unlikely that there will be a No. 18. At 84, with one major heart attack under his belt, he and Nita are worried about leaving an unfinished guitar, an unthinkable idea to Paul.

For now, it's just the 17. In the hands of his children and grandchildren, they exist as evidence of a life of music and craftsmanship, creations of the Teche Troubadour, a man of gracious kindness, tenacious spirit and a giving heart.

Paul often gets earnest offers to buy one of his guitars or to custom-build one. His answer is always the same, "That's out of the question," he says. "I build it like I want and I give it away free."