Thanks to strong recruiting, the 2014 gridiron squad can reload rather than rebuild, but the urgency to surpass past success is real.

Thanks to strong recruiting, the 2014 gridiron squad can reload rather than rebuild, but the urgency to surpass past success is real. By John Mikell 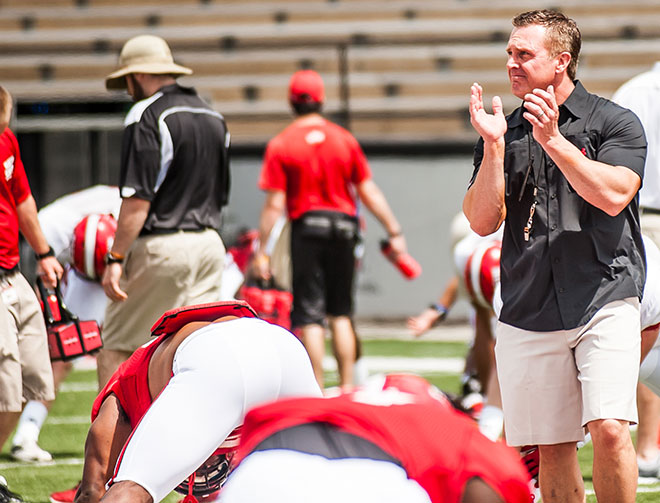 When Mark Hudspeth became UL's 26th head football coach in December 2010, the university had won as many as nine games only three times in 109 years. The most recent nine-win season was 1976, but two of those games were later forfeited for using ineligible players. In 1970 the 9-3 USL Ragin' Cajuns were Gulf States Conference Champions and made their then-most recent bowl appearance - a 26-25 loss to Tennessee State - in the short-lived Grantland Rice Bowl in Baton Rouge. The first nine-win team was in 1921. One of SLI's road wins that year was a 40-21 shellacking of St. Charles College in Grand Coteau - a Roman Catholic seminary.

Hudspeth's first three teams won three bowl games and UL's first bowl victories since the 1944 Oil Bowl. Each year they reached nine wins without using illegal players or taking a road trip to Grand Coteau.
So who could possibly be disappointed if the 2014 Cajuns went 9-4 again and spent the weekend before Christmas back in the Big Easy? Mark Hudspeth for one. The Cajun football team for another. Maybe even some portion of Cajun Nation fresh from what Athletic Director Scott Farmer called "a magical year" for UL athletics in 2013-14.

Season ticket sales broke last year's record, and a month before the opener totaled 12,276, just 5,000 less than the season attendance average in 2010 BH (Before Hud). Farmer's goal is 30,000 a game. It could happen. Big draws Southern and Louisiana Tech open the schedule, and Sun Belt challengers Arkansas State and South Alabama both visit Lafayette. Six thousand seats, 16 concession stands and 80 toilets have been added to Cajun Field (6,000/16/80: interesting ratios calculated by an unnamed engineer). Investments have been made. Expectations are high.

Hudspeth and his players have their own expectations and the added incentive of opportunities missed. Last year, as good as it was, could have been great. Losses to Arkansas, whose only wins last year were over the Cajuns, Samford, and 1-11 Southern Mississippi, and to 7-5 Kansas State false-started the season. A two-game losing streak to finish the regular season cost the Cajuns sole possession of the Sun Belt Championship.

Suddenly revitalized programs like UL's rarely get second chances. They make their run, get their big season, then graduations and lack of depth force them to rebuild, sometimes over several years. Only established programs reload, usually with highly rated recruiting classes, rather than rebuild. 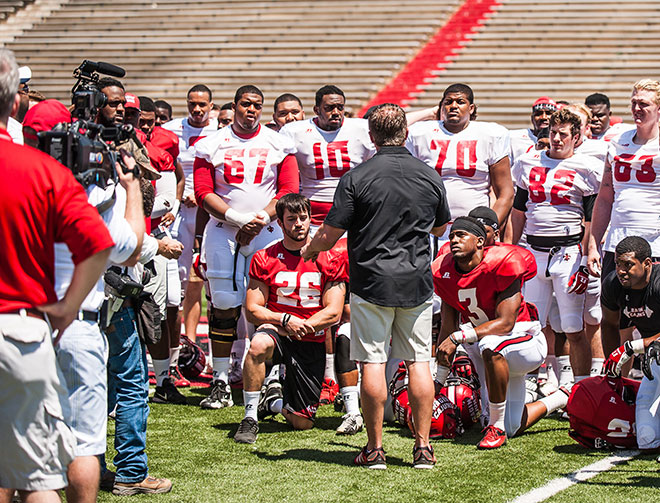 But the 2014 Cajuns get a second chance and it's because of the best recruiting class in school history - Hudspeth's first, the class of 2011. After three years they have already won more games - 27 - than any other class won in four. The class is led by quarterback Terrance Broadway, who is 1,000 yards short of reaching No. 2 on the UL all-time passing list; and with another season like either of the past two the senior from Baton Rouge will be the all-time total offense leader. A classmate, Alonzo Harris, is 800 yards short of Brian Mitchell, No. 2 rusher in Cajun history. And if wideout Jamal Robinson equals last year's receiving totals he will end up the third leading receiver in Cajun history. Meanwhile the Cajun defense is led by Sean Thomas, Dominique Tovell, Christian Ringo and Justin Hamilton. All signed with UL in 2011.

The class of 2011 is deep as well. Seventeen of the original signees remain on the team, not counting Harry Peoples and Jemarious Moten, who completed their eligibility. On the preseason depth chart 13 of the class of 2011 are listed as starters. Add three recruits from Rickey Bustle's last class (James Butler, Daniel Quave and Trevance Patt) who are also listed as starters, and there's an urgency of now. This is not just the year; it has to be the year.

Hudspeth feels the urgency, too. Four years into a rebuilding program that is three years ahead of schedule, he has used whatever free time he's gained to dream big. Namely, a first-ever finish in the Top 25. September's games will determine if his dream comes true. Ole Miss and Boise State are both tougher than Arkansas and Kansas State were. Ole Miss is the best team UL has faced since No. 7 Florida in 2012, another hard-to-forget missed opportunity. Boise State is not as strong as years past but is 61-3 at home over the last 10 years. The Broncos have not lost a non-conference home game since 2001. Cajun fans can contrast and compare when the Rebels and Broncos play in Atlanta Aug. 28.

If things don't work out in Oxford or Boise, the Cajuns still have a good chance to finish the regular season with 10 wins because the Sun Belt is in a major rebuilding mode. Not only are four of the top six quarterbacks in the conference gone but so is Western Kentucky. Two FCS schools join the conference, and the Cajuns close their home schedule with one, Appalachian State. Consecutive Tuesday games in October (the second in Lafayette) and consecutive road games against New Mexico State and ULM in November are the only possible grounds for complaint. Arkansas State and South Alabama both visit Lafayette.

Visitor wins should be rare at Cajun Field in 2014 as Hudspeth's 14-2 home record suggests. Cajun fans hope a new contract making him the highest paid coach in the Sun Belt encourages Hudspeth to feel even more at home in Lafayette. With eight wins in 2014 Hudspeth passes Clement J. McNaspy and moves into fifth place for victories among UL football coaches. McNaspy had a stadium named after him. Coach Hudspeth will have to settle for a million a year, for now.