For years Ragin' Cajuns athletics have fought above their weight class; the dividends in wins - and attendance and fundraising - are tangible.

For years Ragin' Cajuns athletics have fought above their weight class; the dividends in wins - and attendance and fundraising - are tangible. By John Mikell

You don't have to see the world through vermilion-colored glasses to be impressed by Louisiana's Ragin' Cajuns over the past year. Five Sun Belt Conference championships in football, men's basketball, baseball, softball and men's tennis were followed by another New Orleans Bowl win, a dance at March Madness and a trip to the College Softball World Series. The year's highlight was provided by a Cajun baseball team that recorded a first for UL in any sport: a No. 1 national ranking.

Last year also produced tangibles the Cajun Nation can touch and even sit on. Cajun Field was expanded by 7,000 seats (to 38,000) and a new athletic training facility is under construction - the first projects of an ambitious $115 million Athletics Facilities Master Plan. All indications are UL has entered the sports entertainment business to stay.

The local money counters couldn't be happier. The Lafayette Economic Development Authority released a study estimating the 2013 local economic impact of UL's football program at $27.3 million, or $5.46 million for each home game. When the Facilities Master Plan expands Cajun Field to 60,000, LEDA estimates the economic impact to grow to $47.5 million a year. And it's not just football. The baseball and softball regionals/super regionals hosted by the Cajuns over four consecutive weekends this spring added another million dollars to the area economy.

There's another reason to be impressed: Last year's success on the field, which resonated through the local economy, was accomplished with an athletic budget totaling a relatively meager $19 million. In 2012-13 when UL's Athletic Department worked with a little over $17 million it was well behind Western Kentucky, Texas State, Georgia State and New Mexico State, who each budgeted at least $25 million for athletics. Even Appalachian State spent $21 million preparing to join the Sun Belt. UL's athletic budget for that year was almost exactly the Sun Belt Conference average.

Any future growth in athletic expenditures will depend on increased ticket sales and donor support. UL has reason to be optimistic on both fronts. Football season ticket sales reached a record 12,276 three weeks before the first game against Southern. The game against the Jaguars and one a week later against ancient rival Louisiana Tech are both expected to fill all the new seats (this paper went to press a day before Southern game). If that happens, reaching Athletic Director Scott Farmer's goal of 30,000 per game for the season would seem a cinch. The record average is 29,171 set in 2011 thanks to the 41,357 who showed for the season opener against Southern. Meanwhile the Ragin' Cajuns Athletic Foundation has been busy. On Aug. 3 the university announced that a record $1.76 million in unrestricted donations had come in, surpassing last year's $1.67 million. Then, on Aug. 26, came bigger news: the RCAF Annual Fund had eclipsed the $2 million mark for the first time. The money raised is donated to UL athletics for budget assistance, endowments, capital improvements and the recruitment and retention of quality coaches. Cajun fans are far more interested in retention than recruitment. 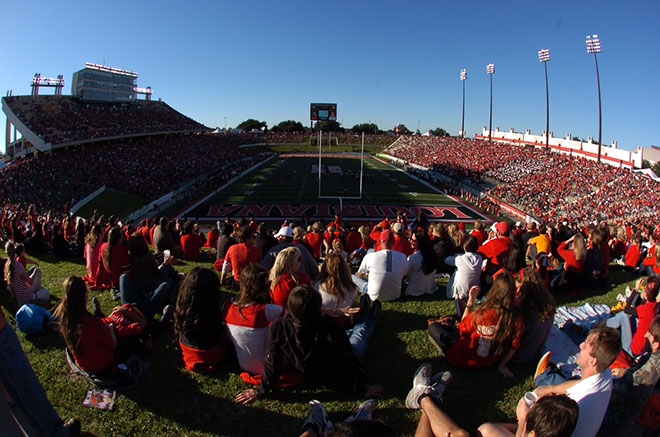 Winning drives ticket sales and donor contributions, and nothing affects winning percentages more than coaching. If this is a great time to be a Cajun fan it's because UL has its best coaching lineup ever. Tony Robichaux and Michael Lotief are not only Lafayette institutions, but they are also widely respected among baseball and softball circles across the country. Fans know when they're lucky and show their appreciation by jamming Tigue Moore Field and Lamson Park. Basketball coach Bob Marlin's steady hand has finally redirected a historic program that once was the university's most prominent. Last year's run to the NCAA and his best recruiting class should make the Cajundome the place to be this winter.

But this is football country. When the football team wins, the sun shines and anything is possible. Football coach Mark Hudspeth has led the Cajuns to an unprecedented level of success: three 9-win seasons and three bowl wins. In his three years, Cajun Field attendance ranked first, second and fifth, respectively, on the all-time list. UL President Dr. Joseph Savoie and AD Farmer acknowledged Hudspeth's value to the university by finalizing a contract over the summer that made him the highest paid coach in the Sun Belt. The six-year $6.45 million contract has a significant $1.25 million buyout clause if Hudspeth leaves after this year. The clause is intended to ensure any coach-poaching school interested in Hudspeth would be truly desperate if they tried to lure him away. (Cincinnati swallowed a $1 million buy-out to hire Tommy Tuberville from Texas Tech, but that was considered more bad judgment than desperation).

But Hudspeth could find the offer to coach in the SEC or Big 12 too much to resist, especially after a season with 10 or 11 wins. If he does leave, his legacy would include a program in far better shape than he found it, resurgent fan support and an athletic department with considerable momentum. His success would have made the UL job far more attractive to prospective replacements. Hudspeth has created a template for any future UL football coach: an outgoing personality, a good recruiter and either head coaching experience or the contacts needed to build a stable, competent staff.

The Cajun Nation wonders why any coach would consider leaving Lafayette, but the realities of college sports, namely the overriding advantages over everyone else of the biggest, wealthiest athletic programs, can't be ignored. In August those realities were manifested in the "autonomy" granted the Power Five conferences to set their own rules covering compensation for the full cost of school, health insurance, contact with agents and special financial assistance for their "student athletes." In all, 11 areas were specified where the Power Five could adjust current NCAA restrictions. Crucially, the number of scholarships allowed and transfer rules remain unchanged. Autonomy officially acknowledged the vast differences in resources between the richest and the rest in effect since football programs in NCAA Division 1 were subdivided into 1-A, 1-AA, and 1-AAA in 1978.

Because USL, as it was known then, had a 30,000 seat stadium and averaged 15,000 per game, it qualified for 1-A, later renamed the Football Bowl Subdivision (FBS). The Cajuns have been punching above their weight class ever since. The Power Five hopes autonomy will be an adequate response to a number of potentially expensive lawsuits and to accusations of athlete exploitation while preserving their economic and competitive advantages. They like the status quo.

As status quos go, under the current one Louisiana's Ragin' Cajuns will continue to do quite well. Why? Think back to last spring when the Cajun softball team beat the richest college athletic program in the country, the Texas Longhorns, and the following week the eight-time national champion Arizona Wildcats to get to the College Softball World Series. If you were there you remember how sweet it was. If you weren't, be in the stands next time. It's going to happen again.