Even casual football fans know Louisiana produces some of the best high school football players in the country, but last year was ridiculous.

Even casual football fans know Louisiana produces some of the best high school football players in the country, but last year was ridiculous. According to various recruiting websites, Louisiana had the nation's No. 1 prospect for each of the following positions: wide receiver, offensive tackle, offensive guard, all-purpose athlete and running back. And the latter, St. Augustine's Leonard Fournette, was the No. 1 college recruit in the country. Before dismissing such rankings as hopelessly subjective, talk to someone who witnessed the 2012 regional playoff game between St. Augustine and St. Thomas More. The Purple Knights won 40-14 thanks to Fournette's 354 yards on 28 carries.

Instant legend performances are thrilling but too rare to explain the continuing popularity of Louisiana high school football. Week after week during what passes for fall thousands seek the glow of stadium lights in towns like Delcambre or Eunice, or find familiar seats in the stands at Acadiana or Carencro, to observe the local rituals of their favorite team. Bands, cheerleaders, former players, parents, neighbors and students all have roles to play. Each has a connection to the players on the field. Whether the affiliation is friendship, family, tradition or a quarterback-cheerleader romance, it's strong enough for even the casual visitor to feel. The connection between spectators and players elevates high school football above the entitlements of the college game and the corporate culture of the NFL.

Here's a sampling of September games. Try a few and catch the feeling.

Sept. 5: University High (BR) at Teurlings. The Cubs feature LSU commitments Nick Brossette (running back) and sophomore linebacker Dylan Moses (6'2", 220). Will Les Miles break curfew the night before the Sam Houston State game to watch son Manny play QB? U High trounced the Rebels last year on its way to the Superdome where it lost to John Curtis. Expect a packed house and some trickery from Teurlings. 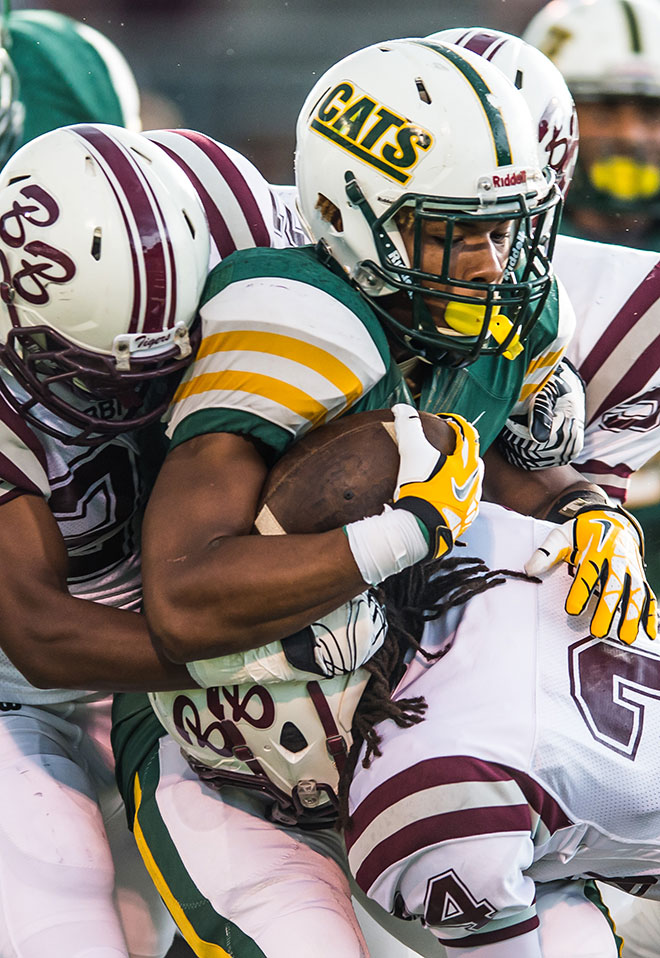 Sept.11/12: If you are leaving Friday for UL/Ole Miss in Oxford, choose between one of two Thursday games at classic stadiums, Gardner Memorial in Crowley or Donald Gardner in Opelousas. For a physical battle check out Breaux Bridge-Notre Dame. If you enjoyed Southern's band at Cajun Field don't miss the Opelousas Human Amplifier Marching Band, not surprisingly one of The Human Jukebox's feeder programs. The Tigers will face the Lafayette High Mighty Lions with kicker Steven Artigue, a UL commit, but the highlight will be a halftime featuring two of the best bands in the area. If you decide to watch UL/Ole Miss on the SEC Network and your Friday's free, the annual battle for bragging rights north of I-10 between Northside and Carencro is at the Crodome this year. Northside features Oshea Dugas (6'5", 300) who already has an offer from Missouri.

Sept.19: Patterson at Catholic/New Iberia. Alabama commitment wide receiver Daylon Charlot leads the Lumberjacks against Ole Miss commitment and the No. 2 high school QB in the state, Jason Pellerin. The next time these two meet will be in Tuscaloosa or Oxford, unless LSU's continued efforts cause Charlot to flip. By the way, the best QB this year is Dion Ray, who covers a 40 in 4.38 and plays for Helen Cox (Harvey). Ray turned down offers from Ole Miss and Miss State to commit to UL. Helen Cox is not scheduled to play any closer to Lafayette than Kenner, at least until the playoffs.

Sept. 26: Acadiana at Lafayette. Classic though lop-sided rivalry. The Wrecking Rams, defending 5-A state champions, haven't lost to LHS since 2006 and lead the series 53-28-1. LSU commitment tight end Bry'Keithen Mouton and Tulane commitment Malik Eugene give Acadiana a big edge, but you never know. Expect halftime to be the best Battle of the Bands of the year. Meanwhile, St. Thomas More should host a closer game when perennial power Evangel returns to Lafayette on consecutive Fridays (its first trip from Shreveport is Sept. 19 at Northside). The Eagles' Jerry Tillery should be easy to spot at 6 foot 7 inches and 325 pounds. He's committed to Notre Dame. Almost a year ago to the day STM blasted Evangel 26-0 only to lose a rematch in the playoffs 32-29. Now it's best two out of three. October games to see are available on request, but if you have any fun at all in September you'll want to plan your own itinerary. Just be sure to include games in Delcambre, Eunice and my favorite venue, Cecilia.