On Wednesday, Judge Martin "Marty" Feldman handed down a decision that will most assuredly define his legacy on the bench. 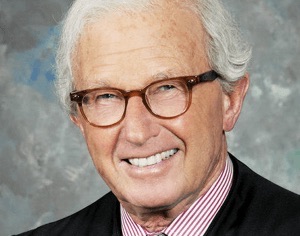 In the summer of 1957, President Dwight Eisenhower appointed a Tulane Law professor to serve as a Judge on the Fifth Circuit Court of Appeals, and although the professor's credentials and his political persuasion were probably more than sufficient to convince Eisenhower and the Senate of his qualifications, his name, an almost perfect aptronym, probably helped too. Today, Judge John Minor Wisdom, who died in 1999 at the age of 93, is generally considered one of the most towering and influential figures in the history of Louisiana law. When he was well into his eighties, in 1993, he received the Presidential Medal of Freedom, the country's highest civilian award, and a year later, the Fifth Circuit's opulent headquarters (which, depending on who you ask, ranks as New Orleans's first or second most beautiful office building, in a city that does not suffer from a lack of beautiful buildings) was named in his honor.

In the twilight years of his life, Judge Wisdom was showered with praise and gratitude by his country, not just for his decades of service on the bench but for his courageous and bold efforts at advancing civil rights in the American South. "He ordered integration at the University of Mississippi, joined decisions that eliminated racial discrimination in jury selection and voter registration in Louisiana, and wrote several decisions increasing the pace of school integration," writes Dennis Persica of The Times-Picayune. These were not easy decisions, and they were not without personal risk. Wisdom's home, Perscia reports, "was the target of people virulently opposed to his rulings: Two of his dogs were poisoned, rattlesnakes were thrown into his yard, he got crank calls late at night."

In the summer of 1957, John Minor Wisdom, the future civil rights pioneer, hired his very first law clerk to work alongside him in the Fifth Circuit, a student of his from Tulane Law, graduate of the class of 1957, a Jewish kid originally from St. Louis named Marty Feldman.

On Wednesday, Judge Martin "Marty" Feldman, former law clerk now of the Eastern District of Louisiana, handed down the most important decision of his long and distinguished career, a decision that will most assuredly define his legacy on the bench. But unlike his mentor, Judge Feldman, now eighty years old and now a Catholic, will not be remembered as a pioneer for the equal rights of all Americans. Fairly or not, he will be remembered for arguing that the United States Constitution allows Louisiana to discriminate against citizens on the basis of who they love.

To be sure, other federal judges have put forth the same argument. It's a view shared by United States Supreme Court Justice Antonin Scalia. But Feldman's opinion is notable because, in 2013, the Supreme Court held in United States v. Windsor that the federal government had no rational basis or compelling interest in denying benefits to married same sex couples, striking down portions of the federal Defense of Marriage Act. Since Windsor, every other federal and Circuit court in the nation has recognized that if the federal government does not have a "rational basis" in discriminating against married gay and lesbian couples, then, under the 14th Amendment, the states don't either.

Yesterday, Judge Richard Posner of the 7th Circuit, a Reagan appointee and a man generally considered to be one of the country's most brilliant and influential legal scholars, wrote the unanimous opinion in a case striking down the bans against gay marriage in Wisconsin and Indiana. Quoting The Washington Post (bold mine):

The unanimous decision issued by the 7th Circuit Court of Appeals came just over a week after the court heard oral arguments in the two cases. Writing for the court, Judge Richard Posner said Indiana and Wisconsin "have given us no reason to think they have a reasonable basis' for forbidding same-sex marriage."

"The challenged laws discriminate against a minority defined by an immutable characteristic, and the only rationale that the states put forth with any conviction - that same-sex couples and their children don't need marriage because same-sex couples can't produce children, intended or unintended - is so full of holes that it cannot be taken seriously," Posner wrote.

Judge Feldman, however, took that rationale seriously, becoming the first in the nation to suggest, in the aftermath of Windsor, that a gay marriage ban is constitutional because Louisiana has a "rational basis" in ensuring that marriage is about procreation or, in his words, "linking children to an intact family formed by their two biological parents." Of course, that's not true; it shouldn't even be taken seriously.

In Louisiana, convicted serial murderers on death row can marry one another in prison, as long as they're straight. In Louisiana, a 95 year old man can marry an 18 year old girl. In Louisiana, a father of 10 children from 10 different women that he has married, used, and abused and who has never paid a dime in child support in his life can marry wife number 11, no questions asked.

Because marriage is a "fundamental right." There's nothing that the State of Louisiana can do to prohibit those marriages, because the Supreme Court has already ruled, over and over again, those marriages are protected. But so far, those cases have all involved opposite sex couples, and until the Court grants certiorari on a gay marriage case, states like Louisiana will continue to argue that there's a distinction between granting a marriage license to two women with three adopted children who have been together for thirty years and two serial killers behind bars: The serial killers, hypothetically, could produce a biological baby together, and there's nothing more important to the State of Louisiana than ensuring that baby has an "intact family formed by two biological parents."

Gay marriage is controversial and remains unpopular in Louisiana, a state largely dominated by religious conservatives.

In 1957, the year Judge Wisdom was appointed to the Fifth Circuit, school integration was controversial and unpopular. In 1960, an avowed segregationist mounted a serious campaign for the Governor's office. White elected officials routinely purged the voting rolls of black voters without cause. Jimmie Davis won the 1960 campaign by aligning himself with white racists, and in his first year in office, he enacted a law that withheld welfare and social services for thousands of African-American children, not because they weren't otherwise legitimately qualified but because they lived in single parent homes (usually with their mothers) and the state didn't want to promote "living in sin." It made international news.

Thirty-one years later, a former grand wizard of the Ku Klux Klan was the Republican nominee for Louisiana governor. It, too, made international news.

Our history is ugly and filled with examples of bigotry masquerading as good public policy.

Let's not be fooled or misled here: Louisiana's gay marriage ban is merely the latest iteration of institutional discrimination, shamefully hiding behind the veneer of religion and morality and the fiction of "tradition."

This discrimination has been largely championed by those whose own sense of human empathy and fundamental decency is constrained by their fearful, unquestioning allegiance to rigid orthodoxy. And it's been enabled by members of the media and elected officials who know better but are paralyzed by their own fears of challenging anything that is popular, lest they lose readers or viewers or voters.

It is a shame to me that Judge Feldman, in the twilight years of his career, would not follow his mentor's lead, because, in a way, he just wrote the first sentence of his own obituary. And the thing for which he will be most remembered isn't for courageously standing up against a clearly discriminatory law; it's for writing a sloppy decision based on bad logic to temporarily halt an inevitable, inexorable victory for equal rights in Louisiana and all across the country. It's for being on the "wrong side of history."

In 1967, ten years after he was appointed to the Fifth Circuit, Judge Wisdom wrote the majority opinion in a case called US v. Jefferson County Board of Education. And in the now famous passage, he wrote:

Judge Feldman, who has been roundly ridiculed for beginning his opinion on the Louisiana gay marriage case by suggesting homosexuality was a "lifestyle choice" and for later comparing laws protecting same sex couples to laws protecting incest, should have sought the wisdom of Wisdom. In 1967, Judge Wisdom courageously reminded Southerners that they can't use the Constitution to justify discriminating against people on the basis of race, and because they had done so in the past, it was now important to ensure that we "undo the effects of past discrimination."

Wisdom's legacy, however, is set in stone. In his book Champion of Civil Rights: Judge John Minor Wisdom, author Joel William Freedman writes about the outpouring of love and praise Wisdom received after he passed away in 1999. "On Saturday, May 15, 1999, just two days before his ninety-fourth birthday, John Minor Wisdom, the sole surviving member of "The Four" passed away. The death of this judicial giant generated more than a score of laudatory obituaries in media publications across the entire breadth of the country. One legal historian celebrated Wisdom as "the legal scholar who wrote opinion after opinion that desegregated courthouses throughout the Deep South and put blacks on juries, in the voting booth, in state legislatures and in integrated classrooms."

Congressman John Lewis, according to Freedman's book, said Judge Wisdom "represented a new breed of white judicial leadership, and he must be looked upon as a brave and courageous member of the bench who helped tear down the walls of segregation and the walls of racial discrimination. He represented the best the South had to offer."

I imagine that if he were alive today, Judge Wisdom would have told his former law clerk to stop making a mess, because it takes generations to clean up what a single judge can do in a single, sloppy opinion.