A consortium of local artists turn recycled tin ceiling tiles into art works to benefit the Children's Museum of Acadiana. 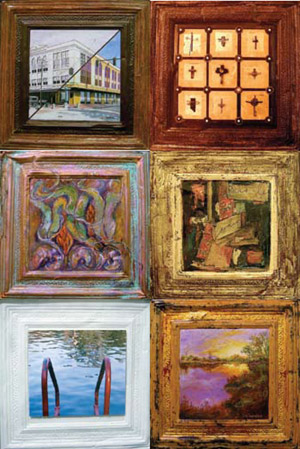 Give an artist a rusty, dented 88-year-old pressed tin ceiling tile and you never know what sort of work of art will come back. Take sculptor Diane Pecnik. “I work in the middle of my garden,” she says. “As I lived with the piece, I realized the rusty lines in the tile had an organic pattern, like the branches of a tree.” Pecnik approached her work, “Down and Down I Go. Round and Round I Go,” from the tile’s point of view — the ceiling looking down. The rusty cracks sprouted leaves, while the back of the tile grew roots.

In 1925, pressed tin tiles decorated the ceiling of Heymann’s Department Store, which now houses the Natural History Museum. During the renovation of the building, the tiles were removed and headed for a dumpster before Martha Day at Teche Drugs and Gifts rescued them. (Some of those tiles are visible, reused for their original purpose, at Teche Drugs.) Day donated about 70 of them to the Children’s Museum of Acadiana, located in another of Maurice Heymann’s buildings. The museum staff handed out the tiles to 73 local artists, each of whom is creating a work of art on the 24 x 24 inch tin squares, which will be exhibited in a group show, then sold as part of a fund-raiser for the museum.

There was clearly some energy speaking to artist Don LeBlanc as he was working with his tile. “When I received it, the metal was crumpled and mangled,” he says. “In order to get a surface I could work on, I had to hammer and press on it to get it close to flat. I was holding it down with my left hand, and I could see how the shape of my hand interacted with the space.” An open hand is the image Leblanc went with, outlined with a metal punch to imitate the original decorative design. There’s still a lot of the old tile left in the new work of art with its rusty frame and crumpled surface. The open hand has strong iconography: bounty, justice, blessing, protection, truthfulness, faithfulness and loyalty. “That’s what I wanted as a symbol for the community,” LeBlanc says. He titled his piece “Fidelity.”