... but a 3D concert-movie treatment makes U2 even larger than larger-than-life.

In the very early ’80s, a transfer student showed up at a small Opelousas high school with a well-worn tape of this Irish rock band that he was really into. Curious students decidedly comfortable in the radio-play pop-culture mainstream crowded around his homeroom desk, passing his Walkman hand to hand like it was some high-school Holy Grail. Maybe kids out in the world knew these songs, knew these four musicians from Dublin already, but in that classroom, to a bunch of youngsters who hadn’t yet learned to like anything they didn’t already know, “I Will Follow” was a life lesson — maybe one of the longest-lasting for some. 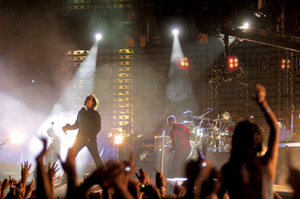 It’s not like these kids had just discovered a totally obscure band that no one else knew about or even like they had experienced sea-change songsters like Radiohead for the first time (that eye-opener would come later), but, still, something kind of exotic and exhilarating had just snuck in to their pop pap existences. In its own who’d-have-thunk-it way, that tape would be a window to something bigger than anyone could have imagined back then.

All these many years later, that little band from Ireland belongs to the whole world. It’s made it almost impossible to imagine a time when it wasn’t a household name. U2 might be the biggest band on the planet. Kids in much smaller schools in much more remote locations know Bono, the Edge, Adam Clayton and Larry Mullen Jr. — and can enthusiastically sing every word of every song they’ve ever recorded together. U2 has managed to keep its original fans and simultaneously draw in a new generation, a rare feat in today’s flavor-of-the-month, attention-deficit disorderliness. They keep reinventing themselves into relevance. So it’s incredibly fitting that the band’s latest project is a 3D concert film, a step in the cinematic restoration of that which was once considered charmingly retro.

On the heels of a surprisingly strong Beowulf, three-dimensional film continues to make a comeback, and the form could have found few better friends than U2. Everything old is new again — and artistically stunning. It will help, of course, if your mp3 player overflows with selections from the band’s discography, but even less fan-based movie people should be interested in U2 3D, which represents a dazzling leap forward in live-action movies filmed and shown using digital 3D technology.

A mash-up of multiple shows and individual tour stops on the band’s most recent tour —  footage includes Mexico City, Sao Paolo, Santiago, Buenos Aires and Melbourne — U2 3D opens in a place called “Vertigo,” a fitting collision of form and function if ever there were one. “You give me something I can feel,” Bono belts out, and there’s a jolt of spiritual recognition. It’s almost as if the audience could reach out and flick Mullen’s cymbals themselves. Directors Catherine Owens and Mark Pellington used nine cameras to create that sense of reality, an achievement they sustain throughout the film’s well-paced 85 minutes.

The filmmakers even go one better than reality: there’s really no other way audience members could ever feel as though they were sitting at the feet of a beautifully lit Edge giving “Sunday, Bloody Sunday” all he’s got. Or feel like they should duck to miss the neck of Clayton’s bass guitar. Or be quite so cheek-by-jowl with Bono’s bizarro stage antics and crazy charisma. Phil Joanou tried it, with admirable effort but ultimate failure, in 1988’s Rattle and Hum, failure because this level of you-are-there sensation requires a three-dimensional format. That breath-away closeness is what part of what makes U2 3D such an interesting cinematic experiment. If The Edge, fairly stoic guitar god that he is, mesmerizes, imagine the implications for future fiction-based 3D films.

The concert continues with selections, old and new, a continuum of songs highlighting Bono’s longtime bent for writing about social, political and religious issues: money-grubbing television evangelists; The Troubles of Northern Ireland; ever-elusive love, peace and common cause. Animation is sometimes used to highlight the action, and the backgrounds occasionally and momentarily become foregrounds (particularly in the film’s psychedelic final number with its flying alphabet soup), but the truest and best 3D effects are seen simply in the mythic swirl of lights, smoke and shadow. For fleeting moments, U2 3D is more real than any reality. Hollywood would do well to notice that and start singing along a little more often.