"Ask your friends and neighbors in law enforcement and they'll tell you who to vote for, and that person is Keith Stutes, our next DA." 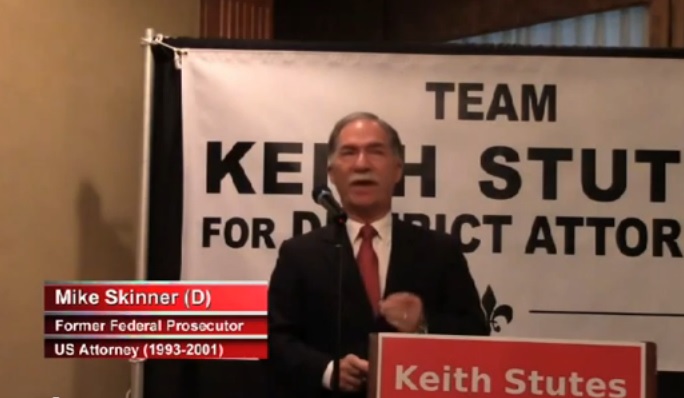 Speaking at a campaign kick-off for Keith Stutes - a former Assistant DA gunning for the job of his former boss - Skinner rails on Harson, describing the upcoming election as one of the "most important in the last 20 years."

In a YouTube video of the speech (posted below), Skinner, who served as a federal prosecutor between 1993 and 2000, says Harson needs to go.

The reasons, says Skinner, are many. Here are a few:

I'm fed up. I'm fed up with reading the headlines about another person who's had several arrests for violent crime who goes out and robs and kills another person when that person should be in prison and not out on the street. And I hope you're fed up, too.

I'm fed up with the drunk who has had several previous DWI convictions, and being out on the street and running into and killing a young person when that person should be behind bars, and not behind the wheel of a car. And as a former federal prosecutor, I'm really fed up with a district attorney's office that instead of cooperating with the FBI is being investigated by the FBI.

Ask your friends and neighbors in law enforcement and they'll tell you who to vote for, and that person is Keith Stutes, our next DA.

Another former federal prosecutor, Donald Washington, who was appointed U.S. attorney in 2001 by President George W. Bush, also gave his thoughts on the upcoming DA's race.

Alluding to the recent OWI scandal that shook Harson's office and resulted in a federal investigation, Washington, speaking during Stutes' campaign kick-off, says:

While I was in office, Keith's name came up all the time. Do you know why? Because we would ask: Where is the Lafayette Parish District Attorney's Office on this issue? You might not believe this, but some of our friends over there would say - 'let's call Keith Stutes' - and that's what they did. When there was a time when we needed the five major cities in this federal district - Lake Charles, Lafayette, Monroe, Alexandria and Shreveport. When the district attorneys got together, guess who was missing? The happiest city in the happiest state had an absent district attorney. We can't afford that, ladies and gentlemen. We need this man here. We need each and every one of you to tell 10 more people that they've got to get to the polls to help this man become district attorney.