Only days after killing his golf course development Chateau Mirage, John Montesano tries to revive it with an appeal to the council. 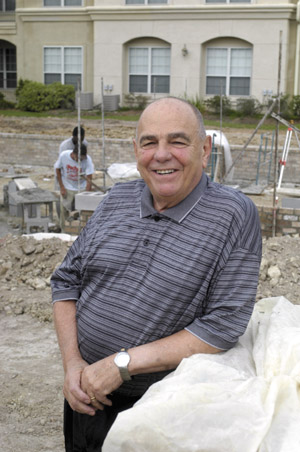 Keeping up with the twists and turns of John Montesano's Chateau Mirage Golf Course development is as challenging as hitting a hole-in-one.

Last Monday night, May 14, it was off. "The project is dead," Montesano said after the Lafayette Planning Commission required him to build portions of three streets in and around the upscale community and championship golf course. The developer, who has agreed to dedicate the rights of way for the streets but doesn't want to incur the cost of building them, believed he would not have time to appeal the decision to the Lafayette City-Parish Council because of the deadline for his financing. By the end of the week, he was singing a different tune. "We're still alive," he now says. "We got there [on the council's May 29 agenda] five minutes before the deadline."

On Tuesday, May 29, the prickly developer will ask the Lafayette City-Parish Council to throw him a lifeline in much the same fashion it has numerous times before. But even while he's trying to negotiate a compromise with the council, Montesano is still sweating it out. His financing, $48 million, also expires May 29. "We're trying to get the bonding company to extend us a few days," he says.

How the council will view the road issue this time around is anybody's guess. Montesano's history of missed deadlines on getting roads built ("The Missing Links," July 12, 2006), along with the development's drainage plan, has held up the project for more than four years. The development includes 331 golf course lots and 71 patio home lots.

Councilman Bruce Conque, who attended the Planning Commission meeting, is optimistic middle ground can be reached, but his colleague, Lenwood Broussard, in whose district the development lies, wants to reserve comment until after he studies the Planning Commission's infrastructure requirements. "I need more of the facts," Broussard says.

What caused this latest snafu is the fact that Montesano did not own all of the property he planned to develop (long a contentious point between him and local officials) and in the end was unable to negotiate with an order of nuns, Convent of the Most Holy Sacrament, who own acreage in the eastern portion of his proposed golf course. He says he offered $3.3 million for the nuns' 24 acres. "They prayed about it, and that was it," Montesano says. Because the developer couldn't buy that tract, which was the entrance to 50 additional acres owned by two more groups, he had to redesign the course. On Monday of last week, he presented a revised plan, which now includes acreage north of Ridge Road, to the Planning Commission. The commission approved the new plan subject to several conditions, among which is that Montesano pay to extend Curran Lane, which runs on the side of the Ambassador Caffery Wal-Mart, to Rue de Belier. "That's outside of my subdivision completely, but I gave them the right of way for that free," Montesano says. In all, Montesano says he has donated 11.5 acres valued at $700,000 to $800,000 for rights of way.

Councilman Conque says he'll consider supporting Montesano's position on Curran Lane, but the official is inclined to back the Planning Commission's decision that he should foot the bill for constructing a road behind his apartment complex, Chateau des Lions. "I support every right of way donation," Conque says. "Now what he has to build is up for negotiation as far as I'm concerned."

Addressing traffic congestion near Chateau Mirage's busy Johnston Street/Ambassador Caffery intersection is utmost on parish officials' minds. Not securing those 74 acres from the three groups of property owners prevented Montesano from building one of the roads he had long promised local government, and that's not likely to sit well with those officials. In exchange for Lafayette Consolidated Government taking South Domingue Road extension off the books, Montesano committed to build a connecting road behind the old K-Mart from Ridge Road to Target Loop, which runs in back of T.J. Maxx and PetsMart in the Acadiana Square Shopping Center. Target Loop would thereby have allowed motorists to avoid Ambassador Caffery altogether to get to the mall area, because it would have connected with Town Center Parkway (another required road Montesano has since built) and diverted this traffic to the new Rue de Belier extension, a four-lane $7 million LCG project scheduled for completion in the fall of 2008. Had Montesano built this connecting road, motorists would have been able to take Domingue Road from Congress to Ridge, and onto his road behind K-Mart, bypassing Ambassador and Johnston Street altogether (until they get to Duhon, which would then feed them onto Johnston south of the mall). Instead, phase II of South Domingue, which will now continue south to Target Loop from LCG's recently completed phase I (from Congress to Ridge), is back on the long-term thoroughfare plan.

By ordinance, Montesano was supposed to have completed that K-Mart connecting road in early December 2006, but he negotiated yet another extension while local officials and his engineer haggled over drainage issues. That, too, expired recently.

"I give him a lot of credit for trying to get this [project] off the ground," Councilman Broussard says. "But [South Domingue] is a bitter pill for me," he continues, noting how important the road extension has been for his district. "Now we have South Domingue Road back on the thoroughfare plan with no funding."

Once built, Montesano agreed to turn his roads over to LCG, but after Monday's Planning Commission meeting he threatened to back out of the deal and convert Town Center Parkway into a toll road. He admits that kind of rhetoric has not always endeared him to officials who have influence over the project, which he claims will generate $10 million to $15 million a year in taxes. "There are a lot of different personalities ... people who don't care for me," he says, "but the project should stand on its own merits and not on personalities."