If you didn't know Alison, Sheriff Mike Neustrom's 42-year-old daughter who died Wednesday after battling cancer for a year, you missed out on something really special. 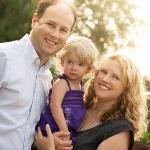 If you didn't know Alison Neustrom, Sheriff Mike Neustrom's daughter who died Wednesday at the age of 42 after battling cancer for less than a year, you missed out on something really special.

Her brave fight against pancreatic cancer, which she documented on her CaringBridge website, revealed an inner strength and optimism few of us will ever know - and spoke volumes about the beautiful soul her hundreds of friends and family members already knew so well. For 11 long months, the lovely, curly haired blonde with a contagious smile managed to inspire others with every word she wrote.

The research director of PAR, Alison dedicated her short life to helping people who, for whatever reason, were "struggling on the margins of life," according to her obituary. In addition to her husband and her large, loving family of relatives and friends, she leaves behind a 2-year-old daughter, Ceci, named after Alison's mother.

Alison was best friends with The IND's founding editor, Jeff Gremillion, who will deliver the eulogy at her funeral Monday. He posted this on his Facebook page Thursday:

As I begin to absorb this loss, I'll take comfort in having had a chance to visit with her not long ago, and thank her for choosing me to play a special role in her life - for trusting me, believing in me, needing me, loving me. For crying with me some, and laughing with me more. Truly, as I think of it now, there are no other accomplishments in my life I'm prouder of, or gifts that mean more.

She did so much for so many, through a career spent helping the poor and the struggling, and through second-nature good deeds for a huge network of relatives and friends. (She didn't want to be remembered as a saint or a martyr, but she was pretty darn close in my mind.) But what I honor her for right now is for simply making me smile again and again and again, often with nothing more than a brief chuckle - and chuckle is the word for it; she was definitely a chuckler - or a widening of her clear blue eyes. I miss her so much already.

On Sept. 4, Jeff set up a gofundme page to raise money for Ceci's college education, no doubt warming Alison's heart. You can donate here.

Below is her obituary:

Father Chester Arceneaux, rector of the Cathedral of St. John the Evangelist, will conduct the funeral services. Interment will follow the services in St. Charles Borromeo Cemetery in Grand Coteau.

Alison was born and raised in Lafayette. Following graduation in 1993 from UL Lafayette with a degree in sociology, she moved to Baton Rouge and became a resident there for most of her adult life. She attained her Master's of Social Work in 1996 and a Ph.D. in Sociology in 2001, both from Louisiana State University. Following graduation, Alison was a Post-Doctoral Fellow at the School of Social Welfare, University of California, Berkeley. Later, living in San Francisco, she worked as a Senior Research Analyst at the Center for Families, Children and the Courts under the Administrative Office of the Courts, Judicial Council of California.

In 2011 Alison married the love of her life, and while she had less than a handful of years in the companionship of her dear husband, Dave Carner, and their beautiful "firecracker" of a toddler, Ceci, she believed firmly that her life had been defined by blessings and joys, and that God was loving. She reflected often on her hopes for a safe and vibrant future for Dave and Ceci, and she trusted that God would envelop and care for them through the enduring love and loyalty of her close-knit family and friends. True to character, her final thoughts and questions were of the well-being of others.

Alison was a warm, open, principled and loving woman who dedicated her life to social justice and helping those less fortunate. Over the course of some two decades, her research and work spanned issues ranging from child abuse and juvenile justice to anti-poverty programs and hurricane recovery efforts. From 2004 to 2009, she worked for the Louisiana Department of Social Services, where she eventually was appointed to the position of Assistant Secretary, Office of Family Support. From 2009 onward, she was Vice President of Public Policy at the Louisiana Association of Nonprofit Organizations (LANO), and then Research Director at the Public Affairs Research Council of Louisiana (PAR).

Alison was known for her ready smile and way of putting people at ease even before they knew it had happened. She was one to persevere, overcoming a childhood stutter to join the high school debate team. As a college student, she never considered any career other than helping those struggling on the margins of life, whether because of poverty, racism, illness or devastating turns of fate.

She believed in forgiveness in her personal life, second chances for neighborhoods and communities, and investing in Louisiana and the nation for the broad promise of progress. Her aims went beyond restoring physical health, material necessities, fair opportunities, or stable livelihoods; she worked so others would have equal access to the durable dignity that comes through the redemption of spirit.

Alison had an easy and convivial manner. All of which proved both disarming when she would genially but directly challenge others in political argument or stand her ground with equal measures of civility and conviction. She loved her parents and siblings unconditionally and knew that she was loved unconditionally, a belief that enabled her to bring calmness as well as firmness to discussions of difficult issues in life.

She loved: the color orange, oranges, clementines, and sweet potato casseroles, yellow dresses, crawfish boils, attending games of the Ragin' Cajuns and New Orleans Saints, pork tenderloin, her Mama's gumbos, her dad's guitar playing, sidecar cocktails, To Kill A Mockingbird, The Sound of Music, sunshine and sunflowers, the sunset drive across the Atchafalaya Basin heading home to Lafayette, but mostly, simple ordinary family-time with Dave and Ceci, the loves of her life.

Family was so important to Alison, especially being surrounded by her 75 first-cousins, nieces and nephews from the Neustrom and O'Keefe clans, which included her godchildren Patrick Neustrom of New Iberia, LA and Thomas Catterall of London, England. She worked hard to see that baby Ceci well-knew her own first cousins: Joe Kishbaugh, Owen and Evie Neustrom, and Michael, Dylan and Nathan Neustrom.

Alison was so grateful for receiving the awesome medical expertise from Drs. Robert Chasuk, Michael Castine and his wonderful assistant Elton, and all the loving chemo nurses at Baton Rouge General; and Drs. Yuman Fong, Nancy Kemeny and especially Robert Siegelbaum of Memorial Sloan Kettering in New York. Alison was informed as to the most cutting edge trials and research in the world, which were devotedly researched by her aunt, Maureen O'Keefe Ward. Words are inadequate in conveying that depth of gratitude. She and her family were totally supported in this journey, especially from their extended family, life-long friends, neighbors and prayer groups ("The Stones") who called, wrote, visited, prayed, sent relics and rosaries, donated, baby-sat, cooked, researched, videoed her, but most of all were simply "there" for her.

In lieu of flowers and in keeping with Alison's love of others, her family asks that you make donations to the charity of your choice, or to Hospice of Acadiana (www.hospiceacadiana.com/donations), which so lovingly cared for her in her final two weeks, under the direction of Dr. Morris Hoffpauir.