So far, Lafayette Parish has been able to absorb the new inventory of hotel rooms, and the heated competition is making overnight stays more pleasant. Jim Haidet saw a lot of potential in the Lafayette market a decade ago when he opened his first hotel here, Best Suites on Kaliste Saloom Road. His hunch about Lafayette’s growth was right on, and the hotel performed so well that he teamed up with another group of investors five years later and developed a 95-room Hampton Inn and Suites just across the street on South College Road. That property quickly began beating his projections for occupancy and average daily rates, and then the 2005 storms hit, creating a massive influx of displaced residents seeking a roof over their heads. With local hotels running at 100 percent occupancy, surely business would drop off dramatically, Haidet and other hoteliers believed, once people found permanent housing. That big dip never came for Haidet’s properties — and recent figures suggest others have continued on much the same track. 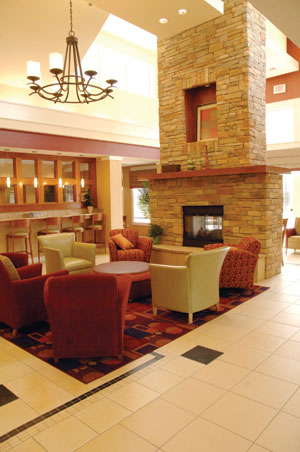 The Residence Inn by Marriott opened on James Comeaux Road in December.

“The best guess was we would never be able to equal what happened in ’06 [in the aftermath of hurricanes Katrina and Rita], but we surpassed it,” says Gerald Breaux, executive director of the Lafayette Convention and Visitors Commission. Lafayette Parish’s hotels took in $68.04 million in 2007, besting by almost 3 percent the $66.13 million in business generated in 2006. In January of this year, the parish’s hotels generated $4.71 million in sales, almost $1 million more than in January of last year. A 4 percent hotel-motel lodging tax is assessed on top of the 8.5 percent sales tax on those gross amounts, so these increases have been beefing up the parish’s tax coffers as well.

Both occupancy and average daily rates in Lafayette Parish were higher in 2007 than 2006, according to Smith Travel Research, with the state as a whole also outperforming the national averages.

“If that’s an indication of trends, it’s a good trend,” Breaux says.

Living in Oxford, Ohio, hasn’t prevented Haidet from keeping his pulse on these trends in the Lafayette economy — and while he won’t disclose specifics about how his hotels are performing, he says there is still room for expansion. That’s why in December, Haidet, who currently has a portfolio of 12 hotels in six states, opened his third Lafayette property merely a half mile from the other two. The new Residence Inn by Marriott, a 98-room hotel, is a welcome addition to developer Glen Richard’s newly-renovated James Comeaux Road shopping center (Richard is a also a partner in the hotel), because it replaced a big-box eyesore, the long-vacant K-Mart building.

But Haidet is not done yet. “I like the market a lot,” he says. “People say it’s oil and gas, and that’s a factor, but it’s not the end-all. It’s a good, diversified market, the university, the medical,” he continues. “Even with 9-11 we probably saw only a two-week decrease in business. After the initial shock [our numbers] were better than ever.”

Haidet is far from alone in his willingness to speculate on Lafayette’s continued prosperity. Permits for new hotel construction and renovations to existing properties totaled almost $15 million in 2006 and $13 million last year. A $3 million Holiday Inn Express on Kaliste Saloom Road, across the street from Saloom Office Park, and a $10 million Staybridge Suites on Kaliste Saloom Road behind Hotel Acadiana are under way, and a Value Place Hotel at 944 Ambassador Caffery Parkway (near I-10) and Wingate by Wyndham on East Kaliste Saloom Road are awaiting permits, according to local government records.

The Smith report indicates that Lafayette Parish had 5,558 rooms at the end of 2007, and LCVC’s Breaux says since December 350-400 more rooms have been added in the city and across smaller municipalities in the parish.

Additionally, River Ranch developers, who are taking down 125 acres of Boustany family property at the corner of Kaliste Saloom Road and Ambassador Caffery, are planning a hotel as part of their new traditional neighborhood development. And if he can deliver, Dr. S.L. Sethi of Canton, Miss., developer/owner of the Hilton Garden Inn on UL Lafayette property on West Congress Street, will introduce the Hyatt hotel group’s Hyatt Place concept to Lafayette. Early last year Sethi purchased 11.5 acres that adjoin the Pinhook Road Hilton hotel site for approximately $3 million. The land had about seven vacant buildings on it, mostly dilapidated structures that have since been torn down. The property has Pinhook Road frontage, is bordered by the Hilton and Vermilion River on the south and is accessed by Calco Boulevard.

To make his hotel site (at least one restaurant is also planned) viable, however, developers say it is critical that Sethi get a traffic light at Pinhook Road and Marjorie Boulevard — located across the street from his property and next to the Texaco station — and that’s not yet been approved. Tony Tramel, Lafayette’s traffic and transportation director, confirms that his department and the state DOTD are tentatively planning for its potential installation but stresses the approval process has not been completed. “An LCG/LaDOTD intersection improvement on Pinhook from the Hilton through South College is under design at this time,” Tramel says. He notes that “very specific traffic data and analysis is needed” to justify any traffic signal, stressing that LaDOTD access and signal criteria means even a more thorough effort will be required before any decision can be made.

With hotel construction at an all-time high in recent years, local hoteliers express some concern that Lafayette may be overbuilding its inventory — especially by fast-track developers angling only to take advantage of Go Zone benefits — but they all acknowledge that the new competition has benefitted the overall market in several ways. For one, it’s led to the development of at least two upscale “boutique” hotels — River Ranch’s Carriage House and downtown’s The Juliet — a product that Lafayette did not previously offer.

More important, however, is that this heightened competition — especially speculation that a respected brand like Sethi’s Hyatt Place may be on the way, not to mention the impending threat from a host of casinos in nearby communities that are building hotels with meeting room space — has forced several tired old properties into considerable renovation. The Hilton, for example, completed a $9.5 million improvement in 2006 that included a 2-inch overlay of its parking lot and a complete overhaul of all its guest rooms, meeting spaces, lobby areas, public restrooms and guest corridors. Sold Feb. 5 to a partnership that includes Interstate Hotels & Resorts of Arlington, Va., and Harte Holdings of Ireland, the Hilton is readying for its second round of renovations, a $2.5 million investment, according to General Manager Jimmy Thackston.

Retaining that meeting and convention business is also the primary concern of Hotel Acadiana GM Mark Arnold, who came to Lafayette from Houston in June of last year. Arnold believes Lafayette will still have the upper hand over these outlying properties because of its amenities, like the range of quality restaurants, museums and other attractions, and he says it will continue to keep its weekend numbers high with the many festivals and related events. “It’s what happens Friday to Sunday as to how well a hotel will do,” he says. “The challenge in Houston has always been the weekends.”

Hotel Acadiana, however, has put the wheels in motion on a plan Arnold believes will give it a big competitive edge. Beginning in March, the hotel will undergo a massive “top to bottom” renovation, also adding a new restaurant — all part of its upgrade to a new, highly-respected upscale brand by Holiday Inn. “We will be a Crowne Plaza after we are finished,” he says, noting that a final dollar figure has not yet been put on the project. “We will be the second Crowne Plaza in the state.”

Arnold says the renovation should be complete by the end of the year.

In the meantime, Haidet is continuing to scout the market in hopes of developing a fourth property, which he says will be in a different area of Lafayette. “You want to be careful you don’t cannibalize yourself,” he says, explaining that his existing concepts are in close proximity but target a different clientele. The new Residence Inn, for example, caters mainly to a clientele planning an extended stay. “If you’re targeting different segments, it makes sense.”

Haidet is not concerned that the nation’s economic slump will trickle down to Lafayette and hurt his investments here. “It’s just been a really resilient market,” he says. “We’ve never seen the hotels [in Lafayette] reflect what’s going on in the national market.”