Spurred by a fast-growing medical sector and Go Zone incentives, developers scramble to get office complexes off the ground. 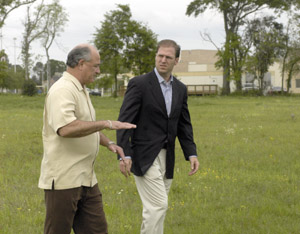 The southeast corridor of Lafayette stretching from Verot School Road down Ambassador Caffery and onto Kaliste Saloom Road has fast become a hotbed of medical infrastructure ' and now developers are hoping medical professionals will forgo years of leasing for office ownership.

With Lafayette's medical sector the parish's No. 1 employer and expansion showing no signs of retreat, a local group is taking a major leap by speculating on a $6 million, 82,000-square-foot medical office complex on Rue Louis at Kaliste Saloom Road.

The team includes Lafayette attorney Jeremy Hebert of Becker & Associates and plans to develop Versailles Square, which will consist of 23 office condos on an 11-acre tract that backs up to the Heart Hospital of Lafayette. The property is under contract for an undisclosed sum with seller John Montesano et al Partnership, among whose partners are Charles Bonnette, Dr. Terry A. Cromwell and Ben Mann, according to the Louisiana Secretary of State's office.

Lots and turn-key packages will be sold at Versailles Square, though Hebert says the developers will retain architectural control of the project.

Versailles Square comes on the heels of a similar development just down the road that has been in the works for some time. Doing business as Lafayette MOB Properties LLC, a group of local physicians led by ENT/plastic surgeon Kevin Duplechain is developing a medical office complex between the Heart Hospital and Lafayette Surgical Specialty Hospital on 7.5 acres. Lafayette Surgical interim CEO Nancy Boutte says the property has been purchased, and construction should begin with the next two months. "At this point, it is close to 100 percent occupied," Boutte says, noting that a number of doctors with a financial interest in Lafayette Surgical are occupants, along with a physical therapy clinic. Designed by architect Steve Oubre, the three-story complex so far has 10 suites of varying sizes.

Much in the same manner that office development is supported by Lafayette Surgical, Versailles Square is banking on its connection to the Heart Hospital of Lafayette, a factor that might make the project much less speculative if a deal can be worked with the physician-owners of that specialty facility. "We've got good prospects," says Harold Lambert of RPI Group, the local company serving as development coordinator for Versailles Square. "We have several groups of physicians that have expressed interest." Their needs range from 2,500-square-foot spaces up to 15,000 square feet, Lambert notes. "We've had a couple of interested attorneys, but we're gearing it medical right now."

On the heels of his success with the 76,000-square-foot Cordoba office complex at Ambassador and Verot School, Jeff Birnbaum, owner of S.L. Shaw & Associates Inc. of Baton Rouge, had hoped to develop that same Rue Louis property but says he couldn't get the doctors to commit to the project. "We were just unable to get together with the doctors," he says. "So we chose not buy the property."

Birnbaum planned to buy 7 acres at the site but walked away from the deal about a month ago. His sold out 15-office complex on Ambassador is only about one-third medical, but the second phase, Province, will be exclusively marketed to the medical community. The infrastructure work is under way on the new 68,000-square-foot office park, and Birnbaum says about 60 percent of those 15 free-standing offices are already under contract. Cordoba and Province have access from both Ambassador Caffery Parkway and Farrel Road, and Birnbaum puts a $12 million to $15 million price tag on each phase.

"All of a sudden we've just exploded from people interested in medical," Birnbaum says, attributing much of the demand to Our Lady of Lourdes' planned relocation of its facilities just across Ambassador. The local hospital, currently located at the corner of St. Landry Street and St. Mary Boulevard, has 45 acres under contract for about $14 million. Owned by two Boustany family members, the Lourdes tract extends from Frem Boustany Drive down Ambassador Caffery Parkway toward Verot School.

All three planned medical office complexes qualify for Go Zone's accelerated depreciation, but the projects must be in service by the end of 2008. "The Go Zone depreciation has really been a significant factor in the interest that we've had," Birnbaum says. He isn't the least bit worried Lafayette may be overbuilding medical offices to take advantage of the Go Zone laws, maintaining that the incentives have made ownership much more attractive than leasing for many medical professionals.

Attorney Hebert says if his deal goes as planned, his law firm will likely relocate from the Oil Center to a lot adjacent the Versailles Square development; another acre will also be available for sale. For Versailles Square tenants, more than 400 parking spaces will be offered, and 25 percent of the property ' including the Kaliste Saloom Road frontage ' is being preserved for landscaping, trees and water features, with sidewalks and a street linking the development to the Heart Hospital.

Records from Lafayette Consolidated Government show that medical sector related construction has been brisk this fiscal year ' which ends Oct. 31 ' with 12 projects permitted since November for a total of $18.6 million, well above the $12.8 million spent on 26 jobs last fiscal year. Leading the way is Lafayette General's new facility for women and children called The Pavilion. It's a $19 million project, but only the first phase, $14 million, has been permitted thus far.

The current fiscal year's figure represents the first time in three years that medical projects will post a year-to-year increase; they'd been on the decline since a whopping $35 million was spent on 19 projects in fiscal year 2002 to 2003 ' the year both Heart Hospital and some of the work for Lafayette Surgical were permitted, along with Women's & Children's $18.7 million expansion.