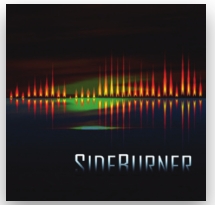 But Sideburner is not a Collapsar rehash. Instead, it injects new life into the genre via — gasp — vocals. Though just sparse offerings — “Slow moving dream that drives me insane” is the entire vocal track for “Slow Moving Dream” — this instrumental lookalike has lyrics.

Judice’s drums provide a familiar spine but the meat around it is decidedly different. Pulling from decades of delicacies, Sideburner pays tribute — without being bound — to hard rock sounds as far back as Iron Butterfl y. Vintage keyboard sounds and grand scale rock segue into newer fare that sounds like 1990s alt rock. A bare-bones approach, wailing vocals and adventurous guitars recall the heyday of hair metal. At other times, it packs the simple and brutal punch of early Metallica. Timing changes and schizoid guitars blur genre lines and bring it to the present.

Pink Floyd infl uences in their delivery come through in a “One of These Days” formula — these aren’t the type on which to base your life. Instead, they are statements or mantras. In other words: less talk, more rock. Were King Crimson raised on the rock they helped create instead of jazz or if The Sword had more leanings towards rock nostalgia instead of epic tomes, their names would have been Sideburner. A perfect example is “The Gospel According to …,” which starts off a bit like The Animals version of “House of the Rising Sun” before breaking into a trudging alt-90s rock memento before dipping into psychedelic keyboards and ending with a very modern metal sound that has the feel of what should be played before two gladiators battle to the death.

Though heavily infl uenced, Sideburner is not derivative and is its own beast entirely.

Don’t look for poetry here. Instead you’ll fi nd a retrospective of rock funneled through a progressive metal approach. 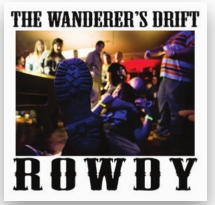 According to their bio, The Wanderer’s Drift has a lot of infl uences. However, the one you will instantly hear on Rowdy is the White Stripes. But, listen closely and along the way older classic rock and modern rock infl uences become clear, with another power duo coming to mind: Local H.

Aside from being a duo — Mego Rene on drums, Church Rowe on guitar — there are a lot of stripped down garage rock, pre-Icky Thump sounds. Though it lacks the punch of “Seven Nation Army,” it benefi ts from stronger drumming from this Meg and a lead singer who does not sound like Jack White looks.

Like the Stripes, Wanderer’s Drift switches lead duties. Unlike the Stripes, Mego’s songs aren’t throwaway tracks. Her “Bruce and the German” (which almost adds a playful dance beat) steals the show about a tall boy at the bar, about whom she says, “I fi gured he could kiss. But, damn, the man can dance.”

A bit of a concept album, Rowdy follows two vagrants making their way across town, rocking out then deciding to rob a bank. Though it links the songs by a common thread via interludes that sound like pocket recordings from the ne’er-do-wells, this does hinder it a bit with a slew of intro recordings that don’t go anywhere and prolong things. Nonetheless, they catch the spirit well: the pair sounds a little too home here, you almost might think it’s for real.

Yet, surprising and cryptic poetry abound throughout, even in songs about being a thief and robbing banks. It’s these well-worded and completely under emphasized lines — “Why would I wait ‘til the walls crash down, knowing that I won’t make a sound to get you back/ No, not after that/ Sulphuric animosity, without reciprocity, creates an illusion that hates you back”— that belie the unpolished vibe of the record and make it worth repeated, deeper listens. 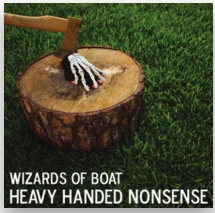 The Wizards of Boat never took over the indie scene but were favorites of some of its top-drawing bands. Their gimmick — featureless black masks, decked out in thrift store suits, sent back from the future to prevent it from happening via song — wasn’t their only draw.

Over fi nely crafted Nintendo synth-pop (before smooth indie pop was cool), they created tongue-incheek — or downright nuts — songs about dinosaurs, dirt bikes and “nice things” that stood out among a music scene that took itself very seriously.

Now, after years of time-traveling or whatever, they are back offering a digital download album of unreleased and alternate versions of their material plus creations from their song-a-week project (on “The Last Song” this endeavor ends roughly: “I’m so f**king tired of writing songs/I thought we could do this but I was wrong”).

WOB, all bizarreness aside, were a fi nely tuned band: Sometimes top Lafayette scenesters were hiding under the masks, one of the lead Twins (Twin A or Twin B, who knows) was rumored to sing in a church choir. That comes through clear in this 37-cut release (available for $1, no less).

Ever unpredictable, WOB offers what they call wedding versions of their songs. Taking “Wild Goose Inn” and giving it a “How Beautiful” treatment. Although amusing, it does offer a caveat: “The Cool Guy” (about a dirt bike) could have been the standout track here, but the version is a bit too pretty. In the midst of the seemingly randomness and off-the-wall humor, there are some choice lyrical nuggets, such as “The only demons in this town are the assholes who try to create them.”

Another gem was always the covers they picked. Back in their heyday, they covered The Riverbottom Nightmare Band from Emmett Otter’s Jug Band Christmas. It doesn’t make this one (you never want to infringe on Jim Hensen), but an ’80s synth dance version of Hall and Oates’ “Maneater” does. As far as covers go, it’s a classic.

Not overly ridiculous but just enough, Heavy Handed Nonsense will stand the test of time for both local indie rock fans who remember the future-past and those in the present-present.