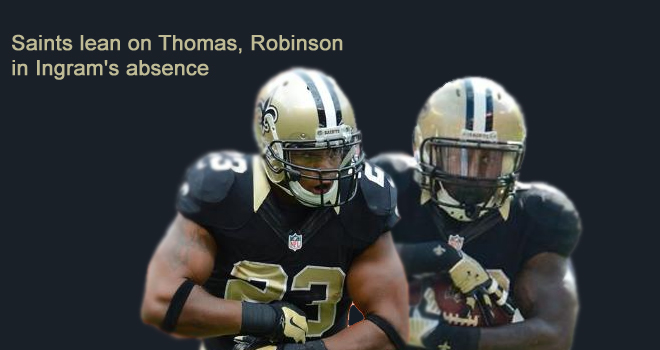 Improving the running game was "a point of emphasis" during the offseason and the results have manifested themselves in the form of substantially greater production. 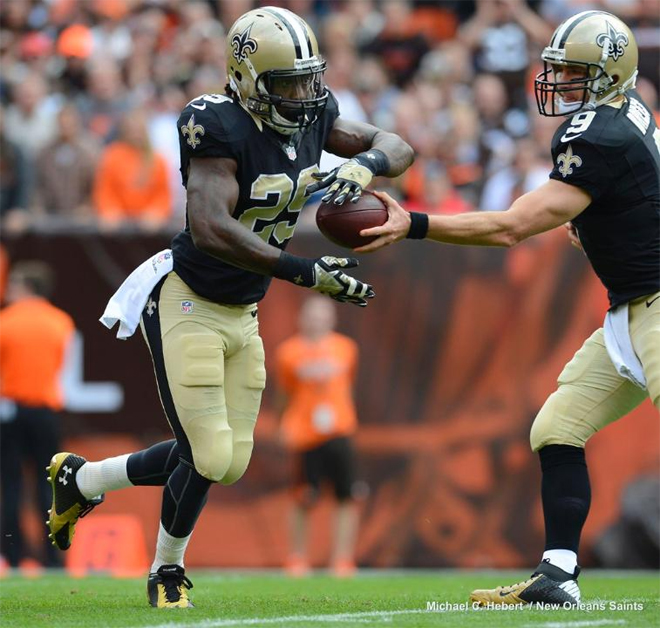 Running back Khiry Robinson takes a handoff from quarterback Drew Brees during Sunday's loss to the Cleveland Browns.

The coach expects that to remain the case, even with his most productive rusher, Mark Ingram, sidelined by a broken hand.

Payton said Ingram, who has averaged 6 yards per carry and scored three touchdowns, won't be able to play Sunday when the Saints (0-2) host Minnesota (0-1) because of surgery to repair his broken hand.

Beyond this weekend, Payton would not speculate how long the injury would sideline Ingram, who had a pair of screws inserted near his thumb to repair a displaced fracture.

"Everything went well," Payton said about Ingram's surgery, adding that the running back's status would be updated "week to week."

Primarily handing off to a rotation of Ingram, Pierre Thomas and Khiry Robinson, the Saints gained 139 yards on the ground during their Week 1, 37-33 overtime loss at Atlanta and rushed for 174 yards Sunday in a 26-24 loss at Cleveland.

Payton said if someone had told him before the season that the Saints would put up those totals and still lose both games, "that, statistically, would be something that would be a little bit of a surprise."

Improving the running game was "a point of emphasis" during the offseason, Payton said, and the results have manifested themselves in the form of substantially greater production on the ground compared to this time last season, when the Saints gained fewer than 80 yards in each of their first two games.

In Cleveland, Ingram played with his broken hand throughout the second half. He finished with 83 yards and one touchdown rushing to go with 21 yards receiving.

"He's been sharp," Payton said of Ingram. "Fortunately, with regards to his procedure, I don't expect it being a long period of time" before Ingram returns.

This week, a heavy load likely will shift to Thomas, Robinson and possibly Travaris Cadet.

"Certainly he's further along here in Year 2 with the whole game. He understands fronts more and where plays are designed to go more and also the protections," Payton said. "He's a physical runner. He's got really good balance and so he'll be fired up for the opportunity and he's already been, really, a big part of our plan."

Likewise, quarterback Drew Brees said he won't be concerned if he has to rely on Robinson to pick up blitzes.

"I'm very confident in his ability to do that," Brees said. "From the first time he stepped foot in our building until now, he's light years in improvement in every facet of the game."

Thomas, who has done much of his work on third down as a blocker and receiver out of the backfield, said he would expect to be more involved as a rusher and that he and Robinson both are prepared to take on Ingram's usual workload seamlessly.

"We try to make sure we're not predictable," Thomas said. "Every last one of us as running backs knows each position."

Notes: In addition to Ingram, C Jonathan Goodwin (elbow), LB David Hawthorne (ankle), FB Erik Lorig (ankle) and S Marcus Ball (hamstring) also missed practice. LB Curtis Lofton (shoulder) participated on a limited basis. ... Payton and Saints players generally declined to comment on child abuse allegations against Vikings RB Adrian Peterson. However, Brees said he hoped the recent series of episodes involving player violence off the field don't result in the public viewing NFL players in general as "a bunch of brutes and that we're beating our wives and abusing our children. ... There's a lot of guys that are doing a lot of really great things. And they represent all the great things about humanity and what it's like to be a leader and what it's like to be a great member of your community."