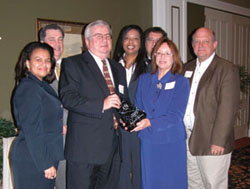 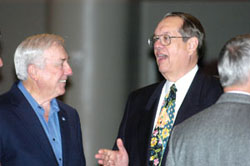 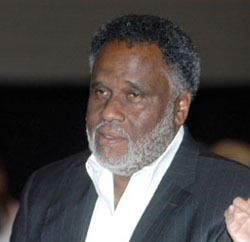 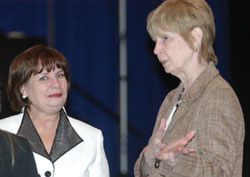 It was his first State of the City-Parish address for his second term in office, in which he ran unopposed, and about 600 people gathered at the Cajundome Convention Center in early February to hear what City-Parish Joey Durel had to say. Durel reflected on his accomplishments like the fiber-to-the-home initiative and disappointments — principally a failure to resolve the longstanding fire and police backpay lawsuit — and made an important economic development announcement: that the film production company Active Finance had chosen Lafayette as its base of operations. The State of the City-Parish address, presented by Acadiana Business’ sister publication, The Independent Weekly, annually marks the launch of the paper’s Speakers’ Series, which is sponsored by IberiaBank. A number of the issues Durel discussed, such as how to adequately fund the needs of a growing community like Lafayette in a way that fits in with Smart Growth principles, are now being tossed about as possible themes for future lectures. Flanked by his new council members, a promising group that so far appears willing to work as a team to move this community forward, Durel also announced that he would present a plan to them to settle the 9-year-old fire and police lawsuit and a week later got the council’s blessing. The council adopted a resolution supporting a repayment of actual wages without interest, about $6.7 million. That’s not likely to be the end of the battle, but hopefully, it’s the beginning of the end. So many local attorneys give their time and talent to help those most in need in our community — the impact of which is too great to measure — so it’s fitting that they should be recognized for their terrific work. The Lafayette Parish Bar Foundation hosted its annual Champions of Justice breakfast Jan. 23 at the City Club in River Ranch, recognizing these attorneys for volunteering a significant amount of their time and legal services, as well as for the monetary contributions they make to the Lafayette Volunteer Lawyers Program. Bar foundation President Jack McElligott of Davidson, Meaux, Sonnier & McElligott presented the Outstanding Attorney awards to the following attorneys: James Bayard, Bridget Broussard, Marianna Broussard, Bianca Chretien, Jessica Clement, Olita Magee Domingue, David Gooch, John Grant, Franchesca Hamilton-Acker, Judy Kennedy, Greg Koury, Sheila Linscomb, Will Montz, Carlyle Paxton, Steven Ramos, Scott Webre, Cassie Willis and Mike Wooderson. Individual attorney awards were presented as follows: Top Lafayette Volunteer Lawyer Pro Bono Award: Greg Koury of Laborde & Neuner; H.E.L.P. (Homeless Experience Legal Problems) Award: Olita Magee Domingue, law clerk to Judge Jules Edwards of the 15th Judicial District; and Protective Order Program Pro Bono Attorney of the Year award: Franchesca Hamilton-Acker of Acadiana Legal Service Corporation. The small and large Firm Awards, for those providing the highest amount of services, went to John Ortego & Associates and Laborde & Neuner, respectively. 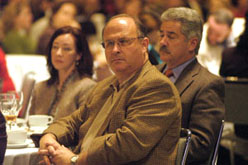 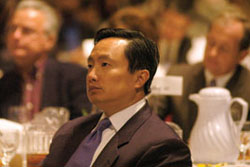 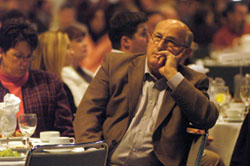