The winning performance of the STM Sparklers, who recently captured the national championship in the pom category at the Universal Dance Association's Dance Team Championship in Orlando, Fla., will air on ESPN2, Channel 36 on Cox cable, this Sunday. (The high school dance team championships begin at 11:30 a.m., so you may have to set your DVR to catch the Sparklers). You can also catch the squad's national championship pom routine live Monday night as part of the opening ceremonies of the Top 28 Tournament in the Cajundome, what will likely be the last performance for the 2007-2008 squad and its seniors, Erin Shannon, Brooke Garber, Alaina Favaloro, Caroline Lemoine and Rebecca Sawyer.

In the UDA competition, the Sparklers, coached by Missy Bienvenu, placed first out of 71 teams in the “small group pom” category (14 members or less) and second in the “small group jazz.” To view the performances online, click here, go to UDA National Dance Team Championship and type St. Thomas More in the search bar. 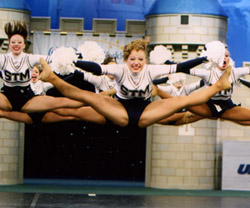 Under the guidance of choreographer Stephanie Manuel, STM’s Sparkler program has enjoyed remarkable success since 1994, winning 14 national titles, eight in pom and six in jazz. But that kind of success requires tremendous commitment and sacrifice. “The team technically has July off,” says faculty advisor Sandra Lagrange. Four-days-a-week practices start Aug. 1 till the end of November to prepare for school performances like games and pep rallies. “Starting the last week in November they begin nationals practices six-plus days per week two to three hours per day,” Lagrange continues. This schedule continues until they leave for Orlando in the first week of February, all the while continuing to perform for football and basketball games and pep rallies.

Tryouts for the 2008-2009 team will be held March 17-19. The team’s summer camp competition qualifies them for nationals the following February. The squad also hosts a "Little Sparkler Dance Camp" the third week in June.