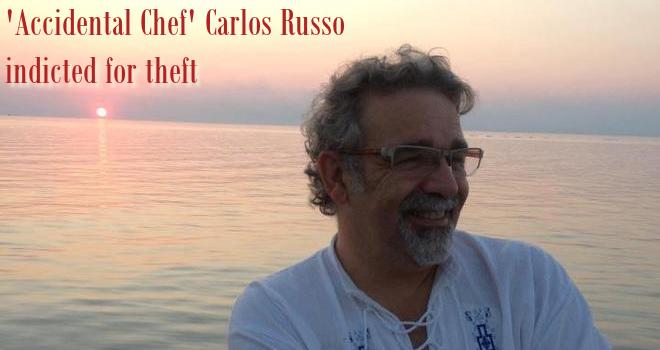 Carlos Russo's sordid history in Lafayette and claims of leading a life dedicated to helping destitute residents may finally be coming to a head. The man who now bills himself "The Accidental Chef" was indicted for felony theft by a grand jury in Lafayette Parish Wednesday.

The alleged theft took place from mid-December 2012 to late June 2013, according to the indictment, which claims 54-year-old Russo "did willfully, unlawfully, and intentionally appropriate a disabled person's funds through the execution of a fraudulent or deceitful scheme."

A person with intimate knowledge of the alleged theft, who asked not to be identified, tells The IND Russo was the mentally disabled man's "representative payee," which means Russo had been approved by the U.S. Social Security Administration to manage the man's financial affairs because he was unable to do so himself. Russo was not paid for his services, as he was supposed to be providing them out of the kindness of his heart, the source tells the paper. Instead, says the source, Russo allegedly used the man's money to pay Russo's own expenses, including rent for the 110 Travis St. office where he operates Unhindered, a nonprofit he started in 2001 (the Secretary of State lists the first filing in 2000) as a food bank, according to online records.

The source who spoke on condition of anonymity says he is particularly upset by the allegations because he was close to Russo and supported him amid claims Russo misappropriated funds in the late 1990s, when Russo was head of The Well, an outreach ministry to the homeless, and part of a larger group of homeless charities in Lafayette (many of which were supported by Lafayette Catholic Service Centers and well-known philanthropists). Russo was fired by his board in July 1999 amid a host of allegations that included gross financial mismanagement and excessive expenditures. Russo was not charged with any crimes at the time and immediately moved on to work at Bethel Baptist Church to set up a similar ministry.

Russo opened The Accidental Chef Cooking School on Garfield Street in late 2010 or early 2011. The physical location has since closed, but his website remains active.

Russo did not respond to an email and a message left on the cell number he has listed with Keller Williams.

Check back with The IND in the coming days for more on this story.