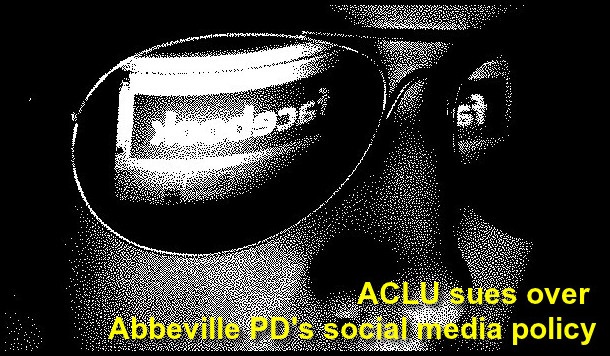 The ACLU of Louisiana has sued Abbeville's mayor and police chief over a policy barring police from any social media use showing the city in a bad light.

NEW ORLEANS (AP) - The ACLU of Louisiana has sued Abbeville's mayor and police chief over a policy barring police from any social media use showing the city in a bad light.

The policy is so vague that the plaintiff, police Sgt. Colt Landry, can't tell what he's allowed to do on social media, said Marjorie Esman, ACLU Louisiana executive director.

"Could you post a photograph of a house that's in disrepair even if you don't do it for the purpose of pointing out the fact that it's in disrepair?" she said. "Maybe it's your house or your grandmother's house. Maybe it needs a paint job. Somebody might say it sheds a negative light on the city. Could you post a negative review of a restaurant that served you a bad meal? ... Could you say 'There's a pothole on my street and it's been there a while and I don't know why the city's not fixing it?'"

Mayor Mark Piazza and Chief of Police Tony Hardy declined to comment Thursday on the lawsuit filed Wednesday for Landry.

Landry faces disciplinary action for a comment he made off-duty on a private Facebook page - a comment that became public when someone else shared it, Esman, said.

Esman wouldn't give details because Landry's hearing is still pending, the ACLU is not involved in it "and it's not at all relevant other than it leaves him in a position where he doesn't know what he can or cannot say in the future."

The policy, copied in the lawsuit, forbids any police department employee from posting, responding to, sharing, liking, tagging or commenting on any social networking site to anything about the department or anything "which will give a negative view towards the City of Abbeville, the Abbeville Police Department or its employees."

"Negative view" is defined as "any insulting, disrespectful, profane or derogatory Post, Comment, Private Message, "Like", Share or Photograph directed towards the City of Abbeville, the Abbeville Police Department, its officials, employees or citizens."

Esman said, "That leaves it up to the mayor and police chief to interpret, based on their own standards of what might make the city look bad."

"Social networking sites have become a forum for both local issues of great importance as well national and international importance," the lawsuit stated, comparing the city's policy to foreign governments restricting Twitter feeds by dissidents.

"This type of restriction strikes at the very core of First Amendment rights and is antithetical to the values of a free society," it said.