The New Orleans Saints have listed Jonathan Goodwin as questionable for Sunday night's game in Dallas, raising the prospect that second-year pro Tim Lelito will start at center for the first time. 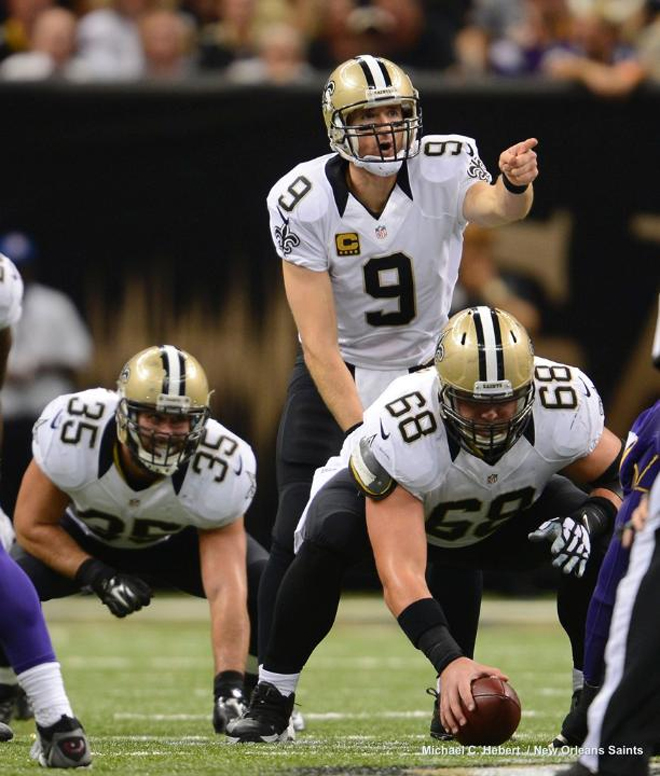 METAIRIE, La. (AP) - The New Orleans Saints have listed Jonathan Goodwin as questionable for Sunday night's game in Dallas, raising the prospect that second-year pro Tim Lelito will start at center for the first time.

Goodwin injured his left ankle during the second half of New Orleans' 20-9 victory over Minnesota last Sunday. He was replaced with 6 minutes left in the third quarter by Lelito.

Goodwin did not practice on Wednesday or Thursday and was limited in Friday's practice.

Lelito filled in only at guard as a rookie, and his first career-action at center last Sunday got off to an inauspicious start.

Quarterback Drew Brees, standing in shotgun formation, was unable to handle Lelito's first snap and the play went for a drive-stalling loss.

Brees said he should have been able to corral the snap, but Lelito asserted, "It was a lot my fault."

"It was poorly placed and it was coming in really hot, so first-snap jitters I guess," Lelito added. "But after that, I settled down. ... For the most part, I played well."

There were no significant missteps for Lelito after that, and New Orleans offense was effective during two long drives in the fourth quarter, one of which covered 90 yards touchdown, while the second covered about 70 yards and ran the final 7 minutes off the clock.

"He played well, settled in and did some good things," Saints coach Sean Payton said.

The Saints expected Lelito to perform well, having nearly made him their starter anyway.

While his only action as an undrafted rookie out of Grand valley State came in relief of injured right guard Jahri Evans, he spent most practices working as the backup to 2013 starting center Brian de la Puente, who has since moved to Chicago as a free agent.

Lelito then worked as the No. 1 center for much of the offseason, splitting time with Goodwin after he returned as a free agent for his second stint with New Orleans.

Payton did not name Goodwin a starter until Week 1 of the regular season, though he seemed to have made up his mind before that.

Right tackle Zach Strief, an offensive captain, described Lelito as "a guy we're comfortable with" after the snaps he took with the first team during the offseason.

"We said all along, it was kind of like, you're picking between two starters and one of those guys had to win and one of them had to lose," Strief said. "Timmy has grown a lot and Timmy had a lot to work with to begin with."

Lelito said coaches indicated to him that he was close to winning the starting job.

"It was a tight battle the whole way through," Lelito recalled. "It's Jonathan Goodwin who's been in the league - what - 13 years now? So I thought to myself at the beginning that, 'If I can beat him out, then I know I'm for sure ready.'"

Ultimately, Goodwin proved he was still in playing shape and his experience offered coaches far more certainty at the position - not to mention a longer relationship with quarterback Drew Brees from their previous five seasons as teammates from 2006-10.

So after that decision was made, Lelito said he "just kept working with Jon, kept getting better."

While Goodwin was unable to practice this week, he still attended the sessions, making himself available to Lelito for advice.

"As much detail as I can work and get from Jon, the better," Lelito said. "He's definitely helping me out there."