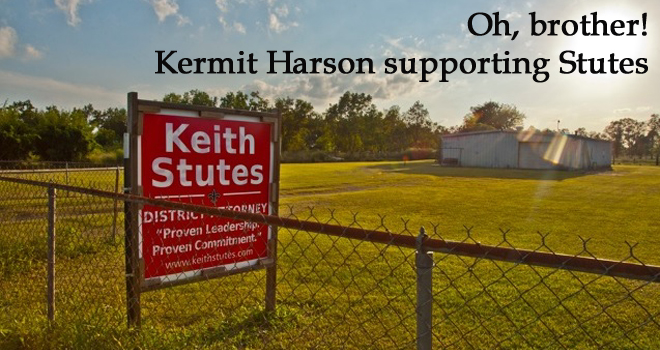 "[Mike] is no longer the energetic ADA that his recent ad is trying to portray. I just think Mike needs to get the hell out." - Kermit Harson, DA Mike Harson's brother 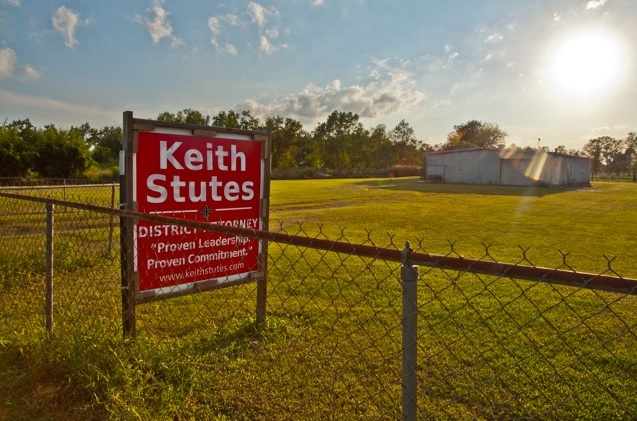 Back in the day when Mike Harson was a young assistant district attorney, his older brother Kermit was one of his biggest fans. Mike Harson was an effective prosecutor, Kermit recalls, one who was tough on crime. Harson's latest TV spot - well, at least the beginning of it when it mentions Mike being a tough felony prosecutor before becoming DA - reminds Kermit of the brother he says he once knew. "It starts off very true," Kermit says.

"I was proud of him when he was an assistant," 71-year-old Kermit says of his now 65-year-old brother, who has been the top prosecutor in the 15th Judicial District for the past 20 years, first elected in 1994 in a special election after serving as ADA under his mentor Nathan Stansbury for more than a decade. "He got some death penalties nobody else had gotten for years." 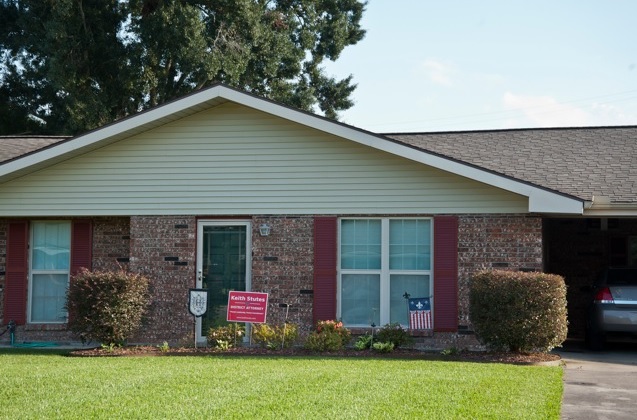 Kermit, who worked four decades as an X-Ray technician before retiring from Our Lady of Lourdes, says his pride quickly turned to disappointment after his brother was elected (and he's far from the first person to share this sentiment with The IND). "He is no longer the energetic assistant district attorney that his recent ad is trying to portray," Kermit says. "Yes, at one time that was the situation, but that is years past. I feel he doesn't know where he is heading because he surely has forgotten where he came from."

Kermit does not agree with much of what is in the rest of the campaign commercial, which states that DA Harson is "tough on criminals" and "committed to the pursuit of justice."

"That little slogan, I laugh at it," Kermit says.

The Harson boys grew up in Lafayette and don't have much of a relationship today; Kermit did not elaborate on any other conflicts the two may have had. "There's a lot of other personal stuff, too," he says. "But that's between him and I."

Kermit says he is not sure how his only brother - their older sister died in May 2012 - spends his days now (Kermit says he used to stop by the DA's office but has not done so in years), but he's confident Mike gets a lot of playing time on the golf course and doesn't skip too many hunting outings. "The deal with the OWIs proves that," Kermit says. "That guy hasn't been around for a while."

Kermit is particularly disappointed by the pay-for-plea scandal that has plagued the office for 2.5 years (the feds say the bribery scheme went on for four years under Harson's nose) and resulted in three former employees pleading guilty to accepting bribes. Kermit blames his brother for much of that. "I think [the] DWI [issue] just broke his back," Kermit says. "He's got a different outlook on that particular charge compared to the average person," Kermit says, claiming Mike thinks the penalties for [OWI] are too severe. Kermit tells The IND Mike has made specific statements directly to him about OWI penalties being too harsh.

Evidenced by two campaign signs erected on his properties in Rayne, where Kermit resides, and in Duson, where the brothers share side-by-side tracts of land they inherited, Kermit Harson believes the next six years should belong to Keith Stutes, the retired assistant district attorney who is challenging his former boss on Nov. 4.

Mike Harson issued the following in response to The IND's questions about why his brother is not supporting him:

You have just convinced me that you must be on salary with the Stutes campaign. I was aware of the fact that my brother had met with my opponent, and I can't think of a lot of ways you would have known about him. My brother and I have been estranged for a number of years and anything he says would not be a surprise to me and he is entitled to his own recollection of events which do not agree with mine.

However, I think it is a very definite sign of desperation to dry to drag personal family issues into this campaign and shows a continuing tie-in between your paper and my opponents' camp.

For his part, Kermit insists this is not just a vote against his brother.

He says he sees in Stutes, 61, the kind of fire Mike once had. "I sure do believe in [Stutes]," Kermit says. If he didn't, Kermit maintains he would vote for no one: "I don't want to put a zero in there, for sure. I won't vote before I cut off my nose to spite my face."

Adds Kermit, "I just think Mike needs to get the hell out."