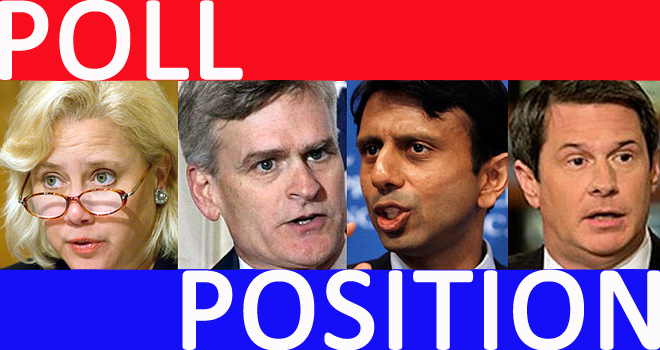 Is Mary fading as Vitter solidifies his lock on the fourth floor?

Is Mary fading as Vitter solidifies his lock on the fourth floor?

U.S. Sen. Mary Landrieu will make the December runoff following the Nov. 4 election. That much is clear. But Public Policy Polling's latest poll finds her slightly behind her chief rival, U.S. Rep. Bill Cassidy, R-Baton Rouge, in the head-to-head runoff - 48-45 percent. That's a slight tick in Cassidy's favor over a similar poll conducted in June that found the two tied at 47 percent.

Neither candidate is popular among voters: Cassidy has a 37/41 favorable/unfavorable rating while Landrieu stands at 42/52, suggesting she is the more polarizing of the candidates.

Among "likely voters" in the December runoff Cassidy's fortunes improve slightly; he leads Landrieu among those voters by a 50-45 margin. Stark racial contrasts in voter preference, predictably, also reveal themselves in the poll: Landrieu leads among black voters 89-7 percent over Cassidy while the congressman leads the senator among white voters 68-24.

Retired Air Force Col. Rob Maness, the tea party favorite? Eh, he appears to have locked down the status of also-ran, coming in 22 points behind Cassidy compared to 19 points in a late-July poll.

The PPP poll also reflected Louisiana values, or lack thereof, with the keg-gate episode. Sixty-one percent of voters said they either approved or don't care that Landrieu was photographed at a recent LSU tailgate party helping a Tigers fan do a keg stand.

U.S. Sen. David Vitter, meanwhile, remains the early favorite to replace Gov. Bobby Jindal, leading hypothetical matches against state Rep. John Bel Edwards 50-30 percent, New Orleans Mayor Mitch Landrieu (47-38) and Lt. Gov. Jay Dardenne (37-30). Louisiana's current governor remains one of the most unpopular in the United States, according to PPP: Jindal's approval rating is a dismal 34 percent compared to 55 percent of respondents who disapprove of the presidential campaigning job he's doing. Amazingly, by a 47-43 percent margin, respondents said they would rather have Edwin Edwards as governor than Jindal.