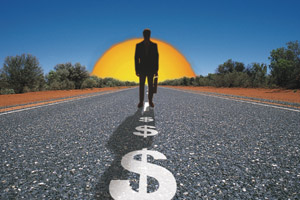 It arcs across southern Louisiana like a hazy rainbow of swamp gas, a notion born of demographics and disaster ' and the undeniable need to cast economic development in a new light. Some people can see it already if they squint hard. It's a 220-mile economic corridor along interstate highways from Lake Charles to Lafayette to Slidell, and proponents say a massive marketing campaign could bring it into focus and make it a magnet for business.

There's currently no name for this region, no catchy acronyms and almost every detail is in the infancy stage at best. Yet, those involved with this bold initiative seem certain ' even if they won't say so publicly ' that this is the best shot for the Capital Region and, ultimately the state of Louisiana to pull the economy in a bolder, more progressive, think-based direction.

"It makes a lot of sense," says John Davies, president of the Baton Rouge Area Foundation. "It needs to probably get done. But nobody has gotten together yet and said, 'How are we going to get this done? And how much is it going to cost?'"

In theory, getting Lafayette, Baton Rouge, Hammond, Covington, Mandeville, Slidell and ultimately Lake Charles to pool their economic development and political might makes sense. Especially if the strategic goals are to 1) develop a think-based economy by tapping into already existing assets, 2) force statewide political reforms that hinder economic development and 3) deal with the reality that New Orleans was losing economic clout before the hurricanes and is showing few signs, outside of tourism, of returning to its pre-Katrina levels.

The trick is getting these diverse cities to work together, something history says is rather difficult in a state that seemingly embraces parochialism. If Ascension, Livingston and East Baton Rouge parishes fight over a Bass Pro and if UL Lafayette and LSU are always butting political heads, then how realistic is it to expect economic development groups, politicians and higher education and research officials to sacrifice for the common good?

Although it's just an idea at this point, BRAF is bolstering the first leg of the corridor. BRAF's board of directors voted in late November to create a Northshore foundation in St. Tammany Parish.

"Historically, the Northshore has been considered part of New Orleans," Davies says. "Well, it's absolutely not. We're clearly building relationships on the Northshore."

Since Katrina hit New Orleans, 60 percent of the population and many businesses have left the Crescent City. But major companies have been moving their corporate headquarters for decades, beginning with Shell Oil in 1982 and culminating with Freeport-McMoRan this fall. The hurricane just exacerbated the exodus.

The Center for Planning Excellence in Baton Rouge won't release the numbers until January, but long-term projections show the Northshore growing at a phenomenal rate while the population of the New Orleans area declines. "With or without a hurricane, pre-Katrina or pre-Rita, we probably should have been looking at doing this," Lake Charles Mayor Randy Roach says of promoting the area as an economic corridor.

Davies says Baton Rouge and other cities along this corridor have an obligation to jumpstart the state's economic engine. Since New Orleans will have to rely heavily on tourism, other cities must make up the income Orleans Parish once provided.

"Somebody has to step into that [role]. You don't have to be a rocket scientist to look at the map and see who it should be," Davies says. "Baton Rouge, over time, needs to help fill that gap, and we can't do it alone. It makes sense that we will be driving whatever the business economy is in Louisiana."

Each major area along the corridor has its own strength.

Lafayette not only has UL but boasts a growing technology infrastructure, a progressive nature and a culture of risk-taking that dates back to the heyday of wildcatting. Lake Charles has the petrochemical industry and a port. St. Tammany Parish, which includes Slidell, Mandeville and Covington, is where most of the white collar workers who've been fleeing New Orleans for decades have landed. They're some of the most progressive and forward-thinking people in the state, especially when it comes to urban planning. And by every account, the I-12 corridor from Baton Rouge to Slidell is expected to explode in population over the next 40 years.

"Right now, there is no organized major regional [group] to invite people to Louisiana to be part of our future," Davies says.

But the cities along I-10 and I-12 could band together to form a region with a reputation for economic prosperity. Davies says those cities are connected by concrete, culture and crawfish, even if there are swamps and rice fields in between.

"It would seem that the high-ground business-oriented communities are those up and down I-10 and I-12. Do we purposefully pursue this idea of forming an identity around this corridor?" he asks. "I think the idea is not fully developed, but the numbers, the trends, are evident."

"This is a vision for something that could really be exciting," says Stephen Moret, president and CEO of the Baton Rouge Area Chamber. "I don't think today there's a specific proposal on paper, and at some point we're going to need to do that. Some aspects of this are going to happen, there's no question. There's just so much value to be had by partnering across these communities."

Moret says he's not sure about the western edge of the economic corridor, but it would certainly include Lafayette. Slidell is the obvious anchor on the eastern side.

"There's no question the I-12 corridor from Baton Rouge to Slidell is probably the hottest economic corridor in Louisiana for the next 20 to 30 years," Moret says.

And it makes sense. Baton Rouge has more in common with St. Tammany Parish than New Orleans does, Moret says. New Orleans is more of an island unto itself. "Right now, what we're talking about is an exciting concept. There have been some conversations, but this thing is in its infancy."

For it to work, the right community leaders need to have near unanimity in strategy and approach, Moret says.

It's essential for BRAC to work with organizations in neighboring cities to benefit the state as a whole. BRAC has partnered with New Orleans organizations on two recent initiatives: with GNO Inc. to help create tax credits for digital media development, and with the Business Council of New Orleans to campaign for levee board consolidation in the Crescent City.

"Our focus, our mission, is the Baton Rouge metropolitan area," Moret says. "That's not going to change. Having said that, there are things that happen outside the Baton Rouge area that affect us. If we could join forces with a few of our like-minded neighbors [as we did in New Orleans], then we can make things happen."

That's why BRAC has a legislative agenda to help business statewide.

The future of Louisiana depends on addressing long-standing public policy issues and developing the I-12 economic corridor from Baton Rouge to Slidell. The public policy issues Moret is referring to involve a monolithic task ' changing the state's reputation for corruption in politics and business.

Branding the proposed economic corridor as something that operates differently from the historical good ol' boy politics of Louisiana could be a way to combat the image problems.

Moret used the Raleigh-Durham area of North Carolina as an example. Though it's similar to Baton Rouge, it had to make changes much earlier because the textile and tobacco industries tanked decades ago, snuffing out much of the economic vitality of North Carolina.

But Raleigh-Durham made changes and marketed itself as an economic center apart from the rest of the state.

"They've got a lead of 30 years on Baton Rouge," Moret says. "There are some of the image aspects of Louisiana that are not going to change for some time."

But a separate identity for an economic development corridor in south Louisiana could help. "Identify competitive advantages of the corridor and market them aggressively," Moret says.

The first leg of the proposed corridor is the 94-mile stretch of I-12 from Baton Rouge to Slidell. The route is 30 miles north of New Orleans, which will be recovering from Hurricane Katrina for years to come. Many businesses have already left the Crescent City, but it has a major port and will likely remain a destination for tourists.

Getting the ball rolling toward the western side of the corridor may be a year away, Davies says.

"We're focused on the Northshore foundation and getting that started. And we're focused on all this planning stuff. We have more on our plate than we can say grace over."

Davies is referring to a $12 million project the Center for Planning Excellence has undertaken to help with the planning of south Louisiana cities since the hurricanes of 2005. New Orleans is participating with the center but using its own planners.

The center is working with the Louisiana Recovery Authority on what is being called "Louisiana Speaks," an effort to determine what residents want Louisiana to look like 50 years from now. A team of world-renowned experts ' including Calthorpe Associates, Fregonese Calthorpe Associates, Duany Plater-Zyberk and Co. and Urban Design Associates ' has been hired to work on the project.

Rob Guidry, president of the Greater Lafayette Chamber of Commerce, says I-10 is an economic corridor of sorts all the way across the country, but developing it and promoting it as such through south Louisiana makes sense. He says UL is a center for technological research. And he doesn't believe it and LSU would have problems working together on research projects and in other ways.

"Anytime anybody wants to talk about collaboration, I think that's a positive thing, and this chamber wants to participate," he says. "While we have a natural gravitation toward the Baton Rouge area, I think it's prudent to pull in the Lake Charles area to be part of the team."

"I've just heard very general comments about it, more as a concept than an actual plan," says Roach. "I think the concept makes a lot of sense. The whole corridor is one of the most intensely traveled corridors in the country."