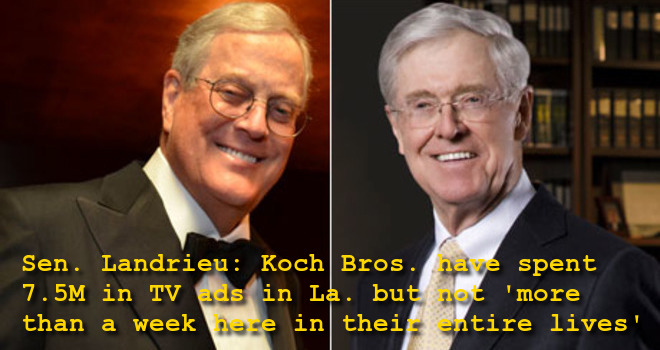 As of a month ago, the Koch brothers, through their affiliated advocacy groups, had paid for more than 4,900 ads in Louisiana. 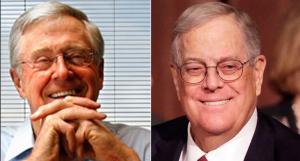 In 2007, in his second attempt at the governor's mansion, then-Congressman Bobby Jindal raised more campaign money than any candidate for state office in Louisiana history: $11 million. At the time, it was considered a staggering amount of money, made even more staggering when you considered what his closest opponents spent out of their own pockets. Walter Boasso, who finished in second place with 18 percent of the vote, put up $5 million, and John Georges, who received 14 percent of the vote, loaned his campaign $10 million. "The race was one of the highest-spending in Louisiana history," The Washington Post reported, and that may have been an understatement.

Consider this: In 1991, when Edwin Edwards faced David Duke in a run-off, the total amount of money raised and spent in that campaign was less than $4 million, and it was considered the most important gubernatorial election in the country. Donations poured in for both candidates from all across the country.

Suffice it to say, things have changed, and the money spent in the gubernatorial elections in 1991 and even in 2007 pale in comparison to the money currently being spent in Louisiana this year in the race for the U.S. Senate. According to the most recent reporting, which is now months old, Mary Landrieu has raised more than $14 million, and her main challenger, Bill Cassidy, has raised at least $8.6 million. But that only tells part of the story.

Charles and David Koch, two of the world's wealthiest men, have already spent nearly as much in the Senate campaign in Louisiana as Bill Cassidy, the candidate they ostensibly support, has raised in total. As of a month ago, the Koch brothers, through their affiliated advocacy groups, had paid for more than 4,900 ads in Louisiana. To be sure, those advocacy groups aren't required by law to disclose their donors, but as The Times-Picayune reports, "the Koch brothers have made little secret that they support the groups with donations." Back in February, the Koch brothers hired actors to star in a commercial attacking Sen. Landrieu's support of the Affordable Care Act. Quoting from a report by ThinkProgress:

The Koch-backed group Americans for Prosperity is out with a new ad featuring several people - who appear to be Louisiana residents - receiving notices in the mail that their insurance plans have been cancelled thanks to Obamacare. "Send Senator Landrieu a message: Obamacare is hurting Louisiana families," the ad concludes.

But the people featured in the hard-hitting ad aren't actually Louisiana residents at all. In reality, they're paid actors hired by the right-wing group.

The Koch brothers aren't the only outsiders spending money on advertising. Two days ago, the National Rifle Association launched a provocative television commercial warning Louisiana voters that Mary Landrieu wanted to take their guns away. The NRA's timing couldn't have been more off. The ad debuted on the same day that Landrieu and Senator Joe Manchin campaigned together at a shooting range in Maurice. But why does the NRA believe Landrieu wants to take your guns away? According to Politifact, the NRA based its argument on the fact that Landrieu voted to confirm Sonya Sotomayor to the Supreme Court and favored background checks at gun shows, a claim so egregious it earned a "Pants on Fire" rating.

Notably, this is the second time in only a week that a commercial attacking Sen. Landrieu has been rated as categorically false by an objective third-party fact-checker. Bill Cassidy's recent ad suggesting that Landrieu voted in favor of amnesty for illegal immigrants was thoroughly debunked by The Washington Post. Cassidy, the Post reported, put "his credibility on the line" by so brazenly lying about Landrieu's record. Months ago, the Post also debunked an ad attacking Landrieu, calling it "nonsensical." "Television stations in Louisiana should be ashamed of falling for such an obvious gambit," the paper argued.

False and misleading campaign attack ads aren't exactly a new thing, but because of the proliferation of outside money from anonymous donors in our elections, it's become increasingly difficult to hold anyone accountable and responsible for lying to voters and manipulating the facts. And this is troubling, because it distorts our political process and prevents the public from ever having a sensible debate and conversation on the real issues. It drowns out the voices of actual voters and allows billionaire brothers from Kansas and ideologues from Washington, D.C., to hijack an election that, presumably, should be about who is best equipped to represent the people of Louisiana.

When I spoke with Sen. Landrieu Tuesday, I asked her about the corrupting influence of money in politics, prompting her with a question about the controversial 2010 Supreme Court case Citizens United v. Federal Election Commission. Here is an excerpt of the transcript (emphasis mine):

Lamar: Recently, Justice Ginsburg called Citizens United the worst case of the current Court. Do you agree with that assessment? Would you support a Constitutional amendment to limit the influence of money in politics?

Landrieu: I agree that it is a very bad decision, and it's very hurtful, I believe, to our democratic process. Because what the Court did is say that corporations, like people, should be able to contribute unlimited and undisclosed money to affect the public debate. While individuals have a free right to speech and unlimited speech, it's clearly arguable if corporations are entitled to the same privilege. And what that does is it skews things.

Now, you know, I'm on the same side as John McCain. There are Republicans and Democrats that feel strongly about this. This is not necessarily a straight party line issue.

But people in this campaign are seeing the results of this out-of-control spending.

The Koch brothers have spent $7.5 million just in television ads in Louisiana, and I don't know if they've even spent more than a week here in their entire lives.