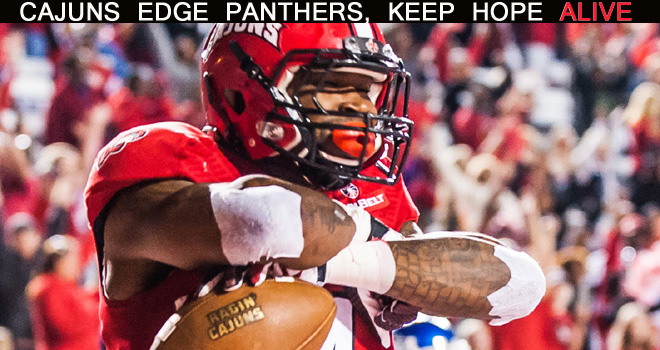 No one said ending UL's three-game losing streak would be easy. 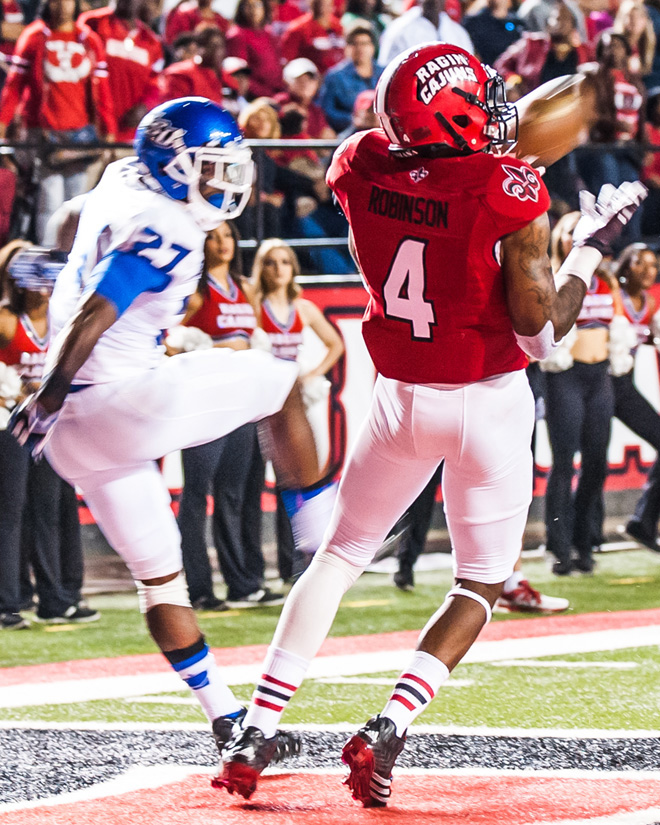 No one said ending UL's three-game losing streak would be easy. Georgia State is no Southern, the Ragin Cajuns' only win in six straight regular season games extending into last season. The Panthers (1-3) gained 549 yards on offense against Air Force in a 48-38 loss and even led Washington 14-0 at the half before falling 45-14. Their much-maligned loss to New Mexico State resulted from a touchdown with 15 seconds left. So it was no surprise the Cajuns had to extend themselves to edge GSU 34-31 Saturday night.

The game (see a photo gallery below) started in familiar fashion: A Panther back fumbled only to have a teammate recover the ball. Neither team had a turnover ensuring UL remains at the bottom of national forced turnover rankings.

Two plays after the fumble a face mask penalty against UL gave GSU a first down. The Panthers had 10 first downs in the first quarter, four by penalty; UL had two.

On the third play of UL's first possession Terrance Broadway completed a pass to Jamal Robinson for 14 yards and a first down. Coach Mark Hudspeth's call for team leadership has been answered. Not only did Robinson finish with 8 catches for 119 yards and 2 TDs, his presence opened up the offense and gave Broadway a reliable target. Most importantly, his toughness and desire are infectious. Three plays after Robinson's catch Elijah McGuire put UL up 7-0 with a 54 yard run, the Cajuns' longest of the season. Suddenly, the hopes and dreams of August seemed to return to Cajun Field, but only for a moment. Spectators soon realized they were to witness the longest 6:38 in Cajun Field history. 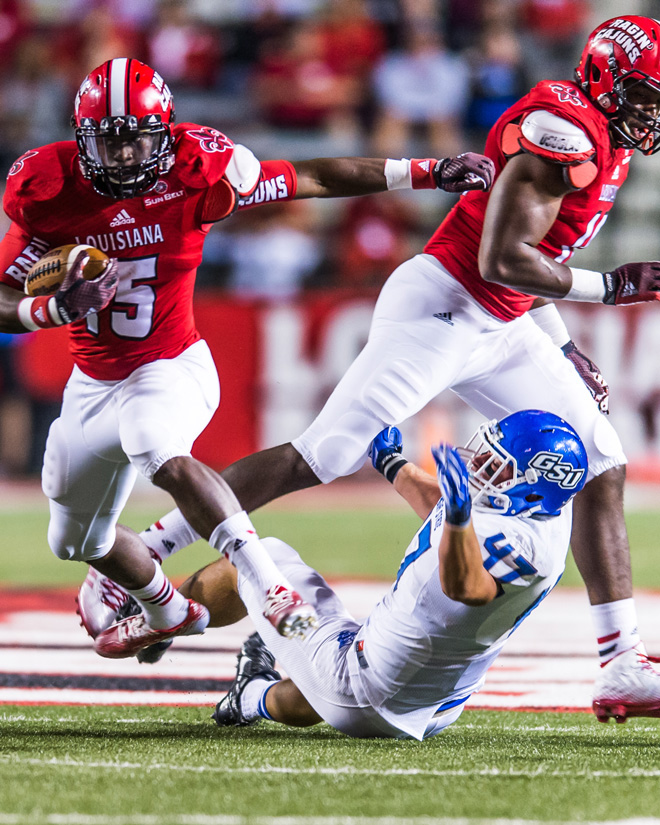 Like most drives Saturday night it started with a penalty, forcing GSU to start from its own 9 after the kickoff. The Cajuns held and on fourth and 11 from the 19 GSU lined up to punt. But the Cajun containment went missing and punter Will Lutz trotted 26 yards for a first down. An unsportsmanlike penalty added another 15. The Panthers worked their way to the UL 19 where QB Nick Arbuckle threw to the left behind the line of scrimmage. Trevence Patt hit the receiver, the ball came free, Corey Trim scooped it up and ran 81 yards for a UL touchdown. As players wandered the length of the field fuming or celebrating, the referee announced "an inadvertent whistle at the 25-yard line." Another UL unsportsmanlike penalty greeted the news. A review reversed the fumble but the penalty stood. The ball was returned to a grateful GSU at the UL 9, first and goal. An incomplete pass on second down was ruled due to pass interference and GSU had first and goal at the 6. Three running plays later the score was 7-7. The drive covered 91 yards in 16 plays and included a fake punt, four penalties, and a review that reversed a defensive touchdown. UL had possession for only 3:29 of the first quarter. GSU had the ball 11:31, but it seemed a lot longer.

In the second quarter Georgia State drove 96 yards for a 14-7 lead only to have UL respond with an 84-yard drive to tie the score. Both teams have adopted the template of modern college football: intricate spread offenses and defenses designed to make one or two crucial stops during the course of a game. UL's defense (and the clock) held GSU to a field goal on the last play of the first half, a crucial "semi-stop."

The pattern continued in the second half. The Cajuns opened with a 73-yard drive for a 21-17 lead. On its second possession GSU went 88 yards for a 24-21 lead. UL took the following kickoff and drove 75 yards (28-24). GSU took that following kickoff and drove the requisite 75 yards to once again regain the lead (31-28). UL took GSU's kickoff and drove for 75 yards to score its final touchdown. Unfortunately, the extra point was missed allowing GSU to kick a field goal to tie or go the usual 75 yards for a win. With three minutes left it was time for a "crucial stop" by the defense. Redshirt freshman DB Darius Hoggins answered the call by tackling a Panther receiver two yards short on fourth down.

Hoggins, QB Brooks Haack, who went 4 for 4 including a miraculous scramble and completion to Al Riles to keep the final drive alive while Broadway was treated (he returned to throw the winning pass to Robinson), and true freshman DB Travis Crawford, who had six tackles, demonstrated the deciding difference between the Cajuns and the Panthers: depth. The Cajuns have it, the Panthers not so much.