"I just want to know we are negotiating in good faith." - City-Parish President Joey Durel 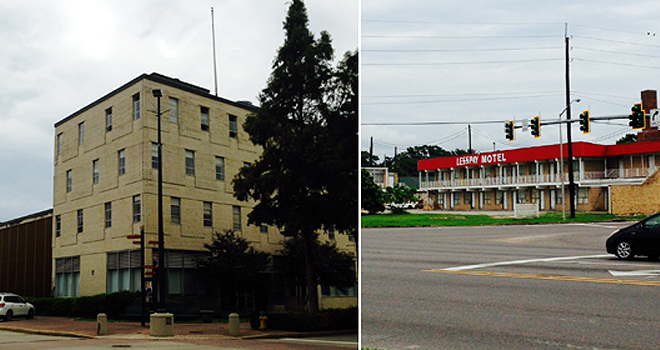 The old federal courthouse Downtown, left, and the Lesspay Motel at Four Corners

The LCG Council on Tuesday will consider a resolution "expressing support" for City-Parish President Joey Durel to begin negotiations and enter into financing deals that would lead to construction of police substation at Four Corners as well as the redevelopment of the old federal courthouse Downtown into a mixed-use retail/residential development.

The twin projects would include razing the seedy Lesspay Motel at the intersection of West University and Cameron streets. The old federal courthouse has been used mainly for storage by LCG since it was decommissioned more than a decade ago and costs consolidated government about $31,000 a year to maintain. The site also comprises the old Acadiana Open Channel building and former Lafayette Police Department main office - nearly a full block of buildings.

Increasing the number of residential units in Downtown Lafayette has been a primary goal of the Downtown Development Authority. Under terms of the deal, the Lafayette Public Trust Finance Authority would take title to the properties Downtown and oversee the redevelopment.

A similar plan for the old federal courthouse never got out of the starting gate back in 2010 when the council, comprising most of the same members, scuttled the deal. Some councilmen at the time said they were uncomfortable relinquishing the lease on city-owned property for a public-private partnership.

Durel, however, can proceed with the deal even if the council spurns the resolution. "I don't need a resolution to negotiate the deal," Durel tells The IND. "I just want to know we are negotiating in good faith."