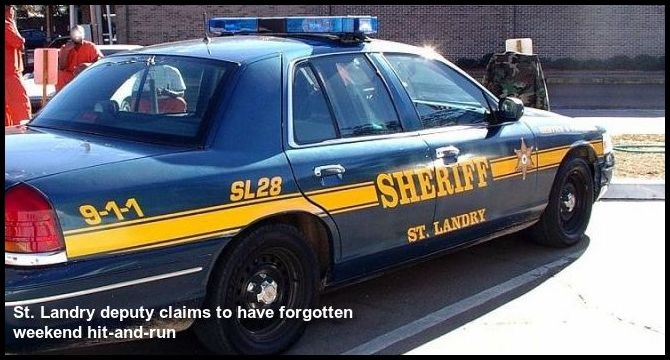 A St. Landry Parish Sheriff's deputy involved in an alleged hit-and-run will likely get off the hook because she doesn't remember the incident.

A St. Landry Parish Sheriff's deputy involved in an alleged hit-and-run will likely get off the hook because she doesn't remember the incident.

According to this report from KLFY TV10, Pauline Latiolais of Port Barre says she witnessed the weekend accident from her driveway when her neighbor, Sheriff's Deputy Captain Megan Vizena, came rolling through the neighborhood in her cruiser.

Vizena, however, passed up her driveway, and instead pulled quickly into Latiolais' driveway, striking the back of her vehicle.

Vizena didn't stop there, and after colliding with Latiolais car, she allegedly threw her cruiser in reverse and ended up in a ditch. She eventually freed her vehicle, pulled into the correct driveway, ran into the house and locked herself in, all while the cruiser remained running in the driveway.

Latiolais called the Port Barre Police Department, and was initially told that enough evidence existed to charge Vizena with hit-and-run.

"He told them [police] to turn her car off, give him the keys that he would take them and lock them in his office," Latiolais tells KLFY. "He told me that tomorrow morning when she comes to get her keys she would be arrested for hit-and-run."

That, however, is not what happened.

"The statute said the person has to have known that they were involved in the hit-and-run to charge them," Boudreaux tells the station. "We can't confirm that if she knew or not because when I spoke to Ms. Vizena the next morning and I asked her to tell me what happened she said she didn't know, she didn't remember."

Here's where the story gets even better.

According to Boudreaux, two green plastic shot glasses were found in a purse inside Vizena's vehicle, both containing alcohol residue. Yet, because Vizena had locked herself inside her home on the night of the incident, a field sobriety test couldn't be conducted, and therefore she can't be charged with DWI.

"Just by her saying a few hours later, Yeah I had too much to drink,' I can't arrest her for it," Boudreaux tells KLFY. "I mean I would of course use that in court but, of course she could always say, Well I was scared at the moment.' I need more proof than her just saying that."

Vizena was instead charged with reckless operation.

Latiolais tells KLFY she plans on filing a civil suit against the deputy.