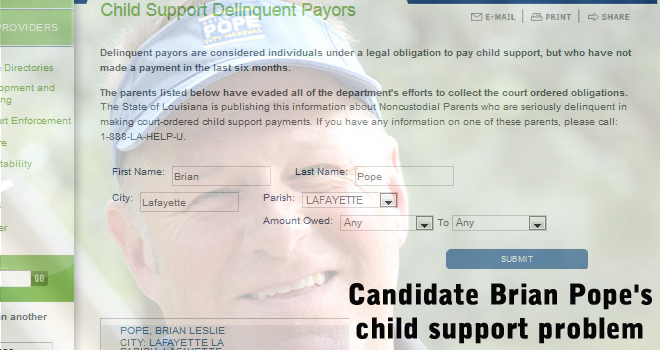 It took a judgment from the court to force the Lafayette city marshal candidate to pay his ex-wife $7k in past due child support.

[UPDATE: This story has been updated to reflect that Kim Ratliff Pope, candidate Brian Pope's ex-wife, declined comment on the child support issue.]

It's unclear how long Brian Pope and his ex-wife Kim's disagreement over past due child support went on, but what is known is that it took a judgment in state district court to force the Lafayette city marshal candidate to pay up.

On May 29, 2014, 15th Judicial District Judge David Blanchet determined that Brian owed Kim $6,934 for child support he had failed to pay. Court records (The IND was unable to obtain the entire file before the courthouse closed today) indicate that Brian still refused to pay, prompting a contempt of court hearing for July 23. At some point before that hearing, Brian did satisfy the judgment and qualified the following month to run for city marshal, having retired from the marshal's office after 20 years to run against his former boss (read more about the race here). On Sept. 2 his lawyer filed for cancellation of the judgment.

Despite having made good on the back-pay, Brian Pope still shows up on the Louisiana Department of Child and Family Services' database of dead-beat dads.

Brian and Kim divorced in March 2001, court records show, and in October of that year his child support for the couple's two sons was set at $700 a month. Pope tells The IND that amount was reduced to $350 a month in May 2010 when his older son turned 18. He says "the matter," presumably the child support dispute, was not filed until after the younger son turned 18.

According to Brian, the disagreement over what he owed was Kim's fault because she reneged on a verbal accord.

"The boys' mother and I had a verbal agreement that I would pay for their car insurance, which was on my plan, and deduct that from monthly payments to her," Brian says in an emailed response (one he had prepared, saying he anticipated this issue coming up). "It was never put in writing, so I ended up having to pay what amounted to $6,900 for over 7 years of child support. But the issue was resolved." 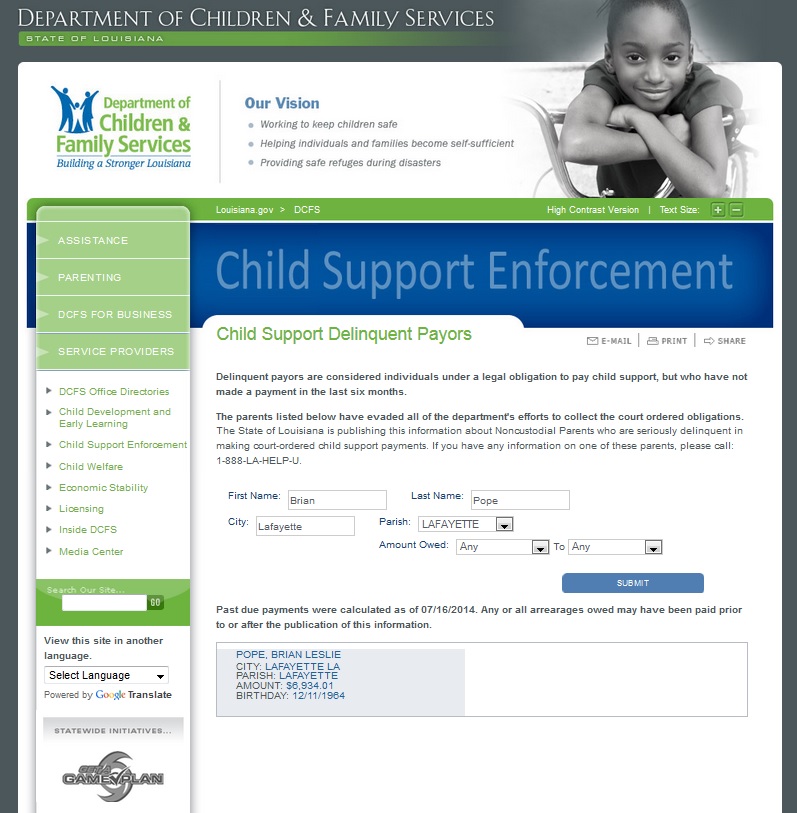 For unknown reasons, Brian Pope is still listed in the state's database of delinquent payors.

He continues, "My children mean everything to me and I have always provided for their every need. Anyone who suggests otherwise is trying to use a private family matter for political gain."

Brian Pope says he remarried 13 years ago; he and his wife recently sold their River Ranch home for $550,000, according to tax assessor records.

Kim Ratliff Pope declined comment for this story. "Out of respect and love for my boys, I won't comment on private family matters," she tells The IND.