The annual Top 28 boys basketball tournament returns to the Cajundome. 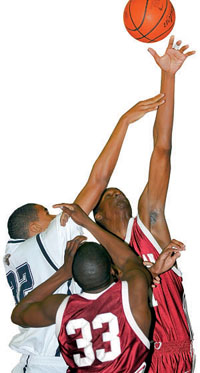 March Madness catches on early in Lafayette. Just ahead of the frenzy of college hoops’ NCAA tournament sweeping the nation, basketball fever takes over the Cajundome this week for the annual Top 28 boys basketball tournament.

This year’s tournament sets the stage for some of the top high school talent in the state and the nation. One of the biggest draws is in the Class 4A division, where the No. 1 rated high school recruit in the country, Greg Monroe, will try to lead Helen Cox High School out of Harvey to its first state championship. Monroe, who has signed to play college ball next year for Georgetown, is somewhat of an anomaly at the power forward position; he’s often praised for having quick feet and for being the best passer on his team.

In Class 5A, the largest division, Lafayette High School represents the only local team in the Top 28 field, as well as the most controversial story of the tournament. The school has come under fire recently for its decision not to suspend starting guard Josh Wiltz, who was arrested two weeks ago for the illegal possession of marijuana and a firearm. Lafayette High officials say they are handling the matter internally, and Wiltz has continued to start for the team, even hitting the game winning basket in last Friday’s playoff game. As a No. 2 seed in the tournament, the Mighty Lions have a good shot this year of becoming the first Lafayette team to make the Class 5A state finals since the tournament began being held here in 1997.

Check the Louisiana High School Athletic Association’s Web site at www.lhsaa.org for a complete schedule of tournament games. Tickets are $9 per person per session, and can be purchased at the Cajundome box office.