A California company's announcement that it has funding approval to take over north Lafayette's failed Couret Place leaves more questions than answers. 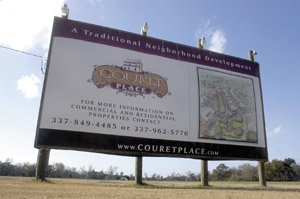 What last week appeared to be good news for contractors and creditors of the failed Couret Place traditional neighborhood development and the family that owns the north Lafayette land is creating more questions about the California company that claims it has a plan to salvage the project.

On Thursday, Jan. 18, Cal-Bay International, a publicly traded real estate development and investment group out of Carlsbad, Calif., announced that it had funding approval for a $400 million "residential/commercial golf course development project" in Lafayette. The company has been in negotiations for several months to take over the troubled 2-year-old project, a traditional neighborhood development promoted by Lafayette's enigmatic Royston family ' accountant John Royston, his son Kevin and Kevin's wife, Ronnie ' as north Lafayette's River Ranch.

On Friday, Oct. 13 ' three months before last week's announcement ' Cal-Bay issued a press release saying it was going to buy a residential and retail shopping center in southern Louisiana but did not identify the project at that time. When contacted by The Independent Weekly last December, however, Cal-Bay Vice President Bill Sickert confirmed that his company was planning to acquire John Royston's Couret Place Inc., pay the Buller family of Evangeline Parish for the land, and pay off what he estimated might be as much as $2 million in debt ("Couret Controversy," Dec. 6).

While that battle ensued, respected local contractors who performed work at the site ' one owed as much as $400,000 ' filed liens and lawsuits of their own against both Couret Place Inc. and the Bullers' Couret Farms LLC.

"Our goal at Cal-Bay is to make good with all of the local contractors," Sickert said in December. He also said 12 entities appeared to have put money down on 55 separate lots.

One person, who asked not to be identified, says he put $9,219 down on an option to buy a lot. The man says John Royston identified the parcel of land as one of his personal lots.

So why is the Jan. 18 announcement by a company promising to make good on Couret Place Inc.'s debts suspect? Because the Bullers, who still have title to the property, haven't heard a peep from Cal-Bay after imposing a Thursday, Jan. 18, deadline for the company to respond to their offer to buy the land. The Bullers' attorney, Marcus Fontenot of the Lafayette law firm Becker & Associates, says he's been negotiating with Cal-Bay because the company assured him in writing that it purchased Couret Place Inc. When the project broke ground in March of last year, the owners of Couret Place were identified as John Royston, Stephen F. Owens of Alpine, Calif., and a San Francisco-based entity called Lisar, a company that appears to be owned by an investor named Clayton Lee, according to court documents. Fontenot has yet to see any documentation of that purchase, despite repeated requests that Cal-Bay produce it.

By Monday morning, Fontenot still had not heard from Cal-Bay. "No phone calls. No letters. No e-mails," he says. "There's no deal, absolutely not. I don't know what they're doing," continues Fontenot, explaining that the Bullers' proposal calls for an outright sale of the property. "We're not interested in any joint venture. We were negotiating, but we had not reached an agreement. Our negotiations are, 'Here is the sale price, but you have to pay all these people.'"

Because Cal-Bay did not meet the deadline, Fontenot and his co-counsel, Wendel Fusilier of Ville Platte, say they will pursue litigation against Couret Place Inc. this week.

Yet another mystery is Cal-Bay's written descriptions of the project. The company says the development is on 177 acres, the size of the Buller family land, but calls it a "mixed-use residential and commercial golf course development" mapped to include the construction of 500-1,000 single family residences simultaneously with a 10-acre commercial/retail facility development. If Cal-Bay's plans include the nearby privately owned Acadian Hills golf course, the company has never mentioned it. The company says the project is expected to generate $400 million in revenue over the next three years and add $100 million to Cal-Bay's bottom line upon completion.

In October, Cal-Bay noted that its wholly-owned subsidiary, COBS Homes Ltd., would develop the project. But in a tersely worded press release dated Dec. 26, Cal-Bay said it had released COBS as its subsidiary and that the two companies were operating independently of each other.

Since it was announced two years ago, Couret Place had been heavily promoted by John Royston, a Lafayette accountant whose financial disputes with local business people led to numerous lawsuits against him from 1997 to 2001.

Despite the TND's failure to materialize and the Royston family's lack of real estate development experience, Couret Place appears to have been a financial windfall for the Roystons. For their sweat equity ' none of them put any money into the deal ' they were to receive options on a number of lots in the development, according to court documents. They also likely received hundreds of thousands of dollars in fees, according to the Bullers' attorneys. "Management fees" and "professional accounting fees," which it appears were paid to John Royston, totaled $226,000, according to an income statement John himself provided. Architectural intern Kevin Royston ' who is not licensed to practice architecture in the state of Louisiana ' was equally compensated for his role as "town planner," as that same income statement reveals that $300,000 was paid out for "architectural fees." Kevin's wife, Ronnie, got "marketing fees" of $6,000, and "sales commissions" of $14,600 were paid to someone identified as R. Royston ' presumably Ronnie.