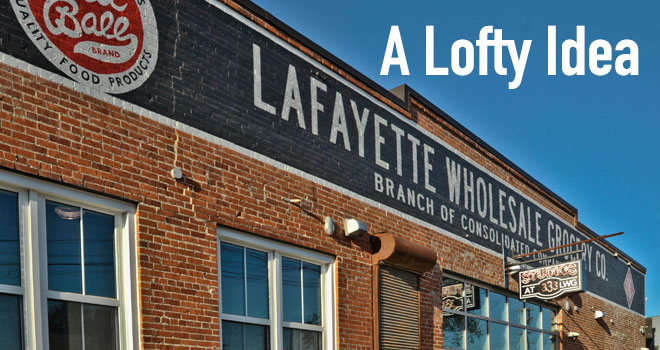 Downtown's newest live-work space for creatives doubles as a gallery for other upcoming artists to show their work. 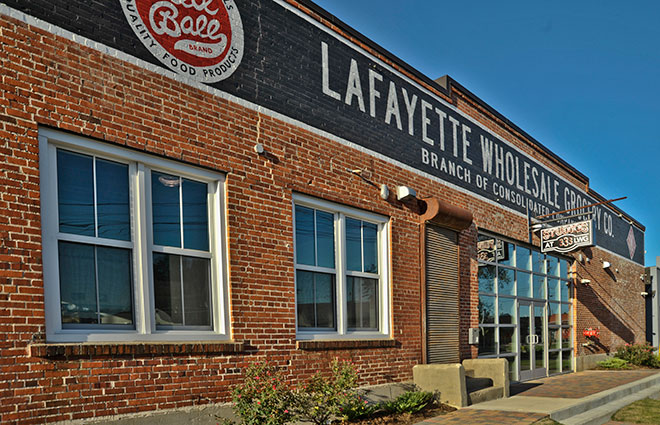 The Studios at LWG

Last summer, UL Lafayette students Jacob Danos and Brittany Boudreaux were your typical "starving artists" trying to make ends meet. Both are visual arts majors with a concentration in graphic design. On top of that, Boudreaux does photography, while Danos plays stringed instruments including guitar, mandolin and lute. Now the two aspiring artists have a built-in showcase for their craft at The Studios at LWG, where they live, work and run Gallery 333 inside.

The two found out about the property last year through a posting on Facebook. "We saw that the Lafayette Public Trust Financing Authority was considering purchasing it, and we just followed the whole process," Boudreaux says. "Once we saw that it was going to be artist lofts, we pretty much stayed on top of it."

On June 26, Danos and Boudreaux moved into their 500-square-foot, loft-style apartment with soaring 14- to 16-foot ceilings. "It feels pretty spacious for being as little as it is," Danos says. "We can use the lofted area for storage or working space."

The Studios at LWG was designed to create affordable unit workforce housing rentals for area artists.

LPTFA found space for the lofts in the former Lafayette Wholesale Grocery location at 114 Olivier St. Vacant for several years, the circa-1925 building was one of the oldest remaining brick warehouses in Lafayette.

During the application process, LPTFA gave an "artist preference" to individuals engaging in visual arts, craft, sound and performance art, film and television, theater, dance, music or literary arts on a regular or progressive basis. Seven units are rented at market rates, while eight are offered on a sliding-scale based on income. Currently, all 15 units are full. "The majority of people who live here are artists," Boudreaux says. "There are 17 or 18 people living here who do art or music - five do visual artists and the rest do music."

The couple volunteered to run Gallery 333, named for its address, 333 Monroe St. Works from residents, UL students and other local artisans are displayed in the main 500-square-foot gallery as well as in the widely spaced halls. An outdoor patio and stage are available for musical performances.

Gallery 333 opened its doors for ArtWalk Sept. 13. For its inaugural exhibition, the gallery exhibited works of approximately 20 local artists, most of whom were residents and UL students. Boudreaux and

Danos spread the word through Facebook, Instagram and "everyone we knew." More than 200 people showed up for the first show. "We had 75 RSVP on Facebook, and it really looked like we had about 200 people there, which was more than we expected," Boudreaux reports.

Based on the positive response, the couple plans to exhibit at every upcoming ArtWalk with additional art shows and musical performances in between. "From this point on, we should have live entertainment pretty much every time," Boudreaux says. "If we are ready, we plan on doing a small show from inside our apartment for the next ArtWalk where we'll play a couple of cover songs."

For the Oct. 11 ArtWalk, Danos and Boudreaux offered art and music both indoors and out from 6 p.m.-10 p.m. They filled the walls with works from students and budding artists who might not have the resources to display at other venues. "We have a lot of people interested, both residents and other local artists, in performing music for next ArtWalk," Boudreaux says. "And I think we are going to have even more artists next time as well, because we still had a lot of space to show more art."

The couple's goal is to get exposure for the area's students and other aspiring artists and musicians.

"Every artist that we are really friends with are UL students or just students in general," Danos says. "They don't really show around as much as a lot of other people. I think it's really a great space for that. I think we really get to show things that you wouldn't be able to see somewhere else."