[Editor's Note: Amid what's being called a "redesign" of the newsroom (for us at The IND, that would mean new carpet and fresh coat of paint), all Gannett employees are reapplying for their jobs. We can only imagine what that has done to morale at The Daily Advertiser and Opelousas Daily World. Below is former Gannett reporter and editor Jim Hopkins' analysis of what's likely driving the "redesign" and other, ongoing cost-cutting decisions. Hopkins' analysis was posted Monday on the Facebook page Ex-Gannett Employees Group. Let's hope we don't recognize the names of any new members of the group in the coming weeks.] 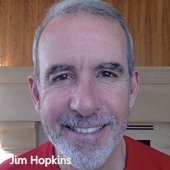 With just one week left before Gannett (parent company of Lafayette's Daily Advertiser and Daily World) announces third-quarter financial results, the company's stock continues to sink as investors show less and less enthusiasm for plans to split the company in two.

Shares are now down more than 20 percent since the spinoff of the newspaper division was announced Aug. 5. As I post this, GCI is trading for just $26.87 a share vs. a high that day of $35.70. That means it's entered "bear market" territory, a condition where investor pessimism can begin to snowball into even steeper losses. 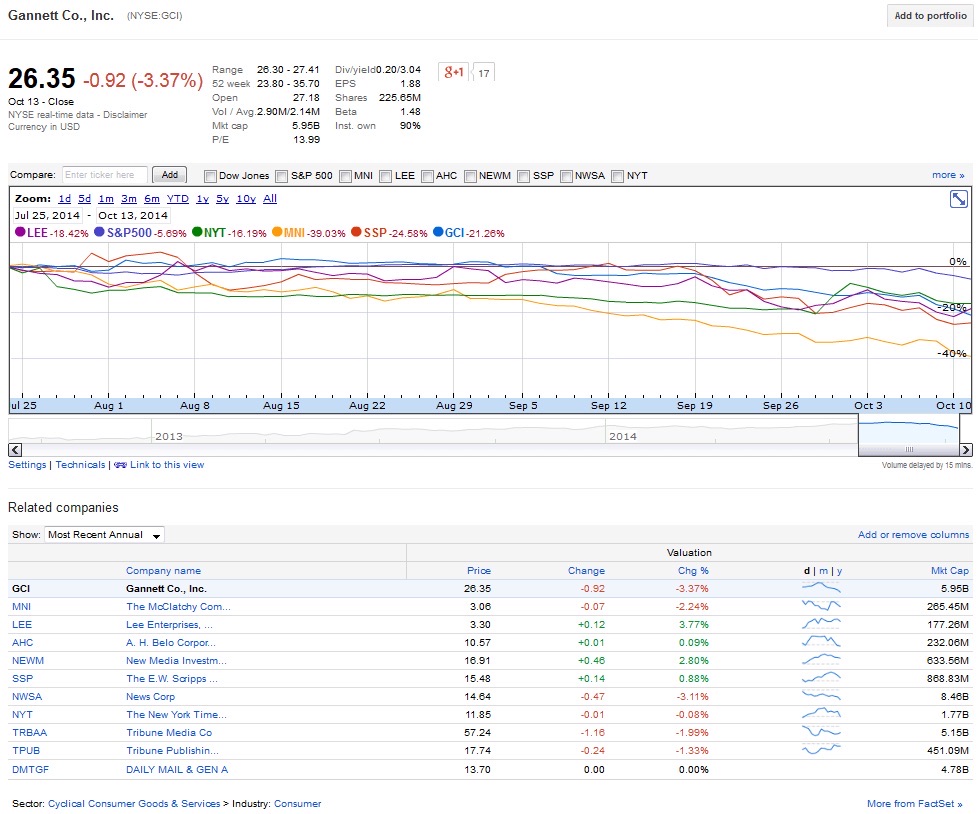 To be sure, other newspaper stocks have fallen, too - some more, some less. The stock chart above shows GCI's performance since Aug. 5 against the S&P 500 index, plus Scripps, McClatchy, New York Times Co. and Lee Enterprises. It ain't pretty. Click here for an updated chart.

As you can see, they're all lagging the S&P 500 index, a widely followed measure of overall market activity that's down less than 2 percent, even after a recent broad selloff.

This continued selloff raises doubts about the future of the spinoff, spurring speculation the company's No. 2 investor, Carl Icahn, might press corporate to instead sell individual newspapers one at a time.

When I last wrote about this subject in a Sept. 30 post, I noted that Wall Street's unhappiness with the spinoff plan was a big surprise because the deal was supposed to do the opposite: goose shares higher. Indeed, CEO Gracia Martore told investors in a statement announcing the split: "The bold actions we are announcing today are significant next steps in our ongoing initiatives to increase shareholder value."

Key among those investors continues to be one of the wolves of Wall Street, legendary corporate raider Icahn. He bought $476 million of Gannett stock over the summer with the expectation it would rise in value after the newspapers were spun off into a separate company owned by existing shareholders.

He paid an average $31.76 a share, according to regulatory filings. So he's now got a paper loss of 15 percent. Believe me, Icahn isn't a happy camper about that. When he first disclosed that he'd become the company's second-biggest shareholder, he said he planned to talk with Martore and the rest of the board of directors about his views on how the company should be restructured.

In early October, the financial news site Seeking Alpha floated a new scenario about what Icahn might demand: an outright sale of the newspapers, perhaps paper by paper. Under the headline, "What Is Carl Icahn Going To Do With Gannett?", the site wrote:

One thing that Icahn could do is push for a sale of the publishing assets instead of a spinoff. The sale proceeds could go towards paying down Gannett's debt load. Gannett's publishing arm remains the largest US newspaper publisher with 81 daily newspapers and more than 400 non-daily publications. Its newspaper assets if put on the block could attract the interest of Rupert Murdoch's News Corporation or Warren Buffett's Berkshire Hathaway.

Other possible individual buyers could include local, well-heeled investors in bigger markets like Louisville, Ky.; Des Moines, Iowa, and Wilmington, Del. Depending on its current financial health, USA Today might be the jewel in the crown. (Years ago, there was speculation Murdoch was interested in buying USAT for $1 billion, but that was before the newspaper industry cratered.)

Piecemeal sales could also benefit local communities where the buyers were civic-minded and willing to reinvest in the papers. But all the papers would need to be significantly rebuilt because corporate, seeking to shore up profits, has stripped them of critical assets, selling off or outsourcing presses, real estate, customer service, editing and other resources.

To the best of my knowledge, Icahn hasn't publicly disclosed any talks with management and the board since he first announced his huge investment. And he might never do so, choosing instead to take his losses and move on to another more promising deal.
But Icahn is tenacious. He got his way last month with eBay, basically pressuring the online auction giant to spin off its lucrative PayPal division after agitating for that move last spring.

We could learn more next Monday morning, when corporate announces third-quarter results and briefs Wall Street investors on the outlook for the current quarter. This will be the first earnings release since the spinoff plan was announced.

Jim Hopkins, a former Gannett reporter and editor for more than 20 years, published the independent Gannett Blog from 2007-2014.