Penelope misses out on being a perfectly charming princess fable —
by a nose. 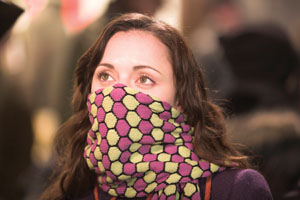 The makers of Penelope, like some of its characters, don’t know how good they have it. Producer Reese Witherspoon and first-timers Mark Palansky (director) and Leslie Caveny (screenwriter) are blessed with a charming fairy tale of a plot and the cast and setting to pull it off. They’ve got the perennially waifish Christina Ricci as an ugly duckling of a princess hoping to shrug off a family curse and the engagingly British James McAvoy as a possible Prince Charming.

Throw in a witty supporting cast and the city of London as a backdrop, and this mash-up of old and new fairy tales should succeed in equaling the sum of its parts. Instead, like Penelope, it’s rather uncertain of itself.

The movie’s production was conceived by Reese Witherspoon’s Type A Films production company two years ago, but had its own curse of delays until what seems like fortuitous timing: a release following the Oscar-nominated, late-2007 releases of the Disney fairy tale Enchanted and the James McAvoy/Keira Knightley bodice-ripper Atonement. If The Weinstein Company was hoping for some box-office mojo to rub off from these two films, well, that’s open to question.

What feels pretty certain is that Penelope will go down as one of the most well-intentioned disappointments of 2008, despite its few but decided joys, not the least of which is Ricci. Her Penelope carries the weight of the world: a four-generation curse in the form of a pig’s nose, sparked by a promiscuous blue-blood ancestor and made worse by confounded parents who are either over-protective (Catherine O’Hara) or ashamed (Richard E. Grant) of their daughter.

The world outside isn’t sure what to do with her, either. Lemon, a tabloid photographer (Peter Dinklage), wrestles with his own obsession capturing her ugliness on film — his first attempt earned him a permanent eye patch. A seemingly appropriate blue-blood suitor, Edward (Simon Woods), like many before and after him, runs away in horror at the first sight of Penelope, and through one of the film’s many tricky convolutions becomes Lemon’s ally in sneaking in another suitor to film the girl.

They believe they’ve found another blue-blood candidate in a down-on-his-luck rogue (McAvoy), who could use her family’s wealth to pay off his mounting gambling debts. This recruitment sets up the movie’s best scene, in which McAvoy’s character, having stayed behind after the latest cattle call of suitors, begins a flirtation via one-way mirror with Penelope that ends with him initially turning away at her piggish looks. The motivations behind his ambivalence at pursuing her are complicated; in their too-brief scene together, McAvoy and Ricci make a cute couple, he with his tousled hair and day-old growth, she with that innocent stare and child’s voice.

It’s unclear why Ricci hasn’t more consistently broken free from her child-star period of the early to mid-90s. Her sharp, observed work in 1997’s The Ice Storm and 1998’s The Opposite of Sex suggested an Oscar-level career, but for every Monster there seems to be a Black Snake Moan. What gives?

But when it comes to Penelope, perhaps one of the biggest problems is, Ricci rocks that pig’s snout. Ricci’s too cute by half; she’s a victim of her own charm, making all that “ugly” talk just that. Anyone who’s seen The Elephant Man knows what ugly is, and Penelope ain’t.

The greater problem, though, is the clunky way Palansky and Caveny move along the story. Blessed with a partly British cast and a London setting, the movie takes advantage of neither. Keeping Brits like Richard E. Grant and McAvoy from unleashing those suave accents is like taking scissors to Samson. And casting the comically gifted Nick Frost (of Shaun of the Dead and Hot Fuzz fame) as a card player and then giving him practically nothing to do is downright criminal. McAvoy comes and goes with continued randomness to the point of frustration. Likewise, sub-plots either go nowhere or not very far. After she escapes her parents’ estate to find herself by losing herself in the big city, Penelope discovers friendship in a pub featuring a smiling bartender (Richard Leaf) and a free-spirited patron (Witherspoon). The whole thing feels like an excuse to cast producer Witherspoon for either box-office appeal or a reason for her to be on the set. When she cracks wise a few short times, you’re left begging for more. It feels forced and inadequate, which is unfortunate considering Witherspoon’s own formidable charm.

Oddly, Palansky seems happier in the confines of the family mansion, with its promise of rocking horses, swings and Ho-Ho’s. And yet there’s a sense that he doesn’t want to fully tap his inner Tim Burton and let his palette explode so much as tease.

But by the end of Penelope, the lessons are learned, the matches made, the fairy tale reaching its predictable resolution. This is actually a great film for kids, assuming of course they’re unaware of Beauty and the Beast or Shrek. But the problem ain’t the nose; it’s the flaws behind it.