By sharing the final chapter of his life, Deacon Randy LeBlanc hoped to help - and set an example for - individuals facing terminal illness and their family members. 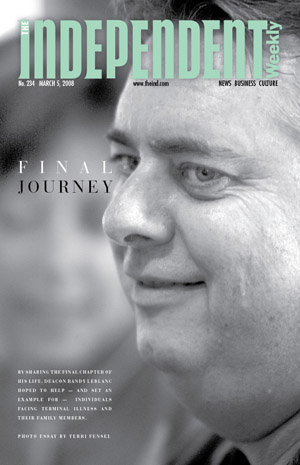 When he was a child, Randy LeBlanc discovered a bump on his forearm. He ignored it at first, but it grew a bit and became more irritating. Randy was diagnosed with eccrine carcinoma, a rare cancer of the sweat glands. Doctors removed the tumor and told him to be vigilant and constantly check for new lumps so they could hopefully thwart any return of the cancer.

For decades, Randy lived a rich life free of illness. He got married and had three sons and four grandchildren. He was general manager for Atlas Feed Mills in Breaux Bridge for more than 30 years, and he loved watching the New Orleans Saints and television cooking shows. A deeply religious man, Randy also became a deacon at St. Peter Catholic Church in Carencro.

It was August 2005 when he told his wife Sonya that he’d discovered a lump on his underarm. Randy underwent chemotherapy and treatment, but by summer 2007, the cancer had spread to his bones and couldn’t be stopped.

For the final chapter of his life, Randy wanted to be at home, surrounded by his family and friends. As part of that decision, he chose to use Hospice of Acadiana, the Lafayette nonprofit organization that provides care and support to patients with terminal illness and their families. (For more about Randy LeBlanc and Hospice of Acadiana, see “Leadoff” on P. 4.)

Randy also hoped that he could use his experience and help other individuals and families facing the same situation. For that reason, he and his wife Sonya opened their lives and home to Independent Weekly photographer Terri Fensel, allowing Fensel to spend time with them and photograph Randy on multiple occasions beginning in November 2007.

We are grateful to Randy and Sonya LeBlanc for their courage and for trusting us to tell one small part of their life story. — Scott Jordan, editor 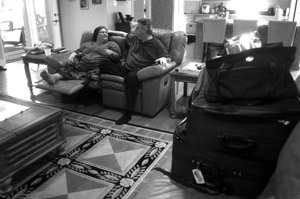 Randy and Sonya LeBlanc in their living room. The luggage nearby was for an upcoming vacation; while Randy knew the trip would be difficult and could make him weaker, he refused to cancel the couple's long-planned getaway and brought extra medication with him on the trip.
Nov. 15, 1:57 p.m. 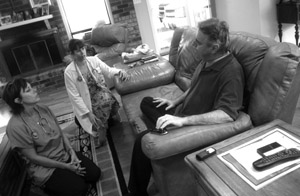 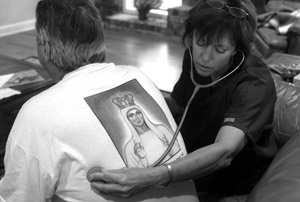 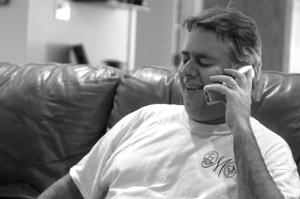 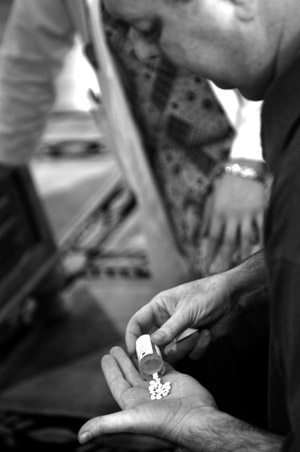 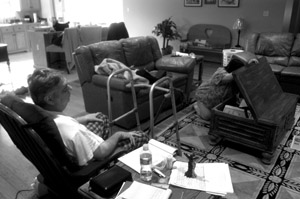 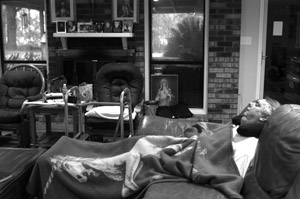 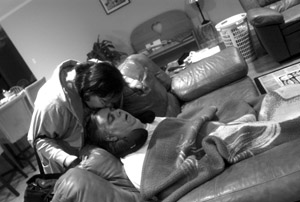 Sonya kisses her husband before she leaves to work a shift as a volunteer for the Roman Catholic Diocese of Lafayette.
Jan. 31, 5:52 p.m. 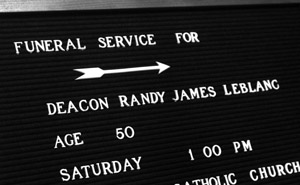 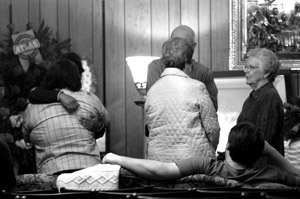 Sonya receives a hug as friends and family remember and honor Randy at his funeral.
Feb. 22, 3:57 p.m. 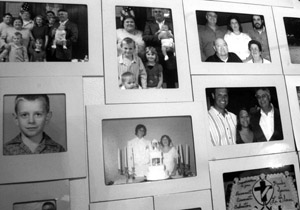 "Death is not an easy thing to understand," Sonya says. "The people who are dying struggle, and the people losing that person are struggling. Any time people needed help, Randy was there, and if sharing his experience would help others, he wanted to do it. Randy taught a lot of people a lot about dying."
Feb. 22, 3:48 p.m.