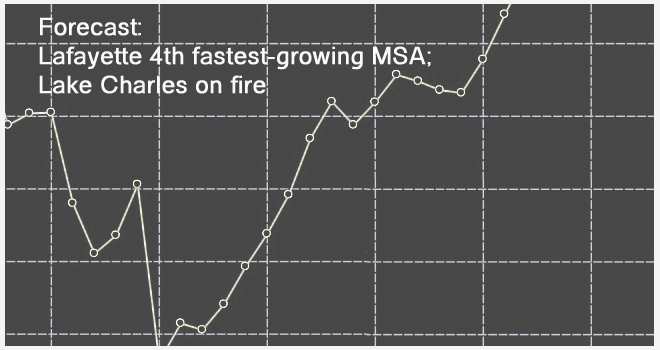 Economist Loren Scott says Louisiana is in the midst of an industrial boom unlike any other in its history, with more than $100 billion in industrial projects either under construction or in the engineering and design phase.

{igallery id=8377|cid=120|pid=1|type=category|children=0|addlinks=0|tags=|limit=0}In a breakfast gathering that got underway at 7:30 a.m. Thursday, economist Loren Scott delivered his annual Louisiana Economic Outlook to business leaders from throughout Acadiana. His message in a nutshell: both the state and local economies are strong, and the Lafayette MSA will experience "respectable" growth in 2015 and 2016.

But if you really want to see an economy on fire, look to our westward friends. In the next two years, the Lake Charles economy will explode, adding 12,000 jobs, a 12 percent increase. (The next issue of ABiz, which publishes Nov. 14, will focus largely on activity in Lake Charles region, along with the role local companies and the Lafayette workforce are likely to play.)

Scott says the Lafayette metro, which has been comprised of Lafayette and St. Martin parishes but will expand to include Vermilion, Acadia and Iberia beginning with 2015 labor data, will add 2,900 jobs in 2015 and 2,800 jobs the following year, 1.8 percent and 1.7 percent growth, respectively. 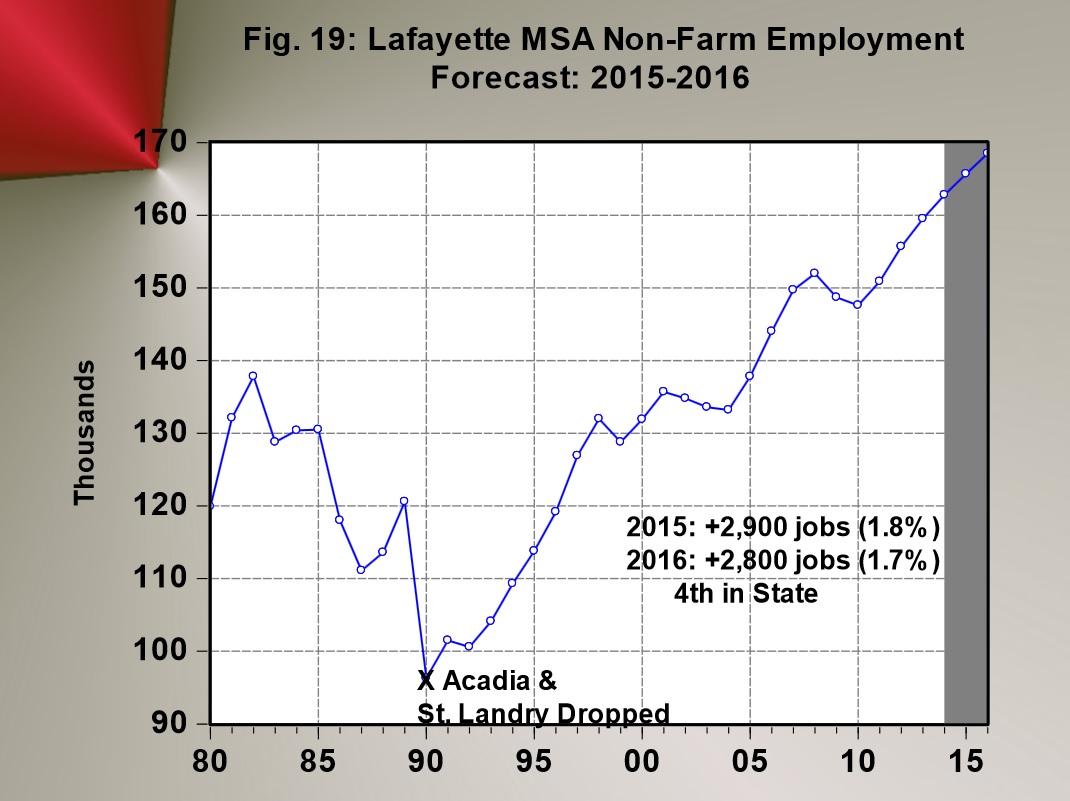 The LSU professor emeritus' predictions for Lafayette  - the report is co-authored by James Richardson, the John Rhea Alumni Professor of Economics at LSU - place the local metro fourth in the state. Its growth will trail Lake Charles, Baton Rouge and Houma.

Scott and Richardson have been studying the economy and compiling the report for more than three decades, and Scott has appeared in Lafayette for the past 11 years to deliver the duo's prognostications as part of ABiz's Entrée to Business event. The breakfast event is presented by IberiaBank and Dwight Andrus Insurance, with Billeaud Capital Management a supporting sponsor and Turnkey Title and Escrow, the Acadiana Economic Development Council and Cane River Pecan Company sustaining sponsors. Digital Media Sponsor is Vidox Motion Imagery.

And while the news Scott delivered has certainly not always been good, this year's report is replete with upbeat analysis.

"Louisiana is in the midst of an industrial boom unlike any other in our history, with over $100 billion in industrial projects either under construction or at the front-end engineering and design phase," the authors write. "Oil prices have the Gulf of Mexico surpassing pre-spill levels."

Forecasts in the report (which was finalized a month ago) are based on a slight decline in oil prices - but not the kind of recent drop that now has the price hovering at about $80 per barrel. Scott told ABiz Wednesday that he will not make any adjustments to the report in light of the recent dip but will discuss the potential impact at Thursday's breakfast. He says oil prices are the second-most difficult to predict - behind the weather! - and that even a drop to the range of $71 per barrel should not adversely affect the Lafayette economy because operators in the Gulf of Mexico would still be profitable at those levels. "It's going to make people nervous, make them slow down a bit," he says. 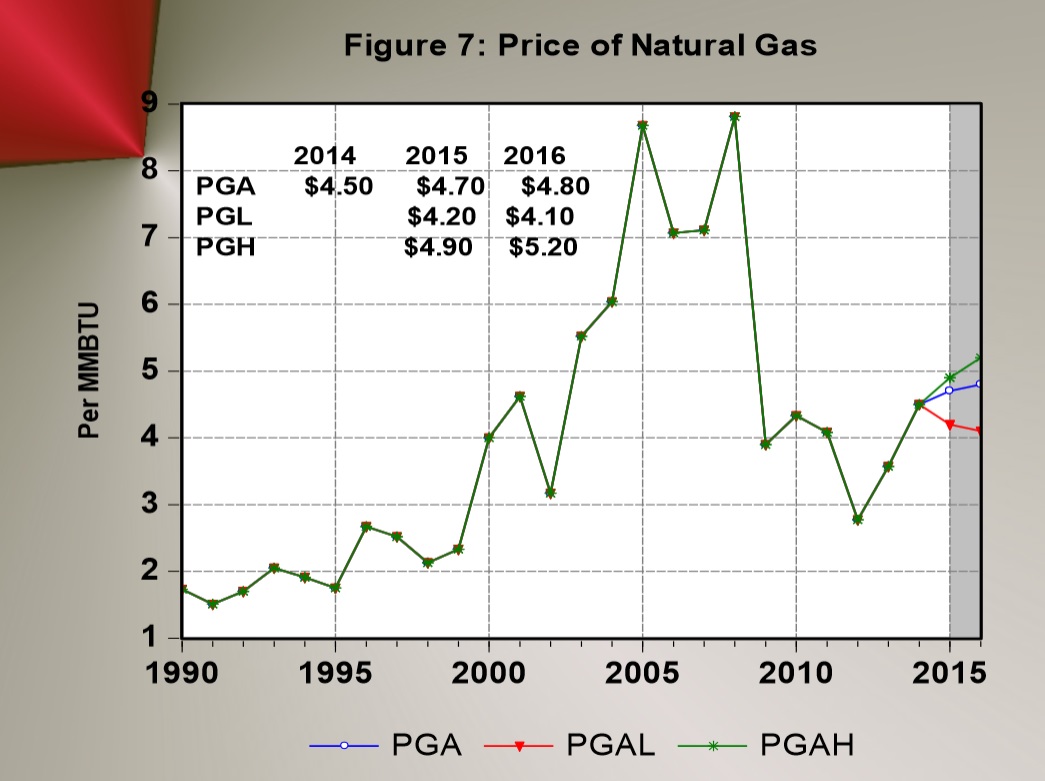 Economist Loren Scott expects natural gas prices to increase about 20 cents over the
next two years, staying just below $5 per mmbtu.

"Natural gas prices are pivotal to our forecast," Scott says. "We expect natural gas prices in the U.S. to creep up about 20 cents per mmbtu." He predicts the price will stay just below $5 per mmbtu, noting that the price of this fuel in Europe is likely to remain about three times higher, which will allow U.S. chemical industries to consume large chunks of Europe's share of the world chemical market.

Here's more of what Scott had to say about Lafayette:

A key to understanding this region's economy is its geographic location. Located in an oil-rich area and not far from the coast, Lafayette became a prime spot to locate service firms, fabricators, and other companies that do business with extraction firms exploring South Louisiana and in the Gulf of Mexico. Consequently, like Houma, the Lafayette MSA is closely tied to all aspects of the oil and gas exploration industry.

The MSA derives 11.1% percent of its jobs directly from the exploration industry, the highest concentration among the state's eight MSAs (the comparable number for Houma is 7.6%). Countless other jobs in the MSA are tied to the extraction industry through the multiplier effect.

There are four deviations from this pattern. Stuller Settings is a 1,170-person facility that is the nation's largest jewelry settings manufacturer. Acadian Ambulance is another large employer in the area whose ties are not all directly related to the extraction industry, although the firm provides air-med helicopter services to the industry. This company also monitors over 200,000 alarms in 40 states and monitors businesses and houses via videos, eliminating the need for guards. It has also recently developed a major safety program for offshore rigs and pipelines. A third, growing firm is the Schumacher Group, which provides ER and hospital medicine doctors to hospitals in 23 states. Finally, Lafayette is the home of one of the state's larger public universities - the University of Louisiana at Lafayette.

View Scott's PowerPoint presentation, which focuses on the local economy, here or access the full report on the state's economy here.