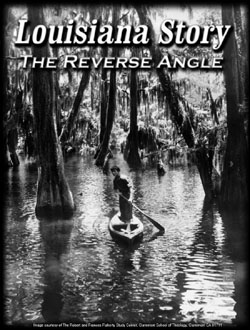 Commissioned by the Standard Oil Company in the 1940s, Flaherty set out to make a film reconciling industrialization with a pristine environment. A Cajun family, living an Edenic existence in the marshes of southwest Louisiana find their lives invaded by a drilling rig, which ultimately brings modernity, prosperity and knowledge of the outside world into their innocent existence. Flaherty, living in Abbeville with his crew during the filming, transcended what was conceived as a piece of propaganda for the oil company, creating a work of great lyrical beauty.

The film was nominated for an Academy Award for Best Writing, Motion Picture Story in 1948. Louisiana Story won the Venice Film Festival’s International Prize, and in 1949, Virgil Thomson won the Pulitzer Prize for Music for his score to the film. Doucet, who, with Fiddlers Four, has performed the score in concert, says Thomson collaborated with folklorist ,Therese Whitfield, who documented Cajun and Creole music in the 1930s and 40s, to create a score using authentic folk music themes. Darol Anger, one of the members of Fiddlers Four, composed and performed the original music for Louisiana Story: The Reverse Angle.