After the season's signature win (so far), here are some helpful tips for Cajun Nation during the conference stretch.

The middle of October not only marks the halfway point of the college football year it also begins The Holiday Season. For the next three months thoughts of conference races, bowl games, and the first national championship playoff will be constantly interrupted by buying and eating as one holiday follows another. The use of "To Do Lists" to keep obligations and schedules in order is recommended. As a service and to avoid writing my own here is such a list for the Cajun football community.

Go with "Light the Fire" instead of the venerable "Hold That Rope" as a motivational message. Your Texas State pregame pep talk was so stirring ESPN ran it twice. "Someone is going to get a chance to light the fire and when it happens sparks will fly and the whole team will catch fire!" It worked. On the second play from scrimmage Terrance Broadway found Elijah McGuire on a wheel route for a 62-yard touchdown. The sparks flew and the Cajuns caught fire. 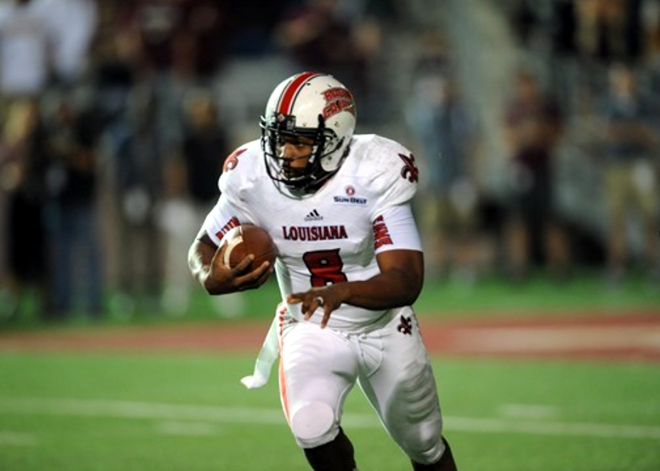 Let Terrance run. Against Texas State Broadway ran a career-high 19 times for 113 yards. And he seemed to get stronger during the game. After 65 yards in the first half he ran for 48 in the third quarter alone before sitting the last eight minutes of the game. In fact, let them all run. The Cajuns rushed 58 times, the most since the 58 carries last year against Arkansas State, arguably the best game they played in 2013. Or their best effort could have been the week before when they ran 52 times at Western Kentucky (37-20) or maybe a week earlier against Texas State when their rushing attempts hit 50 on the nose (37-20). The Cajuns are not in Mississippi or Idaho any more. UL's offensive line and talented backs should thrive in the Sun Belt.

Keep Chris Ringo, Justin Hamilton, Jacoby Briscoe, and Marquis White happy. The best defensive line in the Sun Belt keyed the season's best defensive effort of the year. When they play well everyone covers better, tackles better, and gets off the field sooner.

Schedule a Tuesday game or two every year. After losing their first two the Cajuns seem to have Game Day Tuesday down. Their three most recent Tuesday efforts are three of the best games the Cajuns have played in the last two years. You could even promote them. Call them Mardi Partie ("Tuesday game" according to my next door neighbor).

Lose the red pants. Lose the black pants. The Cajuns looked sharp in all-white. It's time for UL to adopt a classic look to match their perennial champion status. They looked bigger and quicker in white, and not just because they actually were.

Clear your calendars and be at Cajun Field October 21 for the Sun Belt Game of the Year. Arkansas State comes to town after a 10-day break as if they needed it after a 52-10 shellacking of Georgia State. Last year on a Tuesday in Jonesboro 24,578 watched the Cajuns beat ASU 23-7. In 2012 also on a Tuesday only 19,873 showed up to watch the Red Wolves whip UL 57-20 at Cajun Field. Both teams are 2-0 in conference play and the winner has a good chance of running the table. The crowd for the Cajuns' last home game was over 24,000 (allegedly) but many left with the game still in doubt. By the time the Cajun team finished celebrating and headed to the student section to shake hands there were more players on the field than students in the stands. The Cajuns found big plays Tuesday in San Marcos to "Light the Fire." Now it's time for their fans and fellow students to fan the flames.