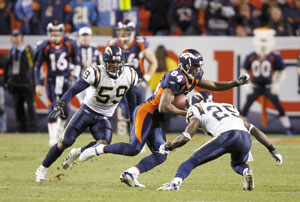 The Denver Broncos’ wide receiver corps was shaping up as an Acadiana showcase for the 2008-2009 NFL season. After Comeaux alum Brandon Stokley signed a three-year, $10.1 million deal with the Broncos last summer, it looked like Broncos quarterback Jay Cutler would be throwing to the pairing of Stokley and STM alum Javon Walker . But Walker, who missed most of the Broncos’ 2007 season with injuries, has bolted to The Black Hole and signed a six-year, $55 million deal with the Broncos’ archrival, The Oakland Raiders.

Sports Illustrated reports that terms of the deal call for Walker to receive $16 million in guaranteed money, and $27 million in the first three years. (Walker is slated to take the place of recently-departed receiver Joey Porter as the Raiders’ No. 1 receiver.) With that kind of contract, Walker has a lot to prove. He'll be trying to regain the form he showed in 2004, when he was the preferred target for legendary (and now-retired) Green Bay Packers quarterback Brett Favre, scoring 12 touchdowns and making the NFC Pro Bowl team.