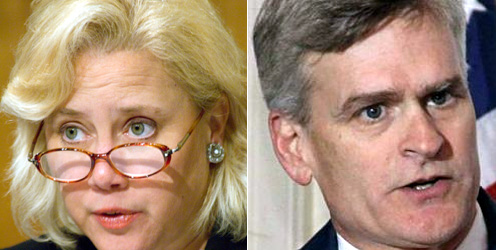 Sen. Mary Landrieu's campaign sees two avenues in stopping Congressman Bill Cassidy's Republican momentum: new registration figures and voter turnout. It would be an election upset to avoid a runoff, most consultants and pundits agree, but the strategy is moving forward in the hopes of striking gold.

While that's not nearly enough to sway an election, Democratic operatives contend a major last-minute registration push was made ahead of the recent cutoff date, particularly among black women. The Secretary of State's Office, however, is still conducting a review to verify new voters, with the results expected to be released sometime this week.

Republican models at this point are assuming the black vote will not get above 25 percent, most all of which would go to Landrieu and may not be enough to win in the primary. Even if she does manage to increase the turnout in black communities, Landrieu still needs to get closer to obtaining 30 percent or more of the white vote, a category in which she has been stuck in the low 20s in recent polls.

"Those are the magic numbers and I don't think they'll be able to reach them," said GOP consultant Roy Fletcher.

The one caveat Democrats are quick to add, an explanation for why they think a primary victory is possible, is the possibility that black voters are being under-sampled in polls.

"That does happen," Fletcher said. "But I'm not sure it means that this race is as close as some like to believe."

Dr. Silas Lee, a Democratic pollster and public policy professor at Xavier, said, "It's a reality and definitely a consideration for the campaigns."

Whether it's from having only a cell phone or no line at all, Bernie Pinsonat, a partner with Southern Media and Opinion Research, said most professional pollsters already take that into account.

"You have to bake that in," he said, adding there have been a few national polls that actually went in the other direction and over-sampled black voters.