How a massive toy recall affects Lafayette retailers and parents 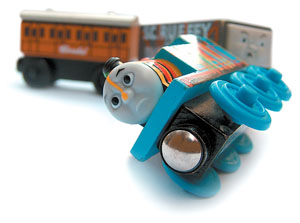 He's got his own video section at the Lafayette Public Library. More than 3,300 parents and kids turned out to see him and his friends at the Heymann Center on March 22. The Johnston Street Barnes & Noble features his train table in its children's book section to entertain youngsters, and that's not just the Lafayette store ' every Barnes & Noble store across the country has a Thomas the Tank Engine play area. And if the prices are a little steep ' ranging from $10 to $70 for one small wooden train toy ' you could always try bidding on one of the 6,000 Thomas auctions on eBay.

You'd better know exactly what you're getting before you bid. Last week, The U.S. Consumer Product Safety Commission and Thomas manufacturer RC2 Corp. issued a recall of approximately 1.5 million wooden Thomas and Friends toys; the list of 22 affected toys includes popular characters such as James and Skarloey and common pieces such as a stop sign and railroad crossing sign. The reason given for the recall is a parent's worst nightmare:

HAZARD: Surface paints on the recalled products contain lead. Lead is toxic if ingested by young children and can cause health effects.

The recall puts local retailers in the difficult middleman position. Barnes & Noble manager Drew Zeigler says all the Thomas items in question were immediately pulled off the store's shelves; Cullen's Playland owner Bob Cullen did not return calls for comment; and local management at Toys"R"Us referred all questions regarding the recall to its corporate offices.

"Recalls come in different ways, sometimes from the manufacturer or sometimes from CPSC," says Toys"R"Us spokeswoman Kathleen Waugh. "The minute we know something is going to be recalled, we send immediate communication to the stores and post recall notices in the stores. In this instance, it was on not all Thomas products, just certain ones."

Thomas manufacturer RC2 Corp. has not exactly reassured customers with its handling of the recall. The company initially declined to reimburse postage costs for replacing the hazardous toys but reversed course after consumer outrage, and its customer help line has been constantly busy after the recall announcement. (The Independent Weekly could not get through on three separate occasions.)

"We ask customers to have a bit of patience, but unfortunately it's difficult in this time because the level of calls has been extremely high," says RC2 Corp. spokeswoman Nancy Davies. "They will eventually get through."

While the CPSC has reported no incidents or injuries to date resulting from the Thomas toys in question, the magnitude of the recall and nature of the safety hazard has prompted widespread concern. Faced with the image of all those little hands playing with hazardous pieces ' or worse, toddlers putting them in their mouths ' it's no wonder parents have flooded Illinois-based RC2's telephone lines. Just don't expect the company to do much more than offer to replace the toys.

"RC2 Corp. is not offering to pay for the lead test and recommends following up with a pediatrician and insurance company or contacting the department of health to learn more about lead testing options," says Davies.

That response isn't surprising, according to Lafayette attorney Richard Broussard. "Generally, customers can send a written demand that these costs be funded, and the company will make a corporate decision nationwide," says Broussard. "That decision may be to stonewall, and it can get very complicated. They may, for example, point the finger at a company subcontractor and say that they're the ones responsible."

That's where the Thomas recall trail gets murky. The toys in question have been traced to a Chinese factory that manufactures toys for RC2 Corp. And disturbingly, RC2 Corp. has lots of company when it comes to recalled toys from China. In the last six months alone, there have been numerous CPSC recalls of hazardous toys manufactured in China ' almost 5,000 toy drums, 5,000 bamboo game sets, and 219,000 children's necklaces, bracelets and rings.

The outcome of the Thomas the Tank Engine recall ' and potential lawsuits ' could be a first step toward stricter regulations on children's toys. "Under the Consumer Product Safety Act, firms are required to tell us whenever there's a problem with a product," says CPSC public affairs specialist Ed Kang. "They have a very strong legal obligation to tell us. But we don't have pre-market registration, as in the case of the pharmaceutical industry, which has to have testing before it hits the market."

RC2 Corporation is not offering to pay for the lead test and recommends following up with a pediatrician and insurance company or contacting the department of health to learn more about lead testing options.