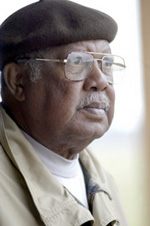 The third floor of UL's Dupré Library will soon house a center for scholars and students interested in studying the works of Ernest J. Gaines. The noted author who has penned several short stories and essays and seven novels - including The Autobiography of Miss Jane Pittman, A Lesson Before Dying and A Gathering of Old Men - became the university's writer-in-residence in 1983, a position he held for 21 years before retiring. He's now UL's writer-in-residence emeritus.

The creation of the Ernest J. Gaines Center was approved last week by the Louisiana Board of Regents, and the university announced yesterday that it would provide $250,000 to establish the center. Gaines has already donated some of his manuscripts and papers to the university, but according to a university press release, there's more to come:
"The proposal submitted to the Board of Regents states that the new center will also include 'all books, journal articles, essays, interviews, theses and dissertations on Ernest Gaines and his work. In addition, it would include a complete collection of all the published translations of Ernest Gaines's writing. It would anticipate, as well, the eventual donation/acquisition of the remaining Ernest J. Gaines papers to the university. It would be the site of the only complete collection of Ernest Gaines scholarship in the world.'" UL's English Department head Dr. Marcia Gaudet, who originally proposed the center, will serve as its interim director.