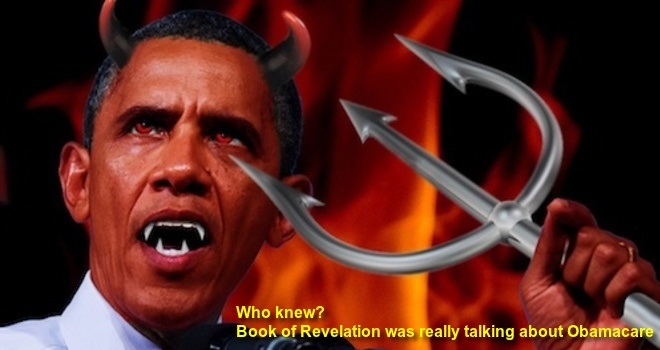 For all you red-blooded, church-going Americans out there unwilling to make a deal with the devil known as Obamacare, it's OK, there's now an alternative health care option that doesn't include an eternal fate of hellfire and brimstone in the fine print.

For all you red-blooded, church-going Americans out there unwilling to make a deal with the devil known as Obamacare, it's OK, there's now an alternative health care option that doesn't include an eternal fate of hellfire and brimstone in the fine print.

It's called Medi-Share, and it was recently given a rubber stamp of approval from our good friends over at The Hayride, a Louisiana-centric news blog with leanings that typically fall somewhere between conservative and the crazy on the political spectrum.

But The Hayride may be onto something from the looks of a recent email sent out to its readers laying out all the advantages of a Christian-styled health insurance plan.

"If the federal healthcare reform mandate has you seeking a wise and God-honoring choice for your healthcare, you'll find it in Medi-Share," according to a description posted on its web site. "Medi-Share members have a special provision in the law and are exempt from the requirement to purchase costly health insurance or face penalties!"

The Medi-Share plan is a direct answer to the attack on American values being waged right now by Obamacare, and its dreaded individual mandate. But the real miracle with Medi-Share is the savings: For a small monthly fee of only $300, an entire family can be covered.

While you must be among the Christian faithful to reap the benefits, it seems there's another catch to Medi-Share: It's kind of socialistic, albeit in a weird and bastardized Moral Majority kind of way.

According to the Medi-Share web site, members pay based off what they can afford to pay, with the wealthier among its 100,000 members helping make up the difference in cost.

And there's even more good news: By having a plan void of non-Christians, the overall costs will be way lower.

The reason for such great cost savings? Basic science, at least that's how Medi-Share puts it (in so many words): "Medi-Share members lead biblical lifestyles and have chosen not to share in the cost of medical care resulting from unbiblical lifestyle choices, such as abortion or drug abuse. That makes for a healthier group of people to care for, and a lower cost for our members."