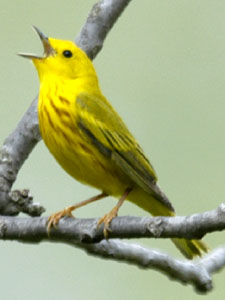 One of the sure signs of spring in south Louisiana is an armada of alligators, rising from the muck of hibernation to bask in the sun. And one of the best places to see enormous gators in the wild is the Sabine National Wildlife Refuge’s Wetland Walkway, along the Creole Nature Trial near Holly Beach, deep in the coastal marshes of Cameron Parish. The newly rebuilt mile-long boardwalk that extends into the wetlands will have a Grand Re-Opening Wednesday, two and a half years after Hurricane Rita swept the entire town of Holly Beach into the refuge.

Expect to see lots of shorebirds, nutria, rabbits, ducks, and waves of migrating neo-tropicals such as warblers, buntings, tanagers and orioles as they stop over on their long flight to northern breeding grounds. “The wildlife’s come back pretty strong,” says Capt’n Sammy Faulk, a fishing and photography guide in Cameron. So is tourism, according to Shelly Johnson, executive director of the Southwest Louisiana Convention and Visitor’s Bureau. “The reopening of the Wetland Walkway is a major milestone in the recovery of the Creole Nature Trail All-American Road,” she says. “Prior to the storm this great attraction saw more than 300,000 visitors a year, many drawn by the alligators, birds and marsh. We expect there to be a major upswing in the number of visitors in the coming months.”

Other recreational areas like Hog Island Gully, Blue Crab and Blue Goose Trail, in the refuge complex on the western side of Big Lake have also been refurbished with new fishing and crabbing piers, boat launches, observation towers, walking trails, informatin kiosks and restrooms. The Cameron Parish Refuge Visitor’s Center, on the eastern side of the lake, near Bell City, is expected to open this summer. For More information, contact the Southwest Louisiana Convention and Visitors Bureau at (337) 436-9588.