"Our confidence level is pretty high," LSU cornerback Jalen Collins said. "We stepped it up the past couple games and kind of shut down the Ole Miss offense, so we're feeling great." 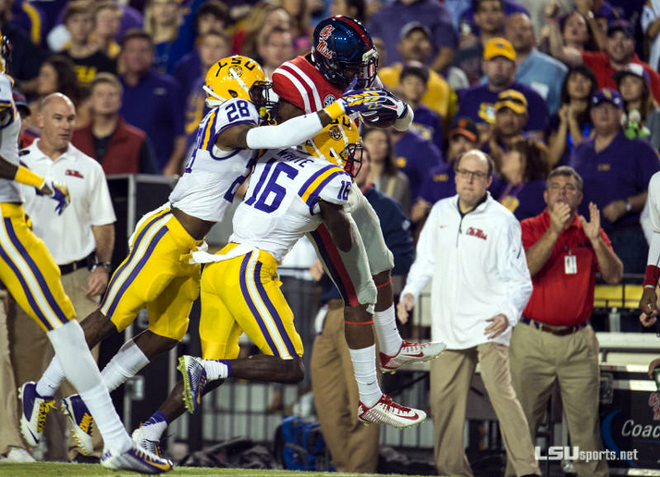 TUSCALOOSA, Ala. (AP) - Blake Sims' most memorable moment at LSU's Tiger Stadium came when he was exuberantly celebrating the winning touchdown two years ago from the sidelines.

No. 4 Alabama's quarterback is hoping to build more happy memories on the field Saturday night against the 14th-ranked Tigers, some of them presumably involving prolific receiver Amari Cooper.

The Crimson Tide's passing duo face probably their biggest test of the season in the LSU secondary. Ditto for the LSU defensive backs.

The Tigers (7-2, 3-2 Southeastern Conference) have scarcely given up more passing yards than Cooper is producing on average, setting up a major confrontation in a rivalry known more for punishing runners and tenacious defenses.

"Our confidence level is pretty high," LSU cornerback Jalen Collins said. "We stepped it up the past couple games and kind of shut down the Ole Miss offense, so we're feeling great."

So are Sims and Cooper after a record-setting connection against Tennessee in another challenging road environment.

Sims was a bystander on the last visit for Alabama (7-1, 4-1). That's when he was captured celebrating T.J. Yeldon's winning touchdown catch from starter AJ McCarron.

Then a backup, Sims' animated celebration included turning toward the fans and pointing at his ring finger.

"I looked down and there was a camera right there in my face and I was like, 'Man, I'm about to get in trouble,'" Sims said, smiling.

He'll be in the spotlight for what he does between the white lines this trip.

LSU is leading the nation in pass defense efficiency, giving up just 158.4 yards per game and six passing touchdowns.

Cooper is the nation's No. 2 receiver, averaging 141.5 yards with nine touchdown catches. He had a school-record 224 receiving yards in the Tide's last game against the Volunteers.

Only Arkansas has managed to shut Cooper down, holding him to two catches and 22 yards on a day when Alabama's offense managed season-lows of 227 yards and 14 points. The team that beat Alabama, Mississippi, is the only other defense to hold him under 100 yards (91 on nine catches).

"He's awfully smooth," LSU coach Les Miles said. "If you look at that receiver that has real speed and ball skills and can run the route, it's a talented man."

Only Auburn's Nick Marshall and Mississippi State's Dak Prescott - both of whom are drawing Heisman Trophy buzz - have topped 200 yards against the Tigers. Both also ran for 100-plus yards.

"They play a lot of man to man and they've got very good players," Alabama coach Nick Saban said. "They're very athletic. They've got nice-sized corners. They like to pressure. The combination of pressure and the man to man has affected people's ability to have any kind of efficiency in the passing game. Obviously it's going to be important for us to be able to do that, because I don't think you can be one-dimensional against them."

For LSU defenders, it's a change-up from recent meetings with Alabama's offense. The Tide still has a strong backfield led by Yeldon and Derrick Henry, but first-year offensive coordinator Lane Kiffin has found ways to get the ball in Cooper's hands early and often. He caught an 80-yard touchdown on Alabama's first play from scrimmage against Tennessee and added a 41-yard TD catch a few minutes later, a fairly effective way of quieting a hostile crowd.

LSU's defensive backs are looking forward to the challenge.

"What DB wouldn't want to go up against a team that's throwing it more?" Collins said. "It's always an honor to go out there and play but this is a really big game for us so I'm excited."